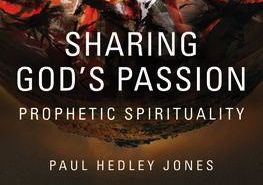 The Story of a Passionate God
Fifty years ago, the great Jewish scholar Abraham Joshua Heschel published The Prophets, a sprawling, two-volume study of Israel’s gadflies, God’s mouthpieces, the bearers of the divine pathos. After years of living with the prophetic texts preserved in the Hebrew Bible, Heschel settled on this conclusion: what lends the prophetic messages their coherence is “not in what the prophet says but of Whom he speaks.” God, passionate in anger and yet more passionate in showing mercy, is the true subject of the prophets’ witness. Israel’s prophets don’t so much record God’s speech as they inhabit it. They embody God’s witness against and for his people, and they bear that people into God’s presence.

Standing in Heschel’s wake, a new book by Paul Hedley Jones, Sharing God’s Passion: Prophetic Spirituality (Paternoster, 2012), aims to introduce a younger generation to this perspective on what comprises (depending on how you crunch the numbers) a third of the Hebrew Bible. “As Yahweh’s passions are inscribed upon the prophets,” Jones writes, “they become instruments in his hands, through whom he breathes divine sentiments of grief (1 Samuel 15.11), jealousy (Exodus 34.14), rejoicing (Isaiah 62.5), and love (Hosea 3.1).” The prophets convey God’s message, but they do more than that: they minister God’s presence to Israel and, thereby, to us.

Jones’ book represents a harvest of some of the best of “narrative theology”—“talking about God through stories”—making that popular academic approach accessible for a wider readership. Although it contains a bewildering diversity of genres, such as poetry, aphorisms, annals, and apocalypses, the Bible, Jones contends, is fundamentally a story, charting a plot with a beginning, a rising tension, and a denouement. “When Christian preaching fails to remind congregations of [this] whole biblical story,” Jones says, “our sense of identity falters and alternative stories that crown idols as gods become increasingly compelling.”

From that perspective, Jones’ book embarks on a whirlwind tour of the Bible’s prophetic texts. Moses (Israel’s first prophet, as it were; see Deuteronomy 18:15), Samuel, and Nathan make appearances, as do the more usual suspects: Elijah, Isaiah, Jeremiah. Lesser known figures get their own chapters: Deborah, Ahijah, Micaiah. And the book concludes with extended treatments of John the Baptist, Jesus (Israel’s true Prophet, to whom all the others pointed), and the church itself as a “prophetic community,” since “the mission of Israel and the responsibility of the prophets has been bequeathed to the church.” Each study concludes with discussion questions, tailored for church small group meetings or personal devotional reflection.

Not everyone (including this reviewer) will share Jones’ conviction that the prophetic mode of speech requires us to believe that human agency can cause God to change his mind. For Jones, “our speech and actions… supply the bricks and mortar paving our way through life,” and even God himself has to work around (or with) our free choices to make sure his plans are accomplished. According to Jones, for instance, Moses’ intercession on Israel’s behalf, for God to relent from his wrath towards Israel, “exposes God’s openness to be moved by his human partners.”

There is no doubt that a whole raft of Old Testament texts does indeed portray God as responsive, dialogical, relational, and emotional. Yet it would have been good to see Jones interacting with, or at least acknowledging in a positive light, the long tradition of Christian theological reflection—by no means limited to Reformed theologians with a “high view of divine sovereignty” but shared equally by Roman Catholics like Thomas Aquinas and even Arminian interpreters like John Wesley—which says that such Scriptural language must be understood analogically. God, being the Creator and not a creature, is not subject to the vicissitudes of human ignorance and passion; “the Glory of Israel will not recant or change his mind; for he is not a mortal, that he should change his mind,” as the Bible itself puts it (1 Samuel 15:29 NRSV). In this perspective, while God wills to have our creaturely participation in the plot of his story, he is not dependent on our obedience, or thwarted by our resistance, when it comes to achieving his purpose of showing mercy and revealing his grace in Jesus Christ.

Caveats aside, though, this book is a rich, winsome introduction to the Bible’s prophets—indeed, to the Bible as a whole—that will challenge, delight, instruct, and strengthen the church’s own prophetic spirituality today. It cries out not just for study but for embodiment—or rather, for the embodiment that is the truest means and goal of biblical study. As Jones puts it, “one’s wholistic response to God’s Word is the most meaningful interpretive act.” Amen.