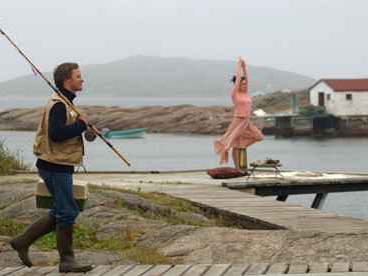 Features & First Impressions
1. Despite winning 14 awards at various Canadian and U.S. film festivals in 2003 and 2004 (including the audience award at Sundance), reviewers seem torn between praising this movie for its charm and pointing out its problems. What about you, what is your first impression of this film? What stands out to you as being either praiseworthy or problematic?

2. At the present time there are three re-makes of this film underway, an English-Canadian remake, a French remake, and an Italian remake. To what (if anything) do you attribute the desire to remake this film in local markets so quickly?

3. An important character in this film is the town itself. What do we know of this tiny Quebecois town of St.Marie-La-Mauderne?

4. How does the town appear? Why does it appear this way?

5. How might you describe the collective character of this town / its inhabitants?

6. What is this small town’s real need? How does the opening scene help serve to underscore this?

7. What is relationship to the larger city?

8. What other films can you think of that so features a locality and its collective character?

Key Characters & Story Resolution
1. Who are the main characters in the story? What do we know about these people? How are they each introduced to us?

2. What are their individual and collective struggles? What does this lead them to do?

3. How did the story conclude? Where you satisfied by that ending? Was their closure for Lars? Please explain why or why not?

4. How does Eve function in this film?

Basic Theme & Points of Interaction with Christian Faith
1. In light of discussion, how would you summarize what this film is and is not about?

2. Clearly, the town’s plan and execution of it is questionable. As a community of believer’s who value truth telling, what might we learn from this film?

3. Did the end justify the means? In what ways does every community wrestle with this?

4. Does such deception lead to happiness? Can a community really continue on the basis of deception?

5. What kind of honesty does it take to really live in, build up, and ultimately sustain community life?

7. What do you take away with you from your having viewed this film?

Did you know?
1. Harrington Harbour, where the film was made, is actually an English-speaking village, settled originally by people from Newfoundland.

2. This film was shot in just six weeks.

3. There was actually an English dubbed version of the movie which was very well done. Unfortunately it was only available on airline flights and for some reason they decided not to put it on the DVD release.