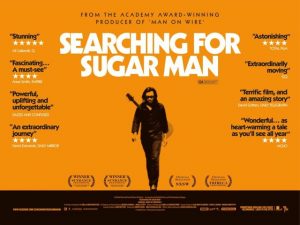 Portrait of an Artist in Exile
If you plan to see Searching for Sugar Man, please, stop reading this and watch the film first. Most films, in my opinion, should be viewed without introduction, if at all possible, but none more so than this. Should you ignore my warning, the review may do more than spoil the film’s drama for you; it may color your experience of it. I still feel guilty for reading Tolkien out loud to my children before they were able to know it firsthand for themselves. One of the many things they must forgive me for.

The safe details: Searching for Sugar Man is a documentary released last year by Swedish director Malik Bendjelloul. It’s had rave reviews at Sundance, Tribeca, and SXSW, won many awards, and been nominated for many more, including an Oscar for Best Documentary Feature. This is a well-made film. But even more important, it tells a good story, or perhaps I should say two good stories. Here’s where the line between safe and spoiler gets crossed.

Story #1
The first story is the story of how South Africa changed from a white-dominated police state to an open democracy. To be sure, only a small part of this story is told in Searching for Sugar Man, but for anyone who is an artist first and a historian later, it’s one of the best parts of the story. It’s the story of how art has the power to change what politics often cannot.

I know how this works. In Alabama, where I grew up during the 50s, 60s and 70s, while our parents were electing George Wallace governor four times, we were listening to Bob Dylan: “How many roads must a man walk down, before they call him a man?” No one quotes George Wallace anymore, not even in Alabama, but I still listen to Dylan.

While we were listening to him, white South Africans were listening to someone else. Cape Town record shop owner Stephen Segerman says that during the seventies every South African record collection contained at least three records: the Beatles’ Abbey Road, Simon and Garfunkel’s Bridge Over Troubled Water, and Cold Fact by Sixto Rodriguez. Yes, I know. This begs the Sesame Street question: which one of these things is not like the other? But, you see, South Africans didn’t know that no one in the United States had heard of Rodriguez. They thought that he was just another famous American rocker, and his music lit the flames of South Africa’s counter-culture.

Sugar man, won’t you hurry
‘Cos I’m tired of these scenes.
For a blue coin won’t you bring back
all those colors to my dreams.
Silver magic ships you carry,
Jumpers, coke, sweet Mary Jane.
[“Sugar Man” from Cold Fact]

The mayor hides the crime rate
council woman hesitates
Public gets irate but forget the vote date
Weatherman complaining, predicted sun, it’s raining
Everyone’s protesting, boyfriend keeps suggesting
you’re not like all of the rest.
[“This is not a Song, It’s an Outburst” or
“The Establishment’s Blues” from Cold Fact]

Forty years later the old sex-drugs-and-rebellion message in Rodriguez’ lyrics feels rather tired and generic, but his voice (imagine a cross between Jim Croce and James Taylor) and his simple sincerity give them an enduring power. And in authoritarian apartheid South Africa it was subversive, illegal (“Sugar Man” was banned by South African censors), and inspiring. A generation of Afrikaaner musicians turned to Rodriguez and his music for the courage to speak out against their own system. And as they followed in his musical footsteps, they wondered about his fate.

The two most popular stories of Rodriguez’ end imagined him committing suicide onstage after a concert. In version one after singing “Forget It”, he pulled out a pistol and blew his brains out.

But thanks for your time
Then you can thank me for mine
And after that’s said
Forget it.
Don’t be inane
There’s no one to blame
No reason why
You should stay here
And lie to me.
[“Forget It” from Cold Fact]

In version two he doused himself with gasoline and set himself on fire. Either way he was outrageous, rebellious, and mysterious to the end, at least in the minds of his fans. But neither tale is true.

Story #2
The second good story told by Searching for Sugar Man is the true story of Sixto Rodriguez, an aspiring folk rock musician in Detroit in the early 70s. His first album, Cold Fact, got a four star review from Billboard magazine, but failed to sell. After his second album—Coming from Reality (1971)—met the same fate, he abandoned his career in music, started work in demolishing and restoring old buildings, and raised his family. Quite simply, the artist turned from his art to the more mundane pursuits of family and community. But art has a way of refusing to be ignored even when we turn our backs on it.

If you’ve ever written a song or published a book, you know that once you turn it loose, it takes on a life of its own. People that you don’t know read it or sing it and find things in it that you never imagined. In a way you are connected to everyone who knows your work and at the same time alienated from them painfully. While no fan has an inalienable right to discuss art with the artist, every artist should have the chance to know the people touched by his art if he wishes to. Circumstances conspired to deny Sixto Rodriguez this opportunity for over two decades.

Then in 1996 South African journalist Craig Batholomew Strydom began looking for Rodriguez. Well, to be more accurate, I should say he began investigating the myths of his fate and found, to his surprise, that Rodriguez was alive and well and living in Detroit with no idea that he is a musical legend in South Africa. It’s hard to tell who was more surprised by this revelation: the South Africans, who had celebrated his music and the tales of his death, or Rodriguez himself, still working as a laborer. But surprise rapidly gave way to delight and plans for 5 concerts in South Africa. Rodriguez daughter, Regan, hoped that 20 people might show up so that her Dad wouldn’t be disappointed. 20,000 did. Every concert was sold out.

And they all lived happily ever after? Not quite. It’s estimated that Rodriguez albums sold around 500,000 copies in South Africa during his exile. A major mystery that remains is who got the money? Not Rodriguez himself. And in a recent interview on NPR he washed his hands of the matter, declaring that he doesn’t know who got it and he doesn’t care. Of course, the cynic in me whispers, “That’s never true,” but it may well be so in this case. Since his renaissance Rodriguez has played five sold out concert tours in South Africa and has given away the money he made on them to family and friends. He still lives in the same old house in Detroit that he has for years.

One last footnote: critics of Searching for Sugar Man point out, rightly, that the story it tells is a bit misleading. Evidently Rodriguez toured New Zealand and Australia and sold lots of records there right in the midst of his supposed exile. It seems Bendjelloul is guilty not so much of misrepresenting the facts as selectively emphasizing some at the cost of others for dramatic purposes. If so, he’s not the first storyteller to do so, and if he needs forgiveness for this, then, I think, forgiveness is in order here for Searching for Sugar Man tells one heck of a story.

If you are an artist and wonder about the value of your work, please, watch Searching for Sugar Man. If you’re a cynic and need to hear a story that may shake your cynicism, watch it. If you’re simply someone who likes a good story, or two, watch it. You won’t be disappointed.