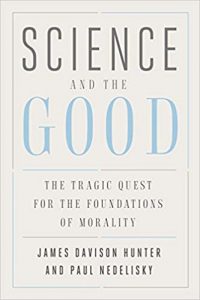 To be plausible a worldview needs to be able to account for morality. It’s not a surprise then, that in the modern era thinkers in the West, influenced by the Enlightenment, assumed that science rather than religion, tradition or revelation would provide an empirical foundation for right and wrong. For one thing, science had made admirable strides in all sorts of other areas, so there was every reason to hope that a science of morality could be developed. Besides, after so many centuries in which religion provided the basis for morality, competing visions of the good often resulted in discord and even religious wars. Surely science, with its emphasis on careful experimentation could move humanity past subjective notions of morality to an objective one that would prove credible to all neutral observers.

In Science and the Good: The Tragic Quest for the Foundations of Morality, James Davison Hunter (sociologist) and Paul Nedelisky (philosopher), both of the University of Virginia, tell the story of this important effort. And as their subtitle implies, they conclude that this modern science of morality—despite claims in the popular press to the contrary—has failed to credibly demonstrate that science can serve as the foundation for morality.

But has the new moral science actually brought us closer to achieving its aspirations?
Sadly, no. What it has actually produced is a modest though interesting descriptive science of moral thought and behavior. We now know more, to take one example, about what is happening at the neural level during moral decision-making.
Yet many of its proponents claim much more for these types of findings than the science can justify. While some of this overreaching is due to honest mistakes or misunderstandings about what science has shown, some of it appears fraudulent, designed to capitalize on science’s prestige and the public interest in practical moral advice. In the end, the new moral science still tells us nothing about what moral conclusions we should draw.
This is not happenstance. There are good reasons why science has not given us moral answers. The history of these attempts, along with careful reflection on the nature of moral concepts, suggests that empirically detectable moral concepts must leave out too much of what morality really is, and moral concepts that capture the real phenomena aren’t empirically detectable. Whether they realize it or not, today’s practitioners of moral science face this quandary, too.
But here the story takes a surprising turn. While the new science of morality presses onward, the idea of morality—as a mind-independent reality—has lost plausibility for the new moral scientists. They no longer believe such a thing exists. Thus, when they say they are investigating morality scientifically, they now mean something different by “morality” from what most people in the past have meant by it and what most people today still mean by it. In place of moral goodness, they substitute the merely useful, which is something science can discover. Despite using the language of morality, they embrace a view that, in its net effect, amounts to moral nihilism.
When it began, the quest for a moral science sought to discover the good. The new moral science has abandoned that quest and now, at best, tells us how to get what we want. With this turn, the new moral science, for all its recent fanfare, has produced a world picture that simply cannot bear the weight of the wide-ranging moral burdens of our time. [pp. xiv-xv]

This is a serious work of inquiry, not a quick read. It stretched my thinking but was worth the effort. I appreciate the careful way Hunter and Nedelisky explore their topic and the nuanced way they express their conclusions. Science and the Good is not merely an important study of an important issue for our time, it is a demonstration of how to disagree with civility, thoughtfulness and care in a pluralistic world.

I recommend Science and the Good to you.