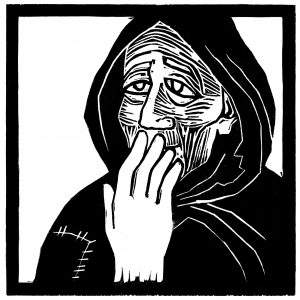 “Choose whatever you like!” We were sitting in the Bustard’s living room looking through a stack of original prints and the artist was making an offer we couldn’t refuse. Ned Bustard, editor, publisher of Square Halo Press in Lancaster, PA, is also a printmaker creating art, not with paint and brush, but with cutting tools as he chisels lines on a blank piece of linoleum block where figures, words and designs come to life in black ink. Indeed?! I chose three that captured my imagination.

Until recently I didn’t appreciate the skill and artistry of printmaking even though many great artists from Albrecht Drurer to Rembrandt often used this method for works of art that endure until today. Making a print image is usually limited to black and white – there are no shades of gray as there would be when using a pencil alone. Without a range of values, the direction, distance and width of lines becomes critical. When the block is finished, ink is applied and paper rolled across and carefully peeled off. And there it is – the big reveal. A number of prints can then be made from a block and kept for years even after the artist dies, which is why we actually own a print from one of Rembrandt’s originals. What was suddenly clear is that when you look at the finished piece, you understand the artist had to conceive the whole thing in reverse because what we are looking at is the mirror image of the print block.

As Ned spread his work I kept looking at him like do you really mean it? Any of these? I finally chose three that have become ever more meaningful as I continue to look at them framed and hung in our front hall. 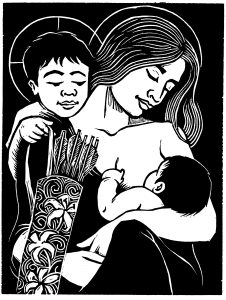 Mary
A tender moment is captured as Jesus looks over Mary’s shoulder while she nurses his younger brother. The artist points to the cross in the halo over this young boy. That is the clue that tells us this is not just any little boy; it is Jesus. Artists have traditionally placed a cross in the halo so we recognize him as the son of God. There is another clue to their identity, the lilies appearing on Mary’s quiver are a traditional symbol associated with the Virgin. The reason I like this so well is not only the quiet softness of the pose, but the reminder that being a woman caught in an intimate moment is perfectly blessed by Jesus. We can be at fully at ease in his presence with every feature of our bodies and in whatever natural role it fulfills while being human. 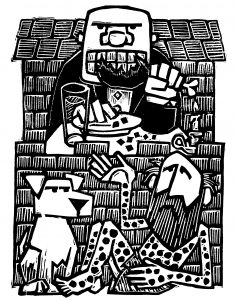 Lazarus
Jesus tells the story of a poor man named Lazarus. (Surely this name was intentionally chosen because of its meaning – “God has helped.”) He is terminally ill with leprosy. He is homeless and hungry. All his hopes are centered on eating a little garbage from the rich man’s table – leftovers no one else would want. He lies on the ground outside a gated community – the home of a wealthy man who would be a billionaire in our time. But this man has no time for the disgusting, stinky affairs of down-and-outers. The only beings to show compassion to this man are the dogs who lick his sores. The poor man dies and is carried into heaven by angels. There is more to the story, but here in this image, Ned captures the first chapter of Jesus’ story and it is powerful. The rich man looks directly at us with attitude. “Make Me,” he grunts, as he gnaws on a drumstick and crumbs gather round his plate. Beside him are a glass of water and a candle foreshadowing the unquenchable thirst and flames that are coming for him. Inexorably coming. Unable to sit or stand Lazarus lies alone, emaciated and dying. The dog stares into the distance as if he is witnessing something. Perhaps he sees, as animals sometimes do, that down the street angelic help is coming to bear Lazarus away.

All this is told in black ink on white paper. As it stares at me in our front hall – it is a reminder of the many good things about Christ our Lord; his tender love of the poor and the powerless, his rule against what is unjust. This is hope that despite the circumstances of our present world, of our current lives – for those who believe – ultimate help is on its way. Nothing will stop its eventual arrival. Amazing grace that extends to the world, to even me!

Thanks. Merci. Gracias. In Every language, God, I Thank You.
I love this piece that is simply titled, “The Leper.” This does not represent a parable or a story told by Jesus, it was a real event. Leprosy was the cancer of Jesus’ day. There was no cure. People knew it was contagious so there were strict laws regarding your conduct if you were unfortunate enough to have this disease. You were not allowed to live with your family or your community. You could not marry. You could not work. You must be isolated, cut off from every public venue from market to synagogue. You were forced to beg hoping that somehow you could acquire the barest necessities for living your short life until death. In public you had to shout “Unclean, unclean” as a warning to anyone in your vicinity. It was in this context that ten lepers saw Jesus in the distance. They must have heard about his power to heal. They shouted have pity on us. He did and their bodies were made whole. As the Jewish law required they ran off to show the priest. One, only one, turned back to say thank you. Thank you, God. He was a Samaritan, the despised foreigner the immigrant among the majority of the day.

This is the man Ned depicted with sadness in his eyes and lines of stress on his face hinting that until that moment, life had been without hope. With his fingers to his mouth, he cannot quite think of the right words, but behind his hand a timid smile is forming.

So, I ask, how does one say thank you for getting back everything that’s been lost? All you’ve ever hoped for? How do we express thanks for something we can’t repay? It would seem impossible. I don’t know how exactly. But not to try is bad for the soul because it does not acknowledge the giver. This incident tells us is that Jesus is perfectly aware of a person’s desire to be grateful, because he asks: “Where are all the others?” The words we say are not only for God, but for own benefit. Maybe even more for our own hearts.

‘Thank you’ is the best prayer that anyone could say. I say that one a lot. Thank you expresses extreme gratitude, humility, understanding. – Alice Walker

And Finally…
Lately I’ve had more cause for gratitude toward tech guys. Like the ones who built Ransom’s new website at Malley Design and for Rick, the guy who comes to my desk and waves a healing wand over my computer. I say “Thank you” to them and dedicate the following prayer: 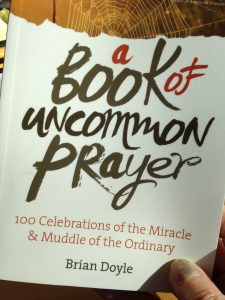 And then nodded politely at me and vanished. You wouldn’t believe how quick and efficient and deft and un-arrogant this kid was, and he looked to be about nine years old, although he had one of those awful chin-sprout goatees like strands of seaweed growing out of his face. He was on time, he asked me penetrating questions about the disaster and did not flinch when I used rude and vituperative language about the defiant machine, and then he sat down for forty seconds and instantly diagnosed and solved the problem. Nor did he then sneer at me for being a dolt, or crow over his triumph, or do a little victory dance while singing some horrifying modern music; he stood up, offered me my chair courteously, gave me his card with direct phone access in case of further questions, and slid away silently. We never say thanks enough for people who can do well the things that we cannot even imagine doing poorly; but this morning, for a moment you and me together, standing closely but not holding hands or any of that sort of thing, should do so. And so: amen.
-From A Book of Uncommon Prayer by Brian Doyle

And so … to you, too, may your tech work without flaw and at times may your life be device free.

(These essays were originally published in Letters From the House Between #1 2017.)