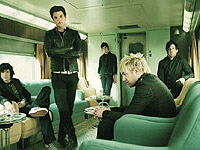 In the 1970’s, there was a young depressed and isolated man, a film critic, who wrote a screenplay which resonated personally with an up and coming movie director. Together they put on celluloid one of the more unique and controversial films in the last quarter century. The critic was Paul Schrader; the director was Martin Scorsese and the film, Taxi Driver (1976).

The reality is that depression and isolation are often catalysts for meaningful and necessary reflection. This rings true for Los Angeles based Rock Kills Kid frontman, songwriter, and guitarist Ryan “Hermit” Tucker. “Many of the songs tackle the same theme…which is just me dealing with isolation. For several years, I was alone, alone. I didn’t go out at all. So I had a lot of time to reflect on who I was.”

Tucker, along with guitarist Sean Stopnik, bassist Shawn Dailey, keyboardist and vocalist Reed Calhoun, and drummer Ian Hendrickson are a living homage of sound to the great bands and music of the mid to late 70s to mid 80s. From The Cure, Wire, Joy Division, Depeche Mode and U2 to more modern comrades in post-punk rock Interpol, Franz Ferdinand and The Killers, they are a hybrid of sound. For what it’s worth, Rolling Stone has declared Rock Kills Kid as one of the “10 Artists to Watch in 2006”.

Signing with Fearless Records in 2000, they released a five song Rock Kills Kid EP in 2001 but never really got off the ground. Reduced to living in Fearless’ studio and cleaning up with baby wipes, Tucker found ample time and valuable stimulus to write, a salvation of sorts. “I didn’t have anything else to do and writing became my cushion. I got used to it. Then I got addicted to it.” Before it was all over he had written upwards of 150 songs. Their debut album, Are You Nervous?, was recorded in February at Hollywood Sound in L.A. and comprises vast synth-rock edge and nervy rhythm resounding zeitgeist of both a generation past and present.

The highlight of Are You Nervous is the poignantly simple and resonating voice of their lyricism, which conveys a most basic human condition, isolation. It’s not merely the music and the lyrics but the backdrop which catalyzes and shapes both the identity of the band and their “fans”. It’s the story behind the stories. It is after all that most basic of human realities, emotion and experience, that generally encapsulates and defines ones identity.

Or is it? What does one typically utilize to help shape the identity of self? Is it relationships, education or a successful combination of both? On one hand, Tucker’s end could have been much like their predecessors frontman Ian Curtis of Joy Division , who ironically in 1980 just prior to his suicide sang “Isolation” on their second album Closer . Yet, he went a different route. It’s perplexing to consider how or why these routes are chosen or perhaps choose, but nonetheless it speaks to a sense of shrilling despair and hopelessness that seems to have enchanted our frustrated culture.

Reflections
Albert Camus notes in the opening line of The Myth of Sisyphus, “There is but one truly serious philosophical problem and that is suicide.” This in many ways encapsulates the angst of our culture’s existential cynicism and relates so well the walkabout, or wandering lost, mentality of our culture. Yet, in the same breath I must utter that though wandering, the Creator isn’t amuck in slumber and that the good news of the gospel of Jesus Christ offers hope where human behaviorism is impotent. We ourselves and our culture are in desperate need of compassion and grace.

Rock Kills Kid’s lyrics tend to hover in and around this theme of isolation and thus identity. What defines you? Is it the digits in your bank? The sewn patches on your high school jacket? The “success” of work? Essentially, the gospel declares that one is truly defined in light of the person and work of Jesus Christ and we aren’t going to overtly see this portrayed well in our popular culture. It seems intangible to state such an ideal for identity, like a Sunday paper cartoon, robotically predictable, yet it’s the gospel truth. It is here that our efforts to embrace common grace in our culture, integrated with honest gospel reflection that is at the heart of the Church’s calling. The apologia (see 1 Peter 3:15) or defense, of Peter’s urging implies that we be actively engaged and aware of not only our Christian position but our depraved condition from which we both stem in heritage and also to declare such gospel from. Now, keep in mind the context of Peter’s letter was one in which they’d been given an imperative question to consider, i.e. apologia for the hope which is, not merely in you, but that has been clearly discerned by another. In other words, do people notice a distinguishing difference in us? Do they sense hope of do they sense continuing despair? Regardless, it is the gospel that reverses all sense of logic and brings purity and healing to that which has no hope in itself. Rock Kills Kid has captured the attention of young people and closet isolationists all over and on this fertile ground we should consider their voice.

From their top 15 US chart track 1 “Paralyzed”, which is tattooed all over MTVU, and embodies the impetus of motivated reflection that set off this musical tremor of influence. Their memorable “ Don’t Want To Stay ” oozes with eighties flair leaving me feeling as though I’ve been cheering Cru Jones over Bart Taylor in the movie Rad (1983) having just taken the Pepsi Challenge and eaten a Whatchamacallit candy bar. “Hideaway”, along with most all enclosed tracks, provides a tumultuousness of toe tapping tarry, especially in “Raise Your Hands”, which is what you’d get if musicians Depeche Mode and Dick Dale got together in their best Hawaiian shirts. Overall, they convey their isolation with audacity and welcome honesty. Yet, it is here that the gospel steps up and where humanism hits a brick wall.

I know I’ve had my share of isolated moments. You? The Psalms come to mind and the vast reflections and honest introspections that generate meaningful perspective. I recall Psalm 73. It isn’t until after a long hard look at the world and some honest questioning that there is a conclusive sense of understanding: “…I envied the arrogant when I saw the prosperity of the wicked. They have no struggles, they are free from the burdens common to man. When I tried to understand all this, it was oppressive to me till I entered the sanctuary of God; then I understood their final destiny.” (v. 3-5, 16-17) It is here that music has such common grace and power. In a way these postmodern psalms of inquisitive wonder as to who we are and why we endure such suffering and isolation are true and genuine opportunities for us and the gospel to soothe. The question is, will we and how so?

1. [From “Paralyzed”]
Trapped underneath my own routines; I tried to lift it off of me;
I give up;
I just sit and bleed;
I'm paralyzed;
Stuck in the middle and I'm paralyzed.

Can you resonate with any of these notions? What do they mean? How would you assume most people would understand them?

2. [From “Hideaway”]
Dead inside, you wait for something;
Innocence lost so long ago.
No one cares, so why should you?
Run away cause you're all alone
At what point in our isolation do we utilize others for help?

What does it mean or look like to loose innocence? What does it mean to be dead inside? The Church should seek to consider how Jesus Christ is offered, not as a last resort, but rather as a principal wellspring, agree or not? Why?

3. [From “Midnight”]
No friends, nothing to do.
No start, no end.
Stuck in the middle of all of these games.
Running around in an empty room;
Bumping into the cold brick walls…
Midnight, I lie awake.
No sleep until my dying day.

Do you get the sense of hopelessness or mere circumstantial boredom? What does it mean to be stuck in the middle? Lay out your interpretation of ‘running around in an empty room; bumping into the cold brick walls'? Where does one draw hope from in this estate?

4. [From “Are You Nervous?”]
Everything that you've ever known will go up in flames;
tell me, are you nervous?

How does fear govern our worldview? How much of our perspective is victim to lofty claim but with little genuineness? What is meant by ‘everything…will go up in flames'? Why should or shouldn't this make us nervous?

5. [From “Back To Life”]
I have waited for this day;
to feel I'm fitting in;
and I have longed to feel this way;
to be alive again

What is it like to cope without the gospel? How does such awareness help us approach those in isolation? The gospel doesn't nullify us from isolation or suffering, but what hope does the gospel offer where our humanity cannot?

What is implied or intended by the notion of all god's children being evil? What's meant by ‘life is a real bitch'? How and/or why do we keep moving on? Where do we move on?

7. [From “Run Like Hell”]
Bend my head in cellophane…ease the pain.
Don't sit there, all tied up in your regret, regret.
Live your life, and think for yourself…
Be the things you wanna be.
All around, things are moving and lying's such a waste.
Turn around, face the world and you will find your place;
and you will, run like hell.

What does one need to live life and think for yourself? What does it mean to face the world? Why would we ‘run like hell'? What would a contrary position/argument be?

8. [From “Don't Want To Stay”]
…relax and try to close my eyes.
Think how I'm gonna make it through with my disguise.
Somehow, somewhere somebody's catching on.
By the time they figure it out, I will be gone…
So, where's the place I'm looking for?
I'm looking for anything new.
I just want more.

What is it that we want more of? From whom do we want it? How can we offer more in a culture so ‘PC' with pluralism and tolerant absorbed sensitivity? How can your own personal experiences render empathy and convey the gospel? How will we make it through? Where does real hope come from?

What worldview of suffering does our culture embrace? How does the gospel steer our understanding of suffering? Does it? If not, why not? How might the notions of testing be understood here?