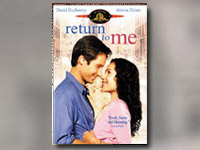 Bob is a recently widowed architect. Grace is a young waitress in her grandparents Irish/Italian restaurant. They meet while Bob is on a blind date with someone we’ll just call Ms. Wrong. What Bob doesn’t know is the secret beating inside Grace’s chest. This film works. It brings generations together and it works. It brings themes of life, love, death and humor all together and it works. This film is subtle with some things and over the top with others—and real in an eerie way when you are in the home of Grace’s best friends Megan and Joe. The lessons are subtle but there.

Quotes and Moments
Bob: Elizabeth and I started dating when she was fifteen. So, this might sound juvenile, but can I hold your hand?

Bob: You smell good.
Grace: It’s the flowers. Not this particular flower cause it’s a tomato plant.

Bob: I would like to dedicate this next shot to Grace, who brought me back to the game after a five year absence… That’s right. Before that I was your beer runner and milkman. The last time I bowled was Andy Jankoski’s 13th birthday party. So Grace, this shot’s for you. (He rolls a gutter ball)

Megan: I’m just saying, for safety, don’t shave your legs, because then you definitely won’t let it go too far.
Grace: Megan, it’s a first date.
Megan: I married a first date. I’m sure you plan on being levelheaded, but once you’re in the moment, the male brain seems, I don’t know, everything they say suddenly seems brilliant. Hairy legs are your only link to reality.

1. Return to Me could have been your run-of-the-mill romantic comedy, but as film reviewer Mark Freeman said, “It is interesting what Hunt chooses to show us, and it is often in the details she includes and the major ones she omits which keep Return to Me walking the line between success and failure.” 2. What was you first reaction to this film? Why do you think you responded the way you did? 3. What symbols and themes appear in this film? When do they occur? Which themes and symbols run throughout the entire film? What do they represent? (i.e. gardens, the human heart, etc.) 4. Do you think the makers of this film were successful in taking you where they wanted to take you? Why or why not? Where do you think they wanted to take you? Were there any particular scenes that stood out to you most? 4. As a comedy, do you think this film dealt with issues of mortality and death in a healthy way? Explain? 5. James Berardinelli said, “Movies do not have to be art to be entertaining. Nowhere is this more evident than in an enchanting piece of fluff like Return to Me.” As a romantic film, do you think this film has substance, or is it just fluff? Explain. Would you consider this film to be “art?” Explain. 6. Critic Betsy Bozdech noted, “[Joe and Megan’s] banter, and the scenes inside their house, with kids crawling out of the woodwork, have the unmistakable feel of real life.” Whether it’s Joe and Megan or the warm and funny exchanges fueled by the charm of the late Carroll O’Connor, the characters in this film seem to have routines and depth of life that we relate to. 7. Describe each of the characters. What were their best and/or worst qualities? 8. Is there any one character you identify with more than the others? Who and why? Who do you think you were meant to identify with? 9. What was your reaction to the interaction between different generations, like in the bowling scene? Do you tend to interact with people of a variety of generations, or do you tend to spend most of your time with people in the same life stage as you? Why do you think this is so? How do the characters in this film depend upon each other? 10. What About You? James Berardinelli said, “Return to Me uses a transplanted heart as a means to ponder fate.” The questions that follow are meant to invite you to ponder as well... 11. This film omits the obligatory sexual encounters you find in so many Hollywood pictures. How would a sexual relationship between Bob and Grace have impacted the telling of this story? Explain. 12. What do you think is the main idea of this film? Do you agree with the critic quoted above? Explain. 13. Being kind to others in the room, what are some of the difference you see between generations? 14. In the film, Grandpa Marty tells Grace, “I am blessed with work.” How do different generations regard work (in general)? How is work regarded by each of the characters in this film? What drives them in their work? How do you feel about work? 15. If you were in Grace’s shoes, would you have found it hard to tell Bob your secret? Why or why not? If you were in Bob’s shoes, would you have found it hard to hear Grace’s secret? Why or why not? 16. How might this film be used as a point of contact for discussions with non-believers? 17. How is this film a window of insight into how a Christian should live, think and act?