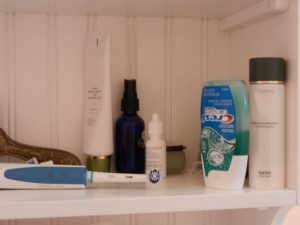 Reclaiming toothpaste
“Dude!! You need to chill!” I don’t ordinarily talk like this, calling someone “Dude.” It’s pretentious for a woman my age. But it seemed appropriate at the time. I had to shout to get Denis’ attention because he was flipping out.

He walked into the bedroom late one night and asked why there was water under the lid of the flip-top toothpaste container. When he opened it a bunch had spilled out. Welll. I remember thinking for a second: Margie, you need to lie here. Because you love him. But I couldn’t think fast enough. I told the truth.

I dropped it in the toilet. Before I could assure him that I had washed it with hot water and soap, he was yelling; and what could I do? I hadn’t thought of opening the lid to drain it. He was acting like he was going to be infected with a flesh eating bacteria or something. I TOLD him there was nothing in the bowl, except water, and all you might get is a little pink-eye, ha-ha. (In case you don’t know – that’s caused by fecal contamination.) He didn’t think that was funny. As he went down the hall, he was still shouting, “WHAT were you thinking?” and et cetera. A while later I got up to do something and saw he’d thrown away the toothpaste AND his toothbrush. So I had to ask, “What were YOU thinking? Like we can afford to throw away a perfectly good container of toothpaste? AND your toothbrush, too? What will all Ransom’s donors think of being so wasteful? And after we told them how hard times were?”

I don’t know whether I should report what he said, but it was: “And EVERY time I FIND that toothpaste back on the shelf I WILL throw it away.”

So touchy! I told him not to touch it any more. The next day I bought him a new container of Crest. (I’ll use up the old one myself.) The problem is that the new one looks exactly like the old one, and in a few weeks (until he reads this) he’ll forget. And with our memory problems, well, you can see where this might lead.

Unhappily, in my life there are other categories of lost and fallen. To me, flying is like entering another dimension; you leave the airport in Minneapolis and arrive at Hogwart’s Castle with body and mind intact. But when we flew to our annual board meeting in January, I lost my socks in that magical dimension. As we settled into our narrow little seats, I got hot. After adjusting the air, removing several layers of clothing, and still feeling frantic, I took off my shoes and socks, leaving them on the floor beside my computer case. When we were about to land and I was re-dressing, I couldn’t find my socks. Although we looked everywhere, they were gone. I decided not to worry because we landed in Phoenix where, what the hey, it’s warm and the socks had holes in them anyway. But, still, I wonder, is it me? The universe? Or what?

Then there is my key ring with front door, back door, storm door and car keys that I cannot find. Unlike my cell phone which can be called from our landline to discover it’s location, I can’t do that with keys. So I retraced a week’s worth of errands begging clerks and cashiers to check the Lost and Found. This happened while Denis was out of town with our car and I was borrowing Anita’s second set of keys to drive her car. I thought mine were just bouncing around in my purse. I’ve thought about praying to find my keys, but Denis showed me a New Yorker cartoon where an angel appears at the window of an overweight, disheveled-looking man, kneeling beside his bed and announces: “Your prayers are freaking God out.” I’m freaking myself out.

Three envies, possibly more
It may be risking more to be honest about who I am, but what do I have to lose? ha. I have more serious problems with breaking the Tenth Commandment: “Thou shalt not covet.” In an excellent book on one Christian’s search for humility, Bruce Ray Smith writes, “I admit to envy, a sin I deprecate in others and to which I had thought myself immune. Envy is a strain, a virulent strain, of pride: I should not be so surprised, so mortified to find myself infected.” Winter Light, Kalos Press, p.17.

So I admit to you that my envies include the following:
A writing retreat house (designed by architect Andrew Berman) posted on the internet caught my attention. It is aesthetically gorgeous with calm colors and tidy shelves. A wide, clean desk faces a wall-sized window overlooking a sunny woods. Right now the ceiling of the office where I write is leaking. I was out running errands when my husband heard a rhythmic plop, plop, plop-plop and investigated. Water was dripping onto my bookshelf, open dictionary, and a stack of papers. The ceiling is now drooping and stained the color of tobacco juice. Then I recalled a writer who wrote everyday from a tiny desk tucked into her small, dark closet that smelled like an old shoe.

I have a window that looks out on a lush linden tree. I have a small tapestry that softens the wall above my desk. The floor is honeyed-colored fir, and my messy L-shaped desk is large enough to host a sweet collection of giraffes. The bathroom is right next door. Bonus!

A nonprofit organization I admire celebrated their 20th anniversary this past year. When I heard that a couple of crack chefs were coming from far away to help cook a feast for the attendees, I blushed. What? Why didn’t Ransom do something like that for their 20th anniversary? Back then, Denis thought of splurging on a roll of foil stickers we could place on envelopes announcing: Celebrating 20 Years! But wait, wasn’t this our own failure of imagination? We had no energy or ambition to do more. Should friends be faulted for doing what they do so well – mentoring and launching gifted musicians and artists? Ransom’s 30th anniversary is coming up next year. So? Margie? Never mind, I get where this is going.

Friends taking a trip to France sent secret waves of envy through my heart. During grape harvest? Fromage fests? Café crème on the plaza? They are precious friends who have hosted us many times and spent countless hours loving us through dark and fainting times. And last November, didn’t I get, not only what what I needed, but what I wanted, after all? A quiet place on a lake without television or neighbors. A fireplace, windows to the sun, books, coffee and a good companion.

I should shut up because I can’t talk myself out of every envy I feel. I don’t want to be this kind of person. I don’t want to be known by these ugly things, but for all the wrong reasons. I’d like you to think I’m a better person than I am. More acceptable. Which is not at all what God has in mind. He wants to remake me. Again, Smith exposes where I’m at: “I want to be cured of the ills with which my pride afflicts me. But even without them, even freed from isolation, contempt and self-contempt, I will be no better. I still won’t know how to live; I won’t know, not here nor in heaven, how to be until I learn who I am, who I am now and who God meant, means, me to be.” Winter Light, p. 22.

Self-centered prayers get a little help
I forgot my Anglican prayer beads on the window sill at the cabin in Wisconsin. They were made by a friend; beautiful – jade and onyx. I sat at the window for morning prayer, looking out on the sky and lake, the chickadees darting to the feeder, snatching sunflower seeds. A great spot for contemplation. In the past, I would have gasped if you had suggested I use prayer beads. I thought they were as pagan as you could get. Repeating mumbled words. Fingering beads. Idolatry. Useless at best. Now, I’m sorry they will need to be replaced.

I’ll tell you why I use them now. Perhaps it’s my age, but I think I could have used their help a long time ago. I’ve always needed help with focus and clarity. My mind strays. No, that’s not true. Without an anchor it sails away with any excuse, on any whimsy. My prayers are far too self-centric. They are focused on my needs, my wants. “Dear God, help me be a better person so people will like me. Heal me. Give me a fun time. Give me safety when I travel. Help my finances, and make my pillows soft. If I had time to spare, I might pray for my husband and anyone close who was having a big problem.

To oppose this propensity to make self the center of the universe, I use the four sections of seven beads to help me pray in other ways for other people, with other needs than my own. So:

Prayers for others – I can’t begin to pray for all the needs of all people around the world, but in a finite way, I can pray for some. I often pray for unmarried friends because I don’t think it’s easy being either single or celibate in the culture of the American church. For people suffering under tyranny, war and famine, I ask God to spare and comfort. I remember God who sees them all, and I, too, am comforted.

Prayers for family – immediate family. There are always things to remember or give thanks for. Despite what we may present to the world, who has a family that isn’t facing difficulty in some way? So sometimes a particular bead represents a particular person.

Prayers for self – seven whole beads for all my causes, confessions and worries.

Prayers of thanksgiving and praise – for bringing his words to us through scripture. For the men and women who wrote them down and were willing to belong to him with all their great and pitiful lives, who were human and flawed, like me. For God being Trinity. I use that language: Thanks be to the Father, Son and Holy Ghost.

The beads begin and end with the cross. And so, my prayers. I want to live, try to live, with this in mind – that God’s plan is to restore all things via the cross. That plan includes me. By it, one day, I’ll be resurrected, and then I’ll never lose my keys or slam a door. Nor will I envy, ever again.

[I ordered a new set from the Solitaries of de Koven. They’re made of African jasper beads; their earthy colors remind me that I, and those I love, are made of dust. Yet our days are numbered by a creator who loves his children and will take us home some day. There are many ways to use the Anglican prayer beads as an assist to prayer and meditation. Nothing sacred about how Margie does it.]