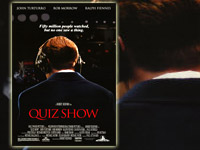 Robert Redford’s movie, Quiz Show, his best in a career marked by superb directorial performances (Ordinary People, A River Runs Through It), probes a number of problems in our culture, and all of them thoughtfully. In fact this film, which has about as much real “action” as Driving Miss Daisy, stimulates the mind on so many fronts that the viewer leaves the theater feeling like he has seen a cultural Speed.

Quiz Show contains the essentially true story (many of the details are conflated in order to make the film, but most of the principals from the actual events agree that the story is true to the spirit of what happened) of a famous scandal of the 1950’s involving Charles Van Doren, a young, good-looking English professor at Columbia University. Van Doren is the son of another Columbia English professor, the famous poet Mark Van Doren, and he becomes a national icon through setting records answering obscure questions of intellectual trivia on the quiz show “Twenty One.” Along the way, he traps himself in a web of deceit by agreeing first to receive the questions, and eventually the answers, before he goes on the show each week. The plot revolves around a government investigation of the show and the uncovering of the scandal.

Quiz Show contains powerful statements about the manipulative drive of television to meet the financial bottom line, about the personal temptations of fame and money to an honorable man, about the insatiable desire of American audiences to need a good-looking, WASPish “winner,” about the conflict between truth and love in an investigator when he suspects a friend of wrongdoing, about the greed and vengeance felt by a scorned lower class, about the propensity of the “instant” medium of television to provide entertainment even at the very moment it is pretending to educate. It is even about the need in a son of a successful man to prove himself at any cost.

But ultimately, Quiz Show is about the fundamental ethical dilemma: “Should I resist the temptation to do wrong, or not?” The movie, unlike most thoughtful modern films, lays out the consequences of wrongdoing in the context of a morally structured universe, a universe that assumes certain actions to be right and others to be wrong. The grayness of Charles Van Doren’s motives (money? fame? promotion of education for the children of America? pleasing his father?) never negates the clarity of the wrongness of his actions. Redford’s direction and the Academy Award level portrayal of Van Doren by the fine young British actor Ralph Fiennes are clearly sympathetic to the character; indeed the film portrays Van Doren as a more morally conflicted, and therefore upright character, than he apparently was in real life. But Quiz Show never backs away from showing that moral actions have moral consequences; every guilty party in the film suffers on account of his involvement.

Except television. If there is a culprit that gets off scott-free, it is the chief manipulator of our age, the small screen. The higher-up television executives all are acquitted, and even the one lower-level executive, whose plan the whole thing was, plays the game of accepting the blame and eventually getting a job back as a result, while Van Doren and the key government witness, a scorned former champion named Herbert Stempel, are ruined for life. So television, the great whoremonger, wins even though it is the most culpable.