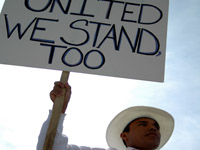 Postville: Undocumented workers, immigration & justice (II)
Six years ago, Raul worked as a dishwasher at a restaurant in Rochester, Minnesota.

He was soft-spoken, slight, and immaculately groomed. He kept his black hair neatly combed back, and he wore a white, short-sleeved, button-down shirt. He never came to work late. He almost never spoke. He had two little girls and a wife in Mexico. He kept pictures of them in his wallet, worn thin from being folded and unfolded again and again.

I know because I worked with him—I was a waitress, a high school student, and the only American employee who spoke even a little Spanish.

About six months after he arrived, the truth emerged: His paperwork was fraudulent. He would have to be let go.

My manager lowered his eyes as he approached Raul one night in the kitchen. I struggled to translate his explanation, but it was beyond my ability.

Papers are bad. You have to leave. I’m sorry.

My manager handed him a white envelope. Raul bowed his head, said goodbye, and left, looking stricken. In the envelope was two weeks’ pay.

We were sorry to see him go. He was the best dishwasher we’d ever had.

He was replaced by an American—the restaurant was taking no chances this time—who was swiftly fired and replaced again. For months I thought of Raul’s family, who were living on the money he sent them. I wondered if they had enough to eat.

I was deeply conflicted. Certainly, Raul was on the wrong side of the law—but although I knew he had come to the country illegally, I couldn’t bring myself to see him as a criminal. There was no venom.

In his book, Christians at the Border, M. Daniel Carroll R. explains that he prefers the term “undocumented” to “illegal.” He writes:

Illegal can carry a pejorative connotation, suggesting by definition that the person is guilty of some act, has few scruples, and is prone to civil disobedience. This is not the case with the overwhelming majority of Hispanic immigrants. Most would gladly regularize their status with the government, but the present system simply does not provide appropriate avenues to do so. What these people lack is the proper documentation required by Washington and the workplace. They are not criminals. At the same time, the label alien can evoke the sense of someone unchangeably foreign and other, without hope of reconciliation or mediation. Illegal aliens, therefore, is unhelpfully prejudicial. Undocumented immigrants is a more just label and better represents the present reality.

I am inclined to agree. I spent seven years in high school and college working in the restaurant industry, and in that time I came to know dozens of Hispanic immigrants—some who were in the States legally, and others who were not—who lived heartbreaking realities. I consider none of them criminals.

A busboy at one high-end restaurant was supporting both his parents and his elderly grandparents in his poverty-stricken Guatemalan hometown. I once gave a female cook a ride home and glimpsed her tiny house—little more than a two-room shanty in a vast housing project I had never seen before, on the edge of town.

I was shocked. Row after row of tiny, shabby houses. All rented by Hispanic immigrants, mostly men, who worked to send money to their desperately poor families. On one doorstep was a woman with a baby. I remember thinking that anyone who would willingly live in hovels like these would have to be fleeing something worse.

What saddens me most about the immigration debate in this country is the lack of compassion evident in many discussions. Christians and non-Christians alike often cavalierly dismiss undocumented immigrants in black-and-white terms as “criminals,” “aliens,” even “pigs,” (surprisingly, I’ve heard this a lot) without taking their humanity into account.

Certainly, porous borders are a serious problem, a problem about which we should all be concerned. In a post-9/11 world, we are faced with terrifying realities that seemed unimaginable before.

But it is my position that much of the anger in this debate is misdirected at the immigrants—the vast, overwhelming majority of who are good, hardworking human beings. For most, their sole intention is only to provide for their families, who are often living in violent, corrupt, and poverty-stricken environments. This anger would be better directed at employers who are taking gross advantage of the desperation of such immigrants, and government officials who have not allowed immigration law to evolve to meet the reality of our present situation.

I find the Postville raid [see “Postville (I)” in Critique #3-2010 and on Ransom’s web site] especially troubling for a number of reasons. Reports of abuse, of dirty and dangerous conditions accumulated for years. It was a situation that cried out for justice. But when the government intervened, it was to arrest the workers, hundreds of them at a time, in what became only one of many similar raids. They were charged with inflated crimes that they simply did not have the knowledge to commit according to the wording of the statutes; their alleged identity theft was hardly committed “knowingly,” or with the “intent to commit an unlawful activity or felony.” Most of them were provided the false identities by their employer. Many who weren’t simply invented a Social Security number. Authorities took advantage of their desperation to return home and provide for their families by forcing them to take a plea deal that put them at a distinct disadvantage.

Some have suggested that the recent surge in raids is simply a way to boost the “numbers” of Immigration and Customs Enforcement, a new agency in the Department of Homeland Security that must be seen to produce results to keep its funding. Construction sites, factory sweatshops, and food processing plants make for “easy pickings.” Their workers, who are otherwise overwhelmingly law-abiding, are much easier to pick up than criminal fugitives, who must be captured one at a time. Only five of the 389 workers originally arrested at Postville had any kind of prior criminal record.

And yet I would argue that this is only peripherally relevant to our duty as Christians.

We are called to see the fundamental humanity in all people, who are created in the image of God. Immigrants, too—documented or undocumented—have essential value and divine worth. The Old Testament is full of stories of exodus and migration—God’s people were often strangers in foreign lands, and unwelcome strangers at that. My namesake, Ruth, was forced to assimilate to a new culture and a new people in her loyalty to Naomi. Joseph, Daniel, and David were all immigrants at one point in their lives. Even Jesus had to flee King Herod as a child.

Many Christians (and non-Christians) argue that the word “illegal” before the word “immigrant” tells us all we need to know. They are, by definition, criminals. Christians often rely on a strict reading of Romans 13 to bolster this argument, which exhorts Christians to submit themselves to the governing authorities. But to take this verse without context or nuance is to make the troubling assumption that all laws are equally and inherently good and just. This is a very narrow understanding of a Christian’s relationship to government, and I believe it is deeply flawed. I find this view especially confusing in light of the fact that many people who quote this verse in abject dismissal of undocumented immigrants are also profoundly pro-life, living in a country that has legalized and condoned abortion on a grand scale.

The immigration system in the United States is outdated, confused, unfair, and badly in need of reform. The sweeping immigration reforms that have long been promised would be a good start, but these have yet to materialize. I am not suggesting that laws are irrelevant—far from it. I simply believe that it is not the duty of believers to applaud at face value every law, decision, or action of the government. Rather, it is our duty to love our neighbors, to feed the hungry and clothe the poor, to care for the sick. To have compassion for those who suffer.

Rather than succumbing to the easier choice—blind judgment and dismissal of the “other” in our midst—I think a better perspective has already been modeled for us.

Jesus’ encounters with Samaritans the hated “other” to the Jews of his day, exemplifies Christian love. The woman at the well, the leper—both of whom, as M. Daniel Carroll R. points out, were doubly outcasts—were simply his “neighbors,” as his parable about the Samaritan and the injured man in the road further illustrated.

The vast majority of undocumented immigrants are not pigs or criminals or aliens—they are human beings who live and struggle and yearn. They are dying in the desert to get here. They are our neighbors. Nothing less.
Copyright © 2010 Ruth DeFoster

1. Review the facts of the Postville raid—for the story see “Postville (I)” by Ruth DeFoster in Critique #3-2010 and on Ransom’s web site. Did you hear about the raid in the media at the time? Have you heard of similar events? Is the media coverage adequate given the nature of these events?

2. In the past, what has tended to be your position on immigration and the issue of “illegal aliens”? Why have you held this position?

3. DeFoster argues that we should use the term “undocumented immigrants” instead of “illegal aliens.” Do you agree? Why or why not?

4. To the extent of your knowledge of the events in Postville, was the raid and legal disposition of the case a just act by the United States government? Why or why not?

5. DeFoster argues that simply applying the instructions found in Romans 13 concerning obedience to the law is an inadequate Christian response. Do you agree? Why or why not?

6. Do you personally know anyone who is or was an undocumented immigrant, or whose family at one time held that status? How does this knowledge, or lack of it, effect your position on this volatile political issue?

7. Reread and discuss the last four paragraphs of DeFoster’s piece. Where do you agree? Why? What would you challenge? Why?

8. As M. Daniel Carroll R. points out in his book, Christians at the Border, the issue of foreigners and aliens is found throughout the Scriptures and their treatment and status is specifically addressed in the Old Testament law. To what extent is your political position shaped by a careful study of these numerous biblical texts? If you were challenged to defend your position in light of these texts, could you do so? What plans should you make?