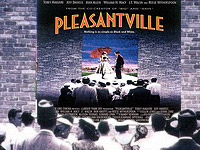 On first viewing, something makes one want to cheer Pleasantville, the comedy written and directed by Gary Ross (writer of Big and Dave, and here in his directorial debut). After all, by the end of the movie tyranny is vanquished, oppressed minorities are freed, women are empowered, art and knowledge are extolled. The movie undoubtedly handles big questions and is carried by a story line that centers on ideas of worldview, truth and justice. What more could a movie-going Christian want? Plenty, believe me.

Pleasantville has an intriguing enough premise. Dave and Jennifer, a teenage brother and sister of the California nineties, are thrown back in time into the middle of a fifties black-and-white sitcom by a mysterious television repairman who gives them a remote control “with lots of oomph.” There, as Bud and Mary Sue, characters in the sitcom, they discover that the inhabitants of Pleasantville lead dreary, boring—dare we say it?—ordinary lives. Not only do they not drink or smoke or have sex, they don’t have fires (the firemen only rescue cats from trees), the high school basketball players never miss a shot, and the men of the town bowl a lot while the women all play bridge. These two teenagers, after an initial, brief concern that they might wreck Pleasantville’s universe, take it upon themselves to bring color into the lives of the town’s inhabitants by teaching them about “real life.” And that’s where the fun begins.

Colors pop up all over the place. Flowers and trees, yes, but also cars, books, soda shop windows and, most of all, skin, all are transformed as people discover sex, reading, art, music, freedom, rain. (Yes, rain. The television weather report in Pleasantville has always been “High, 72. Low, 72. Sunny and warm all day.”) But with these changes comes reaction. Black-and-white town officials don’t like the changes and seek to impose laws regulating the “coloreds,” repressing art and free expression in the process. What will happen? Tune in to Pleasantville to find out.

The possibilities for humor and thought provocation, given the basic idea, are endless, and Pleasantville gets high marks for achieving a lot of both. The casting is flawless and the performances superb from Tobey Maguire as Dave/Bud and Reese Witherspoon as Jennifer/Mary Sue to J. T. Walsh (in his last role) as the town mayor. William H. Macy and Joan Allen as George and Betty Parker, Dave and Jennifer’s Mom and Dad in Pleasantville, bring both a believability and a comic poignancy to their characters that in lesser hands would have made them just appear silly. Jeff Daniels as the kind but spacey artist is remarkable, and all the lesser known actors are equally good.

The special effects, too, are extraordinary. Shot entirely in technicolor and repainted for the black-and-white scenes, the film has a look that never seems wrong or contrived, and the viewer is able to concentrate on the story as a result. Only the first fire in Pleasantville looks fake, especially since the tree, burning bush style, doesn’t really burn.

But all is not right in Pleasantville. In fact, not very much is right when it comes to the philosophical outlook of the film. The movie reeks of the worst sort of preachy “cleverness” in its attempt at satirizing everything in 1950’s America from big breakfasts to stable home life. Particularly galling to the Christian is the content-reversal of biblical truth shown in Pleasantville. From the annoying, impotent “God” figure, portrayed by Don Knotts, to David’s “fall” when he eats an apple given him by his girlfriend, the audience is subjected to sophomoric and heavy-handed symbolism on all sides, pushing a politically correct message of free sex, anarchy, cubism, adultery, and “choice.” Dave’s “fall” actually brings him, and all those in Pleasantville who “fall” with him, freedom and joy rather than the slavery and misery we know the Biblical fall really brought. The film says nothing about religion per se, leaving out priests and churches, just as the fifties sitcoms did, but, oh does it preach “values.”

At the top of the list of life-giving antidotes to the grayness of life in Pleasantville is sex. In one long tracking shot moving down a line of convertibles up at Lover’s Lake, we see socks, shoes, feet and legs in all sorts of positions that emphasize the fun of a back seat romp—did people really do that with the top down in front of everyone?!—but the movie is not about to stop there. Adultery and masturbation rise up as sources of life affirming self actualization, Betty Parker’s orgasm in her hot bath causing the tree of passion in their front yard to burst with the flame of desire, Like Water for Chocolate style. And when Betty sleeps with her “true” love, adultery is baptized, while love expressed through duty is simply cast aside as worthless. In fact it is the film’s view of sex that is perhaps its most hypocritical stance. Satirizing the fifties sitcom as “unrealistic,” it portrays promiscuous sex as miraculously free of danger without mentioning AIDS or venereal disease, and adultery as a simple choice based on simple love without much hint of the complex pain it almost always causes. Who’s being unrealistic in this case?

The film is pathetically “ageist,” too. In good sixties fashion, the enlightened teenager shows the foolish and myopic adult not only what to think but also how to live. From Bud introducing Mr. Johnson to art to Mary Sue instructing Mom on how she can enjoy sex “without Dad,” youth is the great teacher and the older you are, the more foolish and reactionary you are. Even good old God—doesn’t everyone know that the Lord of the Universe is really a television repairman who looks and sounds like Don Knotts?—of course approves: He sent the teenagers there.

An anarchic view of law prevails in the film, too. There is a scene in the soda shop where the “coloreds” read the laws that are handed down by the town council. The scene draws a mixed response since the laws that were handed down were in fact fascist and repressive so they should not have been obeyed. But, far from showing that the laws should not be obeyed because they break a higher, more truthful standard, the reason given for breaking them seems to be simply, “I DON’T WANT TO.” Bartleby the scrivener couldn’t have said it better. Anarchic postmodernism to a T.

The postmodern “create-your-own-reality” theme is very much in evidence. How tiresome it is to have film makers, following literally millions of “reality rules” in order to make their movies, tell us that we create our own rules and that nothing can impose itself on us from without. OK, Gary Ross, make your Pleasantville without electricity then. Let’s see you do it.

There are several positive values in the film, but even these are tainted. Knowledge gained through reading books is regularly portrayed as a good thing. But which books inspire the now sexually aroused young people in Pleasantville, and in particular the oversexed Jennifer/Mary Sue? Why, Catcher in the Rye and Lady Chatterly’s Lover of course.

And it is true that painting, with its mysterious use of color, texture and shape, is a wonderful inspiration to life. But when Bud brings an art history book to the soda shop to introduce Mr. Johnson to this great discipline, hundreds of years, shot through with wonderful Christian inspiration, are jumped over instantly in order to sing the praises of the impressionists, the post-impressionists and the cubists. After a flicker of the casting of Adam and Eve out of the garden (obviously put in to carry that theme through), we jump straight to one of Rembrandt’s least Christian paintings (a selfportrait. Get it?). Next comes H. M. W. Turner, the naked “Maja” by Titian, Monet, Gauguin, and Renoir with the music reaching its crescendo at “Starry Night” by Vincent Van Gogh, that paragon of virtue who ought to be everybody’s role model. Mr. Johnson ends up a cubist.

Pleasantville takes step after step in the wrong direction, championing falsehoods and immoralities of all kinds. But did I like the movie? You bet. Brilliantly conceived, acted, written and directed, it dared to attack big subjects that really matter. How sad that the answers it gives are so wrong.

1. What was your initial or immediate reaction to the film? Why do you think you reacted that way? What was it in the film that prompted that reaction? 2. What is the message(s) of the film, or view of life and the world that is presented in the story as it unfolds? Consider how the film addresses themes such as: the nature of reality or what is really real; what’s wrong with the world and what’s the solution; the fragmentation of life in our busy, pluralistic world; the significance and meaning of relationships and love; the significance and meaning of being human; whether there is right and wrong, and how we determine it; the meaning of life and history; and what happens at death. 3 What is attractive here? To whom? How is it made attractive? 4. Where do you agree? Where do you disagree? Why? In the areas in which we might disagree, how can we talk about and demonstrate the truth in a winsome and creative way in our pluralistic culture? 5. In what ways were the techniques of film-making (casting, direction, script, music, sets, action, cinematography, lighting, editing, etc.) used to get the film’s message(s) across, or to make the message plausible or compelling? In what ways were in ineffective or misused? 6. Most stories actually are improvisations on a few basic motifs or story-lines common to literature. What other films come to mind as you reflect on this movie? What novels or short stories? What Scriptures? 7. With whom did you identify in the film? Why? With whom were we meant to identify? Discuss each main character in the film and their significance to the story. What insight does the film give into the way postmodern people see life, meaning, and reality? How can you use the film as a useful window of insight for us to better understand our friends and neighbors who do not share our deepest convictions and values?