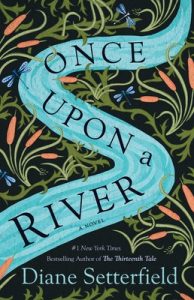 Seeing into other worlds — in a novel

Friends recommended Once Upon a River to us over dinner, saying it was one of their favorite novels. They promised that if we read it the four of us would want—no, would need—to meet again to talk about it, probably over dinner. Well, Margie and I have both read it, and next month we’ll be at Nina and Andrew’s art-filled home near Lake Minnetonka to share a meal and talk about this lovely story. Trouble is, I doubt one evening will be sufficient—far too much to discuss. One full evening could be spent just reading sections aloud for the pure delight of it. I suspect more unhurried conversations over meals are in our future.

Diane Setterfield begins her novel with an epigram on the page immediately preceding the beginning of her story. It can’t be missed, and jolts the reader’s imagination that something is going to happen. “Along the borders of this world lie others,” she writes. “There are places you can cross. This is one such place.” A good start, I think.

Once Upon a River is set along the river Thames, in the houses that have been built along the shore and even more in the pubs where people gather.

There was once an inn that sat peacefully on the bank of the Thames at Radcot, a day’s walk from the source. There were a great many inns along the upper reaches of the Thames at the time of this story and you could get drunk in all of them, but beyond the usual ale and cider each one had some particular pleasure to offer. The Red Lion at Kelmscott was musical: bargemen played their fiddles in the evening and cheesemakers sang plaintively of lost love. Inglesham had the Green Dragon, a tobacco-scented haven of contemplation. If you were a gambling man, the Stag at Eaton Hastings was the place for you, and if you preferred brawling, there was nowhere better than the Plough just outside Buscot. The Swan at Racicot had its own specialty. It was where you went for storytelling.
The Swan was a very ancient inn, perhaps the most ancient of them all. It had been constructed in three parts: one was old, one was very old, and one was older still. These different elements had been harmonized by the thatch that roofed them, the lichen that grew on the old stones, and the ivy that scrambled up the walls. In summertime day-trippers came out from the towns on the new railway, to hire a punt or a skiff at the Swan and spend an afternoon on the river with a bottle of ale and a picnic, but in winter the drinkers were all locals, and they congregated in the winter room. It was a plain room in the oldest part of the inn, with a single window pierced through the thick stone wall. In daylight this window showed you Radcot Bridge and the river flowing through its three serene arches. By night (and this story begins at night) the bridge was drowned black and it was only when your ears noticed the low and borderless sound of great quantities of moving water that you could make out the stretch of liquid blackness that flowed outside the window, shifting and undulating, darkly illuminated by some energy of its own making. [p. 3-4]

The river is not merely part of the landscape in the book, a background feature that sets the atmosphere but remains out of focus. It is virtually a character, shaping lives and deaths, the river sometimes delightful, always present and always dangerous.

We meet Rita, a nurse who cares for the people living along the river, delivering babies, mending cuts, setting broken bones, diagnosing illness, and dispensing both medicine and wise advice. We meet Lily White, a deeply troubled, fearful and abused woman caring for a herd of swine and living in the damp moldy abandoned Basketman’s Cottage at the very edge of the water. There is Robert and Bess Armstrong, grieving for their wayward son, Robin. There is the parson, always in his study, ineffective to do much beyond giving Lily a job and helping her save some of her meager pay. And along with others there are the Vaughans, who like Lily and the Armstrongs have each lost a little girl to the river and have never gotten over the loss.

Then one cold, winter night a wounded, wet man stumbles into the Swan carrying the body of a drowned little girl. She appears to be the identical age of the lost children, and hope is ignited when the drowned girl miraculously comes back to life. The man carrying her collapses into unconsciousness, but recovers. He is a photographer named Henry Daunt, whose studio is aboard a boat named the Collodion. Multiple claims are made on the little girl, multiple stories are told of how all this came to be, and multiple theories are put forward to make sense of it all.

Setterfield is a master storyteller, and crafts prose of subtle beauty. Margie refers to her as a writer’s writer, meaning she writes with such creativity and brute beauty that writers will read her simply to figure out how she manages it. Once Upon a River is a gripping tale, with well-developed characters in a setting that comes alive with Setterfield’s vivid descriptions. This is fiction worth reading for the excellence of its prose alone, although it was the story that initially drew me in so that I couldn’t put the book down.

And to increase the reader’s delight, there is a deeper level at work as the story unfolds. In an online BookPage interview of Setterfield titled, “Mysterious Matters of Life and Death,” Alice Cary explains:

One of the novel’s central premises is “the different ways human beings create stories to explain something miraculous or impossible or unlikely.” As a result, setting the book in the latter part of the 19th century made immediate sense, Setterfield says, because “science had just gotten started explaining human beings to themselves,” and she could contrast these scientific theories with prevailing notions of superstition, folklore and gossip.

Setterfield is able to allow her story freedom to unfold imaginatively while steadily sorting out the conflicting claims of storytellers with conflicting perspectives shaped by an assortment of legends, myths, religious notions and bigotry.

I loved Once Upon a River. And yet, as I read, I grew troubled. Lily’s story in particular broke my heart, a life of abuse at the hands of a cruel and heartless man. It is not the cruelty that troubled me. My difficulty came as I sensed that this story was not able to be concerned for justice, and so none would be forthcoming—for Lily or anyone else. In the end the horizons of this imaginary world are not expansive enough to hope that someday, somehow, justice would prevail. Life is simply what happens, and the other worlds of the epigram into which we can cross are merely figments of the imagination. The river becomes a metaphor for reality: it just keeps flowing, impersonal, unmoved, unseeing, uncaring and impervious to the things that matter most.

Once Upon a River is set in 1887, the opening years of the modern scientific revolution. Late in the story Darwinian thought, in poorly understood bits and pieces weaves it’s way into the conversations in the Swan. Parts are ridiculed, yet the desire for scientific truth is given compelling voice by Rita and Daunt, who represent medicine and technology. They seek facts and want rational explanations of events.

By the end even the coming back to life of the little drowned girl is revealed to be not a miracle—can anyone really believe in miracles anymore? It is merely the result of lowered body temperature in the cold water of the river, and then being warmed up under Rita’s care in the Swan.

As a Christian I find Once Upon a River a delectable read, an enthralling story, and a wonderful effort to craft imaginative fiction in a world without windows. I also find it deeply sad, utterly devoid of hope that an even greater story exists that is beyond all our imagining. A greater story of meaning and justice that promises that even Lily’s suffering can someday be redeemed.

I warmly recommend Once Upon a River. Read to enjoy it. And read it as an exercise in discernment.