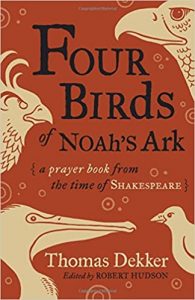 This collection of prayers from the early seventeenth century, edited by the poet Robert Hudson, travelled with me to Vietnam. For a second time, I went hunting ghosts in places linked to a war a half century finished but still alive in so many minds. Separated by more than 300 years, an Englishman’s religious petitions and a warrior’s experiences in a Southeast Asian battle zone would seem to have nothing in common. But they have humanity in common. So, at breakfast in hotels where mostly French and Australian tourists chat; in a park in central Saigon; at a sidewalk restaurant in the city of Huế; after a day of touring in the sweltering Mekong Delta; after gathering relics on the battlefield of Con Thien—prayers from the days of Shakespeare and thoughts of a more recent story mixed and conversed.

There is a “Thanksgiving after a Woman Delivers her Child.” It praises God for giving the mother “double life”—the preservation of her own and the new one in her arms. And the reviewer’s mind turned to a combatant who saw comrades die in Huế, and who says that not only was his own life spared on the first day of the Tet Offensive, but he was allowed to have a life post-war. He gives thanks for the preservation of his own double life and yet mourns those, like the medic lying on the sidewalk a few feet away, who did not survive and thus lost two lives: the one in the moment and the one that could have been.

There is a “Prayer for a Farmer” which observes that, like the plants in a garden, the farmer is also made of the physical stuff of the world; and “so that in trimming the earth, I do but dress myself.” And veterans speak of the ways the war of bullets and bombs and traps reflected the hostility also rife in the natural world of their war zone—fire ants, pythons, thorns, and cobras. It also dwelt in the minds of tightly wound young men who would play and speak violently even when out of danger. It’s good to pray that the wild garden of the mind would be trimmed as well as an earthly one, for both can host scorpions.

There is a “Prayer for a Soldier Going into Battle,” which conveys the ancient confusion between political and divine interests. “Be my captain…this day,” the petition reads. May “the weapons that I fight with [be] faith and hope; and the cause for which I fight, the advancement of true religion.” But English soldiers in the day of Shakespeare must have known that Frenchmen prayed the same thing, and it is hard to believe that this did not make some of them cynical. What, soldiers in Shakespeare’s own Henry V asked, was the war really about?

And I hear Vietnam veterans say that their war was about stopping the spread of communism, but who also know that most of the enemies they captured and interrogated never knew or cared about communism. Or their war was about the preservation of American prestige as a leading Cold War power, but the war ended in American humiliation. They know the historical facts and listen again, this time on YouTube, to President Johnson making his case. But still they wonder: what was that war really about?  “[W]hat reason have I to be proud? Am I not dust and ashes?”

There is a “Prayer for One Who Is Sick,” which says: “My sins cry out as witness against my soul, and my soul pleads guilty of treason against your majesty.” And a veteran tells me that, once after a firefight in Cambodia, he searched the body of a dead enemy soldier, and he found a wallet, and in the wallet was a photo of the man with a woman and children. And the veteran said, and says, to himself: we just killed daddy.

Another veteran says, we didn’t take prisoners, meaning captives were killed. Another wonders if he left behind a child, the product of a union with a poor Vietnamese girl who served for pay. “Restore me, O God, by your pardon,” they might say, “under that great seal of your promise, to forgive sinners at whatever time they heartily pour out their tears of repentance.”

There is a “Prayer for Those Who Work in Dangerous Places, as Coal Pits, Mines, Etc.”

Save my body, O Lord, because, at every turn, Death
is at my elbow. Whatever happens to my body,
save my soul, which is the divine part of me,
so that it may come into your heavenly treasure-house.

Death is at my elbow: ambushes and counter-ambushes; mines; the Vietnamese fighter by night who was the army base barber by day; the smiling local kid who takes the candy bar you distribute in the name of winning hearts and minds and then tells what he knows to the Vietcong; the Agent Orange that still wreaks havoc. And the sense that the divine part of me has been lost. Combat, many veterans say, is a God-free zone, the very definition of hell.

Divided into four parts—the Dove, the Eagle, the Pelican and the Phoenix—the collection of prayers in Four Birds of Noah’s Ark makes for an interesting period piece but also as a still useful source for reflection. A fifth part comprises Feathers, i.e. short quotations from Augustine, Jerome, Chrysostom and others. One reads:

The heart has four duties to fulfill:
What to love, what to fear,
What to rejoice in, and for what to be sad.
—Bernard

It would be compelling to listen to a thoughtful combat veteran reflecting on which is which.

Preston Jones teaches at John Brown University. He provides content for the website War and Life: Discussions with Veterans (https://warandlifediscussions.weebly.com)

An excerpt from “A Prayer Against Wrath” in Four Birds of Noah’s Ark (p. 108):
Wrath is a short madness;
madness is the murderer of reason,
so that anger transforms us into brute beasts.
Give us courage, therefore, O Lord, to fight against
this strong enemy, and not only to fight,
but to overcome him—for it is harder to triumph
over our raging affections than to subdue a city.
All vengeance is yours, O God, and if we offer
to take it out of your hand, it is high treason;
for we do as much as if we set about to pull
you from your throne…