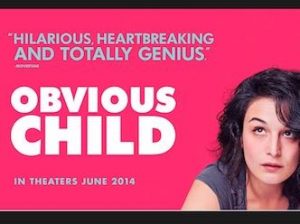 Who’s Obviously a Child?
“Good Morning!” said Bilbo, and he meant it.
“What do you mean?” Gandalf said. “Do you wish me a good morning, or mean that it is a good morning whether I want it or not; or that you feel good this morning; or that it is a morning to be good in?”
“All of them at once,” said Bilbo.
[From J. R. R. Tolkien’s The Hobbit]

When I was a student—back in the Dark Ages—“What does it mean?” was thought to be a good question to ask of a book or a story or a film. The correct answer lay in the intent of the writer or director; what he or she meant by it was what it was all about. It’s an old-fashioned idea that has since been replaced by the belief that there simply isn’t one true meaning in any story, just lots of ever-changing meanings in the hearts and minds of writers, readers, and viewers.

Now I’m not old-fashioned, but I must admit that I am curious about what inspires writers and directors to create and how this shapes their creations. Gillian Robespierre’s Obvious Child hasn’t exactly shaken my faith in the intent of the writer, but it has opened my eyes to the many ways in which a film can be seen.

In an interview this summer Robespierre stated quite clearly what she intended for her film: it’s a romantic comedy about “a safe, regrets-free, shame-free abortion.” To that end she introduces us to Donna Stern (Jenny Slate), a young New Yorker, who works in a quirky bookstore—Unoppressive Non-Imperialist Bargain Books—during the day and does standup comedy in a club at night. One evening, after she delivers a colorful monologue about sex, dirty underpants, farts and parts of her boyfriend’s anatomy, he dumps her, announcing that he’s tired of being the butt of her jokes and that he’s been sleeping with a friend of hers for a couple of weeks anyway. So Donna gets drunk, hooks up with a stranger—Max, played by Jake Lacy—and shortly thereafter learns that she’s pregnant.

The rest of Obvious Child revolves around The Big Question. Not “Will I have an abortion?” The answer to that question is taken for granted. Robespierre quite deliberately has Donna avoid any Junoesque agonizing about whether or not she should have her baby. No, the question she and her friends struggle with is, “Do I tell Max that I’m pregnant?” Obvious Child is meant to be a romantic comedy, and true to form the tension that drives it is whether or not Donna and Max can overcome their differences—she’s Jewish, he’s “so Christian;” he’s a business major, she couldn’t care less about spreadsheets and profit margins; she’s frightfully childish, he looks like stability incarnate—and find a path ahead together.

Why this title? Who’s obviously a child? Donna certainly qualifies. She’s smart and funny, but not so funny as she thinks. Her business-professor Mom’s critique—“And now you waste that 780 verbal telling jokes about having diarrhea in your pants”—fits her like a glove. She’s funny, but also self-centered, flippant, seemingly incapable of running her own life, much less caring for a baby. Marian Wright Edelmans’ comment about “the crisis of children having children” captures Obvious Child’s dilemma perfectly. Donna isn’t ready to be a mother, despite the fact that she is one.

And despite answering The Big Question with a “Yes!” she finds herself unable to tell Max until the night before the abortion. He comes to her club and hears in her monologue that she is pregnant with his child and will be having an abortion the next day. The audience in the club and the audience in the theater in which I saw Obvious Child, responded to this as if it were the comedic high point of the movie. Lots of laughs, lots of close ups of people in the club audience laughing. I wept, and Max left, only to return the next morning, bearing flowers, to go to the clinic with Donna and take her home after the procedure. The film ends with them cuddling on her couch with cups of tea, watching Gone With the Wind.

This is Gillian Robespierre’s story just as she intended it to be. But there’s another story behind her story and perhaps despite her intentions, it shines through in her film, too. Donna’s abortion is never spoken of, either by her, her friends, or her mother, without evoking tears and, once, anger. The images from the film that linger in my mind aren’t laughing faces, but Donna in the bath on the morning of her abortion, washing her face over and over; a close up of her face with tears streaming from her eyes just as the abortion begins; Donna sitting silently in the recovery room afterwards, surrounded by lots of pretty, young women like herself, avoiding eye contact with all but one; her dark humor at the club the night before, when a friend tells her just before she goes on stage, “You’re gonna kill it out there tonight,” and she replies, “No. I’ll do that tomorrow.”

Am I suggesting that Ms. Robespierre made a film other than the one she intended? No, not at all, but I am saying that there are truths that cannot be fully obscured by any author’s intentions. You can see them in her film just as you can see them in Paul Simon’s song of the same title from his album The Rhythm of the Saints (1990).

1. How did you feel after watching Obvious Child? 2. What were you thinking about as the film ended? 3. What adjectives would you use to describe OC? Please, just use single words without explanation, if at all possible. 4. We meet Donna Stern in the midst of OC’s first monologue. Describe your reactions to that monologue. How did it shape the way you look at Donna? Why do you think Gillian Robespierre introduces her to us in this way? 5. In your opinion is Donna an attractive character? What do you like about her? 6. In your opinion is Donna a sympathetic character? What stirs your sympathy for her? If you don’t feel sympathy for Donna, what do you feel for her? 7. As Donna and Max engage in drunken foreplay, Paul Simon’s “Obvious Child” plays in the background. Why do you think this song was chosen for this moment in the film? 8. Donna discusses her pregnancy, her abortion, and Max with various friends and with her mother. What themes tie those conversations together? 9. In the post-abortion recovery room scene none of the women with Donna are women of color. In your opinion, is this a coincidence or did Ms. Robespierre do this for a reason? 10. At the end of OC Donna and Max seem to have made peace with each other. Do they live happily ever after? Defend your answer. 11. In your experience is it possible to discuss abortion—not the political conflict, but the everyday reality of it—without tears? 12. If you were privileged enough to watch Obvious Child with Gillian Robespierre what questions would you have for her afterwards?