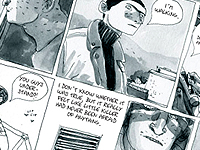 They are usually shelved in the teen section at your local library, or near the comic books at your local book store; but these are not your usual tales of masked crusaders. These are real stories sharing all too real experiences in text and pictures.

PENNING A PULITZER WINNER
As a graphic artist Art Spiegelman turned to the pen to process the stories of his parent’s experiences in Nazi concentration camps. The artist uses cats and mice metaphorically to represent Nazi’s and Jews respectively.

But the furry faces quickly fade as the reader seeks to relate to the all too human and all too tragic tales that unfold. This tale, which was originally released as a serial in Raw Magazine, earned Spiegelman the Special Prize Pulitzer in 1992.

CONSTANT REVOLUTION
With Persepolis, Marjane Satrapi recounts her life growing up in Iran. Born in 1969, she walks us through major upheavals like the Iranian (a.k.a. Islamic) Revolution, life under the Ayatollah Khomeini, and the impact of religious and political shifts on her family.

Early in life Marjane must discern between what she is taught in school and the ideologies of her parents (who were against the regime). We see her grow more aware of her political and religious surroundings; along with their effects on her friends, neighbors and family members. Satrapi has written a companion volume which covers her studies in Vienna and move back to Iran.

Both graphic novels are encapsulated in the feature length animated film Persepolis (2007).

LIFE IN WARTIME
Notes for a War Story is purposely non-descript in its geography–for this could be any war torn region in the world today. Gipi (Gianni Pacinotti) is quoted as saying, “My intention was to make people think about the possibilities of a war suddenly arriving in their own home.” He succeeds.

Through pen and watercolor he weaves a tale of three young men trying to reframe their lives when all that was familiar has been destroyed.

There are a lot of questions: What did this fighting achieve? What do we do now? What is “normal” now that the life we knew prior to war has been exterminated? That is what the young men seek to resolve on this illustrated journey.