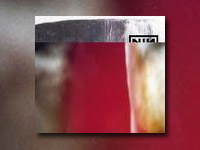 Trent Reznor and his band, Nine Inch Nails, are an easy target of condemnation, if not demonization. The heir of Kurt Cobain’s alternative rock legacy, Nine Inch Nails attract fans from the most alienated and misunderstood corners of youth culture—Goths, punks, heavy-metal heads, and hardcore rockers. Tuesday, September 21, 1999, was the much anticipated release date of Reznor’s first album in five years, The Fragile. The album begins where he left off with his 1994 masterpiece of despair, The Downward Spiral, unleashing a gripping and disturbing 104 minute lyrical and sonic poem on fighting the undertow of hopelessness. If there is any optimism at all in The Fragile, it is found in its depiction of resistance rather than resignation, a cry for help rather than cynical abdication.

Do you know how far this has gone?
Just how damaged have I become?
When I think I can overcome
It runs even deeper
Everything that matters is gone
All the hands of hope have withdrawn
Could you try to help me hang on?

Trent Reznor, now 34, is a popculture icon. He has produced ten records, won two Grammys, founded Nothing Records, produced Marilyn Manson, and written soundtracks for Peter Lynch’s Lost Highway and Oliver Stone’s Natural Born Killers. In 1997, Time magazine named him one of the 25 most influential Americans and Spin magazine called him the most vital person in music that year. Clearly, for all of its dissonance and despair, his music bears our close attention; he has captured feelings that are all too prevalent in teenagers today. One fan wrote to amazon.com this summer, “I realized that Trent Reznor is God six years ago when I first heard ‘Broken.’ It sounds corny, but it changed my life. Reznor is not a musician. He is the only person in this world who knows what the voices in my head say, and he speaks to the voices with his music.”

Nine Inch Nails is the counterweight to the sappy popteen musicians who care more about their outfits than their outlook. “I just don’t feel much depth out there,” Reznor told Robert Hilburn in the Los Angeles Times. “I think anything that is dangerous and exciting about rock music has moved over to rap or to hiphop.” Anger is largely absent in The Fragile. Beyond scapegoats, one finds a mirror of the postmodern soul. With brutal honesty, Reznor searches for reasons to carry on in a world without meaning.

Nihilism is an inherently unstable and unlivable world view. It can be sugarcoated for a time, but God’s reality always intrudes. The Fragile is largely Reznor’s autobiographical account of his emotional, mental, and spiritual collapse while touring Downward Spiral. “It [was like] New Year’s Eve every single day. I had everything I wanted, and I wasn’t feeling good about it.”

But for all his honest soulsearching, Reznor has few answers. Therapists gave him BandAids for his gaping wound. “[They] said, ‘You’re not up and down, you’re just a quart low. Not bad. I’m aware of my fragility now, which is a better thing. I’m not afraid to admit it,” he told Time’s David Thigpen. A quart low—a chemical imbalance. Metaphysical angst as psychological depression. Prozac becomes the antidote to nihilism; the blurred serenity, the way to forget the pain.

In the blur of serenity
Where did everything get lost?
The flowers of naivete
Buried in a layer of frost

And so The Fragile comes full circle to a “naked, ugly end” once again. “I wanted this album to sound like there was something inherently flawed in the situation, like someone struggling to put the pieces together. Downward Spiral was about peeling off layers and arriving at a naked, ugly end. This album starts at the end, then attempts to create order from chaos, but never reaches the goal. It’s probably a bleaker album because it arrives back where it starts—[with] the same emotion.” The album begins “Somewhat Damaged” and ends “Ripe (With Decay).” Depression drugs not withstanding, despair remains unabated.

By the end of this double CD we clearly see the fragile “bruised reed” for whom Christ came and died. Reznor pleads in his despair, “Where is everybody?” Will we, the church, be there with open arms? Or with condemnation?