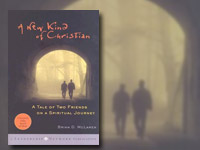 When Christians read Brian McLaren’s book A New Kind of Christian, they have one of two reactions: either they recoil because he is challenging the core of the Christian faith, or they feel great relief that someone has finally seen Christianity in this new way. I will admit that I expected to be in the first category, but I (somewhat shockingly) find myself in the second. Perhaps if I explain some of McLaren’s ideas, you will see how I find myself on this unexpected path (or sliding down this slippery slope).

McLaren, the pastor of Cedar Ridge Community Church in the Baltimore/Washington area, seeks to explain the ways in which the churches in the Western world, liberal or conservative, Protestant or Catholic, have been taken captive by “modernity.” This modern way of thinking has shaped and formed the Christian faith in its own likeness, a likeness that is often far from the image of God. However, it is difficult for people who have been eating, sleeping and breathing modernity to see that their way of understanding the Christian faith has been molded by this great and powerful force.

Postmodernity, another great and powerful force, is a reaction to modernity and is in many ways replacing modernity in the West. How will this impact the Christian faith? McLaren gives some possible scenarios using the format of a dialogue between two people, a modern man and a postmodern man, who represent these two forces. Although his writing is sometimes uneven, McLaren is attempting to describe the tension between modernity and postmodernity using a postmodern form: narrative. The book is not a list of doctrines, nor is it a theology textbook. It is a story.

McLaren begins by describing his own spiritual journey and his own intellectual development as a search for the answer to this question: “Why am I not the same kind of Christian I used to be?” His answer is that he lives on the brink of a huge worldview shift. The West is leaving the modern world and moving into the postmodern one. Just as modernity shaped Christianity, so postmodernity is and will continue to shape our understanding of authentic Christian faith. McLaren describes this worldview shift by imagining two people in a conversation, Pastor Dan who represents the modern Christian and Neo who represents the postmodern Christian or the neo-Christian. By the end of the book, it is clear that McLaren is making a case for neo-Christianity, “a new kind of Christian”.

This book has caused some controversy among Evangelicals, mainly because McLaren is indicating that Evangelicalism is not the pure Christian faith but rather is Christianity seen through the lens of modernity, or perhaps forced into a modern-shaped box. He questions many of the beliefs and practices that are central to an Evangelical understanding of the Christian faith: beliefs such as the inerrancy of Scripture, and practices such as the emphasis on an individual personal relationship with Jesus.

Although many people may be surprised by McLaren’s views, his ideas are not new or unique. For the last decade, theologians Nancey Murphy (Professor at Fuller Seminary and co-author of Beyond Liberalism and Fundamentalism: How Modern and Postmodern Philosophy Set the Theological Agenda) and Stan Grenz (Professor at Regent College and author of a number of books on postmodernism including Renewing the Center: Evangelical Theology in a Post-Theological Era), among others, have been pointing out the connections between Evangelicalism and modernity. Grenz has also written extensively on ways to be postmodern and Evangelical. What McLaren has done that is unique is package Murphy and Grenz’s views so they can be understood at the popular level. In addition, McLaren has attempted to address many of the questions churchgoers might have about his views.

Having rejoiced (perhaps too much) in McLaren’s approach, I do want to point out a few areas in which I am not convinced by his views. Although he states that we should not say “modernism-bad, postmodernism-good,” he seems to embrace his understanding of postmodernism uncritically. Of course, one of the characteristics of postmoderism according to McLaren is that it is “post-critical.” As an academic, I say there is still room for critiquing any number of ideas, including postmodernism. This brings up a larger question: is postmodernism as it is popularly practiced more welcoming to an authentic Christian faith? McLaren seems to assume this, and I am also leaning in this direction.

Modernity was about finding final answers, but postmodernity is about the process. Therefore, as I get to the end of this review, I ask myself not “is this all that can be said about Christianity and postmodernism?” but rather as McLaren asks in his introduction, “Are we making progress?”

A New Kind of Christian: A Tale of Two Friends on a Spiritual Journey by Brian D. McLaren ( San Francisco, CA: Jossey-Bass, 2001)