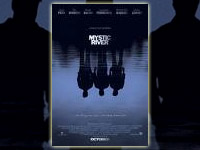 In the opening frames of Mystic River, the most recent in a long line of philosophical films by Clint Eastwood, three boys, looking for something to do after losing their street hockey ball down a Boston south side storm drain, bend over a block of wet cement. Their ringleader, Jimmy Markum, eggs on his two companions, Sean Devine and Dave Boyle, in order to get them to join him in writing their names. “Our names will be there forever,” he says. An idle comment, made in a moment of aimless wandering by boys too young to know what matters, defines three trajectories in life that will reap huge consequences for all three, and forces us to reconsider our own lives and the moments that at the time seem so common and unexceptional, but in fact mark out the separate roads we journey forever, and irreversibly.

As the boys are writing their names, two men drive up, and, posing as police, accuse the boys of vandalism. Within moments they have taken Dave with them, terrorizing him with four days of sexual abuse, before he escapes. The film flashes forward twenty-five years where Markum (Sean Penn), Devine (Kevin Bacon) and Boyle (Tim Robbins) all still live in the working-class neighborhood. Markum, once a small-time hood, now owns a neighborhood grocery, has three daughters and a wife, and, though filled with a nervous anger, appears to have gone straight. Devine, a homicide detective whose marriage has recently crumbled, receives strange phone calls from his wife in which she simply sits on the other end of the line, waiting for him to speak. Boyle, “marginally employed” as one reviewer put it, still shows the signs of his brutal, childhood experience: with hunched shoulders, he ambles through life, hearing the wolves.

The three friends have drifted apart over the years, separated by either guilt for not being the one taken, or shame at being the one who was. The murder of Markum’s older daughter throws them back together, and events unfold that force them to deal with the horror which continues to haunt each of them. Full of questions and devoid of answers, River broods and boils with rage, anxiety, helplessness and despair. Critics uniformly recognize its lyrical despondency. David Edelstein, writing in Slate, relates that the movie’s mood and tempo suggest “a certain tragic inevitability that flows grimly, relentlessly, toward us.” Roger Ebert is equally bleak: “The movie is about more than the simple question of guilt. It is about pain spiraling down through the decades, about unspoken secrets and unvoiced suspicions.”

Eastwood has forged a reputation as a “daring auteur with a strong moral vision” (Edelstein, though in disagreement with this prevailing sentiment). His thrillers (Play Misty For Me, 1971), mystical westerns (High Plains Drifter, 1973; Pale Rider, 1985; and the Academy Award winning Unforgiven, 1992), war movies (Heartbreak Ridge, 1986) and crime capers (A Perfect World, 1993) never stray far from the edge of Kierkegaard’s abyss. In Mystic River, from the opening helicopter shot, he takes us down into a commonplace neighborhood of Irish urban Boston and shows us life in America, the complex land of lofty, immigrant dreams and dark, tragic realities.

Perhaps the theme lying closest to the surface in River is that of the awful inevitability of life. When the boys write their names, Dave’s is never finished; the camera comes back to this spot at the end of the film, reinforcing the idea that some experiences never reach the end of their terrible consequences, robbing some people, for reasons known only to God and fate, of ever having a whole life. With passionate performances by the entire cast, the characters, who are sometimes fully formed in only five minutes of screen time, bleed the inevitable tragedy of life in a meaningless universe onto the screen with an emotional power not seen since Chinatown. Sean Penn and Tim Robbins deserved their awards, but Kevin Bacon, Laura Linney, and Marcia Gay Harden just as fully merit applause for their contributions to Eastwood’s vision, as do Brian Helgeland for his imaginative script and those responsible for the cinematography, lighting, sets and music of this nearly perfect film.

This vision is not without its theological note. Over and over again, Eastwood’s camera either tilts upward from a scene of heart-wrenching tragedy to a sun-lit sky, pleading with heaven to make sense of the senselessness of life’s terrible contradictions, or shoots from the abstract, bird’s eye view, coldly observing the travails of men and women below, as their hopes are crushed and their certainties spun into powerless disarray. One scene, rapidly becoming the signature scene of the film, shows Markum being subdued by police as he struggles to get free to see if it is his daughter who lays dead in the park. As Penn wails at the skies, Eastwood cuts from a ground level, “normal” view to a high angle shot from directly above the teeming, chaotic scene. Zooming slowly away, as the police wrestle Penn to the ground, the camera presents God—and us, the viewers, in His place—as helplessly retreating, distantly examining the anguished writhings of the human condition. God, if He exists, just doesn’t care.

And lest there be no mistake about the extent of Eastwood’s despondency reaching to, if not focusing on, historic Christianity, the movie has a number of frontal assaults on that best image of the faith among Irish, working-class Bostonians—the Roman Catholic Church. From the opening scene where one of the two pedophiles is ostentatiously presented as a priest, through the mocking joy of the first communion of Markum’s youngest daughter while his oldest daughter’s murder is being discovered outside in the “real” world, through to the end of the film where Jimmy rages against the inevitability of his guilt resulting in violence, the Catholic communion is made to be the root of all evil, offering false hope and spreading violent cruelty to its helpless victims.

As if this visual and narrative condemnation were not enough, the dialogue of the film supports this sardonic view of life. Devine, when he is sure that the dead girl is Markum’s daughter, muses “What am I going to tell him? God said you owed another marker, and came to collect?” and at another point simply shrugs and says, “I’m tired of wishing things made sense.” Penn, who packs every scene with an intensity and largeness of purpose that makes his one of the great performances in recent memory, stands over his daughter’s body in the morgue, and after vowing to get her murderer, says resignedly, “I know in my soul I contributed to your death; I just don’t know how.” In the climactic scene of revenge, he sprinkles confessional metaphors about penance and guilt into his rambling, distraught speech, as events move toward their dreadful conclusion.

So what do we as Christians take away from this two and a half hours plus of despair and hopeless gloom? First, as always with a film that offers no way of escape, we can rejoice that false optimism is rejected. Christians believe that apart from the stability and purpose we find in our redemptive faith, there is no other, and that the truth, which best helps one to find that divinely offered meaning, is that which proclaims humankind as alone and desperately lost without Christ. Secondly, a film like Mystic River can be a stimulus to us to weep afresh for the sins that have caused the alienation and disaster mankind experiences everyday, whether on the streets of Boston or in the mountains of the Sudan. We don’t hate evil enough, least of all the evil resident in our own hearts. Lastly, the excellence with which Mystic River accomplishes its artistic presentation should be a fierce, painful goad, prodding Christian artists—and those of us whose “art” is simply living beautifully before God—to set standards that are ever higher and higher and to endure the pain it takes to reach them. God help us as we seek to present His gift of joyful redemption as masterfully as the director, cast and myriad artists who contributed to Mystic River presented their vision.

1. Is the view of God that this reviewer has seen in Mystic River in accord with how you saw the film’s vision? Why, or why not? 2. Where did you find artistic excellence most fully revealed in the film? What other technical achievements did you find exceptional? Why? 3. Which scene moved you most and why? Roger Ebert wrote about this film that “it is very much about the private loyalties of husbands and wives.” What do you think he meant? The Laura Linney character has been likened to Lady Macbeth (her name in the film is Annabeth). Do you think this association is valid? Why, or why not? 4. The review finds “inevitability” as a major theme of the film. What theological issues does this idea touch on? How are those portrayed in the film? What experiences in your own life have had a quality of “inevitability” about them? How do you understand these events from a Christian perspective? 5. With which character did you most fully identify? Why? Some reviewers have remarked that the plot of the film seems almost secondary to its characterizations. Do you agree? Why, or why not?