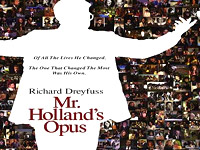 Mr. Holland’s Opus has much to tell us, but in its rush to do so it sets up shop awkwardly: Roadweary musician Glen Holland accepts a music position in high school but finds the profession of teaching to be out of his element. A “courage” motif kicks in when a teaching colleague and his adoring wife both offer inspirational words; Holland breaks through to disinterested students by employing radical teaching methods in the face of conservative opposition, then exercises profound influence on selected underdog students. By the forty minute mark, I’d given up on Opus.

But the film never quits. Mr. Holland’s love for his students began to infect me, beginning with the overtime clarinet lessons he gives to Miss Lang. Miss Lang does not appear attractive, either to Holland or to us, but we see in his relationship to her a hint of the disproportionate devotion he gives to music students that begins to crowd out his wife and son. As he grows distant and perfunctory at home, he fills himself at school with stimulating working relationships with talented students until finally our earlier suspicions are fulfilled, uncomfortably, by a young beauty who seeks his affection.

So, this is an obsession story after all? I began to expect “guilt-ridden professor meets secretly with irresistible pupil for inevitable crash and burn fate,” and I prayed for innocence. I pleaded with Mr. Holland to turn away from this siren. Please, don’t touch her, don’t kiss her. Don’t compose a song about her. Go home to your wife. Get to know your son; he’s starving for your attention.

Maybe Holland will abstain, heroically, from this temptation. Maybe this film is really all about one man’s moral integrity. But Opus cuts a channel deeper and wider than any single relationship. As the focus shifts back to Holland’s emotional desertion at home, opportunities for redemption present themselves, but not without difficulty. Ironically, Holland finds himself once again out of his element. He seems to be working at crossed purposes. Can the professional discipler disciple his own? Perhaps the paradigm is wrong. Perhaps one doesn’t shape family members in the manner of the marketplace. Something else will be required here, now, from Mr. Holland, the prodigal father returned home from a great distance.

Opus doesn’t come to us gift wrapped in Hollywood paper. I wanted at first to shove the story into one of my reliable file folders: “period piece” with boomer nostalgia, “forbidden love triangle,” or romantic comedy. But it escapes all these weary categories, succeeding instead as a study in teaching and mentoring. Those of us involved in teaching know that it is a noble but sometimes tragic calling. Students and former students disappoint us, succeed because of and in spite of us, and sometimes face their own tragedy. Teachers rise and fall with these turn of events, unable completely, to distance themselves emotionally from pupils’ lives. The pressures of teaching can be massive in the workplace and, as we see through Glen Holland, at home as well.

Mr. Holland’s symphony, his Opus, has more to do with lives restored than notes played. His students and family are his music, written on his heart, commending him to us and instructing us about the meaning of lifelong investment in something worthwhile: people. And in the end the people of Opus grow to be our friends. Their lives are not simple. Life itself is not insulted by cinematic reductionism in this film.

Be patient with Mr. Holland’s Opus. Plot and character development come out swinging at the bell, but later the story settles, works on you, widens and deepens. Before you know it, you’re drawn unexpectedly into a small epic, forgetting you’re in a theater, praying the best for Glen Holland, extending a cautious trust to Hollywood, hoping a movie director will handle life as if it’s real life.

1. How does one find a balance between vocation and home life? If vocation were to become more attractive to us than home life, what could be done to restore the balance? 2. What do we do if we feel disinterested in our own children and family? 3. Do job skills such as management, selling, and pedagogy work at home? Why or why not? 4. In what respect might we consider ourselves teachers or disciplemakers similar to Glen Holland? Why is this a worthwhile endeavor?