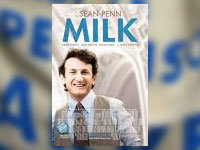 There’s a scene in the middle of Gus Van Sant’s Milk that, for me, captures the heart of the movie. The apartment Harvey Milk and his partner, Scott Smith, share is crammed with volunteers who are trying to get Milk elected to San Francisco’s Board of Supervisors. It’s late, after dark, and Harvey looks haggard as he talks loudly to a couple of volunteers above the din of everyone else’s conversations. Scott takes a pot off the stove and looks for Harvey. “Harvey! Dinner”: he barks it as a command, trying to make Harvey take a seat and relax for a few minutes. He doesn’t have much success. Finally, exasperated and exhausted, Scott raises his voice, “Everyone: This apartment is now off limits! Good night!” In a few minutes, it’s just he and Harvey sitting down at the table together. “Don’t say anything,” Scott orders. “Can I just tell you…?” Harvey asks meekly after tasting his first bite, a mischievous smile playing at the corners of his lips. Scott rounds on him: “If you say anything about politics or the campaign or what speech you have to give or anything, I swear to God I’m gonna stab you with this fork.” Undeterred, Harvey keeps looking sweetly at his partner and finishes his sentence: “I just wanted to say… that this is the most wonderful dinner I have ever had.” And with that, the tension dissolves. Harvey places a hand on Scott’s shoulder, Scott can’t suppress a smile, the two laugh. They’re back to being a normal couple again, forgetting for a fleeting moment the rigors of the campaign and the opposition they’re facing.

That’s what the movie Milk is about. A biopic of the figure who became the first openly gay man elected to major political office in San Francisco and who galvanized a generation of gay rights advocates in the process—in the end, it’s a love story. Andrew Sullivan, a writer for The Atlantic, put it like this: “The movie’s brilliance is… that it begins and ends with Milk’s love for another human being… This reach for intimacy—always vulnerable, … never safe—endures past movements and rallies and elections. [The] manifestations of the political are the means to that merely human end.”

The film opens in 1970 in New York City. Harvey Milk (played brilliantly by Sean Penn) is nearly middle-aged, eking out a living as an insurance salesman. “Forty years old, and I haven’t done a thing I’m proud of,” he complains. Randomly, Milk meets Scott Smith (James Franco), who would become his long-time lover, and persuades Smith to leave New York with him to begin a new life in “the Castro,” a San Francisco neighborhood that, partly through Milk’s activism, becomes widely known as a refuge for gays who come from every corner of the country looking for a fresh start.

After withstanding one too many attacks from a hostile police force, Milk decides to run for a position on the Board of Supervisors, to advocate for the “us’s,” the embattled minorities, who bear the brunt of institutionalized bigotry. Winning doesn’t come easy—it “isn’t my strong suit,” Milk confesses at one point with a wan smile—but eventually the hard work pays off, and he gains a seat on the Board. He uses his influence to campaign for equality, but shortly after his greatest victory—the defeat of Proposition 6, which would have prohibited gays and lesbians from teaching in California’s public schools—Milk’s life is cut short by a fellow Board member. Dan White (Josh Brolin), a conservative Roman Catholic (who, the film hints, may himself have been a closeted homosexual), assassinates Milk in his office. With Milk’s death, San Francisco is deprived of one of its most powerful champions for social justice and, perhaps more poignantly, Scott Smith loses his lover and beloved.

For Christian viewers, Milk raises many questions. We Christians, after all, have in Scripture and in the teaching of the Church throughout the ages a moral judgment against same-sex eroticism. Homosexual behavior is sinful, according to the Christian grammar. And yet a film like Milk confronts us with a poignant, at times heartrendingly beautiful portrayal of loving, caring, loneliness-diminishing gay relationships. How should we respond?

One way is to refuse to accept the film on its own terms. Where the movie urges us to see a community of loving, caring people beleaguered by an ignorant majority culture wielding restrictive power, we may instead offer an alternative, suspicious interpretation: Far from being loving and caring, the gay men depicted in the movie are perverted and promiscuous, deceiving themselves about the true nature of their destructive behavior. What the movie names as love, we may choose to see as self-gratifying lust.

Another way to respond to Milk is, of course, to do the opposite—the take it at face value, to affirm its outlook, approve its politics, and abandon the traditional Christian view of the wrongness of homosexual practice as a vestige of an outmoded worldview that will only lead to violence and oppression if we continue to promote it today.

Either of these approaches is possible—and one doesn’t have to look very far to find viewers who have already embraced one or the other of them. But I wonder if there isn’t another way. Might we glimpse in Milk a portrait of genuine human love and courage, which, however cracked and marred, nevertheless gestures toward what we Christians believe is embodied fully and ultimately in Jesus Christ? Or, to put it more provocatively: Can sinful behavior, in some paradoxical way, when it is a groping for intimacy and an effort to stave off loneliness, be seen as a hunger for grace?

After visiting an AIDS ward once in San Francisco, the late Henri Nouwen reportedly said of the gay men he met there: “They want love so bad, it’s literally killing them.” Maybe we should watch Milk from the same vantage point. When we see Harvey and Scott touch each other tenderly over a shared meal, we may catch a glimpse of what it looks like to reach for love and the end of loneliness. And we may also see a challenge for ourselves—to so embody the holy love of Jesus that men like Harvey and Scott might be moved to consider it more than just a ploy to perpetuate their isolation and legislate their oppression.

1. What did you notice about the artistry and technical aspects of the film? As a piece of cinematic art, how would you rate it? Did you find it complex or moralistic, dramatically sophisticated or cliché, interesting or banal? Why? 2. The Christian ethicist Stanley Hauerwas has written an essay with the provocative title “Why Gays (as a Group) are Morally Superior to Christians (as a Group).” This title might be taken as a good description of several scenes from Milk. In what ways do Harvey Milk and the other gay activists in the Castro demonstrate the sort of character we Christians ought to emulate? What can we learn from them? 3. Whom do you identify more with in the film—the conservative Christians (Senator Briggs, Anita Bryant) or the sexually promiscuous gay characters? Why? Did you feel torn between wanting to disagree with one or the other’s political positions while at the same time wanting to affirm their longings, hopes, fears, worries? If so, describe. 4. W. H. Auden once suggested a game: Pick two people who are known to be arch-enemies and imagine what would have to happen for them to come to terms, understand, and maybe even start to love each other. Try playing this game with characters from the film. For example, what would Cleve Jones and Anita Bryant, or Harvey Milk and Dan White, need to do or say in order to move towards reconciliation, forgiveness, mutual respect, understanding, and love? 5. Given the recent passage of Proposition 8 in California in November 2008 and the resignation of Rich Cizik from his position as president of the National Association of Evangelicals in the wake of his controversial comments on “gay civil unions,” the issue of “gay marriage” will probably lie just beneath the surface of any evangelical Christian discussion of this film. Are Christians who hold to the traditional viewpoint on the immorality of homosexual behavior necessarily committed to opposing the legalization of gay marriage in a secular, pluralistic democracy? Why or why not? Does a film like Milk shed any light on this discussion? 6. Imagine yourself in a conversation with one of the movie’s gay characters. Assuming they are unfamiliar with Christianity and the contents of the Bible, how would you try to explain to them the historic, orthodox Christian views of (homo)sexuality, marriage, bodily desire, fidelity, and “purity”? Try to do this exercise without using any Christian jargon and force yourself to confront the “But why?” question at every turn. What is the logic of the Christian viewpoint? Is it credible? Is it compelling? Why or why not?