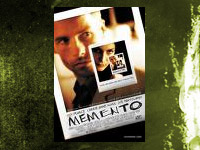 Immanuel Kant, the famous 18th century German philosopher was known for his obsession with order, an obsession that enabled his Königsberg neighbors to set their watches by when he took his afternoon walk—exactly three-thirty every afternoon.

One day, Kant had to discharge his faithful servant Lampe who had been with him for many years. The event was so painful, however, that Kant could not get Lampe out of his mind, and this troubled him greatly. He is reported to have made an entry in his memorandum book as a result: “Remember: from now on the name of Lampe must be completely forgotten.” (The Little, Brown Book of Anecdotes, ed. by Clifton Fadiman, pp. 320-21).

Memento, the best film to be released in 2001, is about memory, truth, forgetting, revenge, perspective. But wait a minute: let me back up.

The movie starts with a shot of a man’s hand holding a Polaroid fully developed. Slowly, the viewer realizes the image is fading, even though the hand shakes the Polaroid from time to time as one does when trying to speed its development. There are more shots: extreme close-ups of blood running and of an empty shell casing, and you begin to feel that something is strange here as the Polaroid continues to fade.

So begins one of the most stunning rides in recent American movie history. Memento, directed by Britisher Christopher Nolan from a short story concept told him by his brother Jonathan on a cross-country car trip, is the story of Leonard Shelby, an insurance claims investigator who surprises two men raping his wife and in the ensuing struggle is knocked senseless, saddling him with a condition known as anterograde memory loss—he remembers everything prior to the attack, but cannot make new memories except by extreme repetition (which only seems to serve to remind him that he has this condition). He never remembers people, where he is staying, why he is in a room, what he just said (or what someone just said to him)—everything is forgotten within minutes.

Not surprisingly, this makes Leonard unusual and a target for those who feel they might be able to use him for their own ends. A motel clerk rents him two rooms and then even tells him of the scam because he knows Leonard will not remember. But his “condition,” as Leonard (played masterfully by Guy Pearce, the Australian actor who was the straight-laced Lt. Exley in L.A. Confidential) constantly refers to it, renders him available for more deadly games, and the plot turns around his inability to remember, how others alternately help and use him, and whether or not he will fulfill his goal—to catch and kill his wife’s rapists and murderers.

To this point the movie sounds like a standard-fare film noir, and on many levels it is. Shot in seedy Los Angeles, populated almost entirely by morally bankrupt characters, even costumed in cheap or sleazy clothes, this film is one of the best noirs in some time. A complicated plot with murders, mis-steps, conspiracies, and revenge-takings galore, one can view the movie at that level and eat one’s popcorn, too.

But Memento asks so many deeper questions of modern life and postmodern philosophy that to treat it as a simple movie is to miss the opportunity to think deeply about memory, truth, perspective and their relationship. To delve too much into these matters would endanger giving away the plot, but suffice it to say that the idea of choice in forgetting is a major theme of the plot.

Why do we forget what we do? Is it to protect ourselves? How important, for instance, is it for us as Christians to remind ourselves of our pasts so that we never forget what we were and are without Christ? Do we create a fiction of ourselves as righteous only because God’s Spirit has worked in us to triumph over sins that used to beset us more easily? These are questions that Leonard is forced to ask in a secular context, that Memento spurs us to ask of ourselves in a very different way.

And the questions abound. Leonard spends his life focused on one thing and one thing only: revenge. In fact everyone in the film seems to want revenge on someone or something else: Teddy is a former policeman who deals drugs; Natalie’s main purpose in the film is to get revenge for the death of her boyfriend.

Leonard’s grotesque tattoos, one of his means of reminding himself of things he wants to make sure not to forget, include things like “Memory is Treachery” and “Find Him and Kill Him,” reinforcing revenge as the basis for his life. At one point Natalie asks him why he wants revenge so badly since he’ll only forget that he got it anyway so he won’t enjoy it. His answer is stunning: “It doesn’t matter if I remember it; my wife deserves justice.”

The form of the movie supports the problem Leonard has and gives us his point of view by, after the opening sequence, shooting each sequence in normal linear time but shuffling the sequences so that the next one explains what just happened, not vice versa as in a normal movie. Interspersed with these color sequences are black and white sequences of Leonard on the telephone telling a story that explains much of his rationale for what he does. While this is confusing, that is the point: Leonard has chosen to blur fantasy and reality and that choice has severe consequences.

This is a dark, hard movie to watch, but well worth the time and effort. Remember not to forget to see Memento.

1. What was your initial or immediate reaction to the film? Why did you react that way? 2. What is the significance of this story? Why bother telling it? Why is it worth reflection and discussion? What does it reveal about humanity as created in God’s image in a fallen world? 3. With whom did you identify in this movie? With whom are viewers meant to identify? Discuss the different characters in the film and their significance to the story. Are there any truly good people in the film? Who? Why do you think so? 4. How do you answer someone who says that truth “is only a matter of your perspective”? 5. The film is made up of a great many sequences—which made the greatest impact on you? Why? 6. What insight does the film give into the way postmodern people see life, meaning, and reality? How can you use the film as a useful window of insight to better understand your non-Christian friends and neighbors? 7. Might the film be a useful point of contact for discussion with non-Christians?