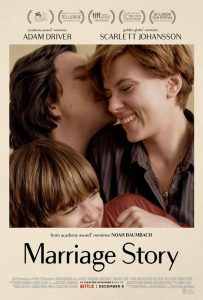 A death without a body

From the beginning my goal in Critique has been to call attention to films that are worth discussion and reflection. The cinema and the best television tell stories that help shape the social imaginary of our generation. Some films are so significant that they shape values and perceptions even of people who never saw them as the culture shifts under their influence. Some partake of ancient myths, some grant us a glimpse of lives and places far from where we are, spanning time and space to broaden our comprehension of reality. It isn’t necessarily the most popular films that have the greatest impact or address issues most effectively. In any case, I’ve tried to identify films that offer a window of insight into our glorious yet broken world, providing a point of contact where people can authentically engage with the issues and questions that matter most. By this standard Marriage Story (2019) is an obvious choice, a decision I made even before I had finished watching it.

In fairness I should add that though I am here encouraging you to lead discussions on it, I probably won’t. The reason is simple: leading a discussion would mean needing to watch it again with the group discussing it. I’m not certain I want to do that. Marriage Story is not an easy film to watch.

Marriage Story is about the end of a marriage, and it is relentless in its realism. In fact, the details depicted in the film were shaped by the divorces the writer, director and actors endured in their private lives. The depth of authenticity is stunning and as a result the brokenness, regret, hurt, arguments, court scenes, attorney interviews, uncertainty, family interactions and, yes, brief glimmers of hope that make up the story made me feel like I had stumbled into someone’s home to hear not just a report of their divorce but to see and hear it fleshed out in living color. Marriage Story does not make the viewer feel like an intrusive voyeur but like a best friend invited in to share the pain of a process that breaks apart something so intimate and permanent that no one can bear the cleavage. “Getting divorced with a kid is one of the hardest things to do,” attorney Bert Spitz (played by Alan Alda) says. “It’s like a death without a body.”

You may not want to watch it more than once but please do see Marriage Story. Divorce is too prevalent, too common to refuse to see its destructive process unfold as marriages unravel as good people try desperately to preserve something good afterwards not just for their own sanity, but especially for their children. Seen in this light, Marriage Story is a real gift, a severe mercy in a badly broken world.

Hearing the stories of sinners is often a painful experience. Being invited into your life is precious but it will necessarily involve facing your sin, failure and brokenness. Christ endured the pain in order to bring redemption and we must do the same. Actually knowing each other will involve difficulty and sadness.

The plot of Marriage Story is deceptively simple. Charlie (Adam Driver) and Nicole (Scarlett Johansson) are married and living in New York. They are involved in the theatre, as director and actor, and have an 8-year-old son, Henry whom they love. Nicole has long yearned to return to L.A., where her family lives and though they’ve discussed her dream nothing has come of it. Their work is in New York, the theater there is flourishing and like for so many life simply keeps unfolding so as to keep them there. Nicole takes Henry to visit her family in L.A.—who really are a delight—and decides that her marriage isn’t fulfilling her deepest desires. Too much of what has happened is really Henry’s preferences rather than her own.

“Nicole,” writes John Anderson in America, “has decided that being a wife to Charlie has finally meant sacrificing too much of herself. Charlie, though temperamentally inclined to a degree of self-doubt, thought he was doing O.K. Both are equally wrong. They resist falling into the pit of recriminations and legalistic dirty pool as long as they can. But they have attorneys, so they are lost.” The scenes with the divorce lawyers are despicable and the meltdown they share together in one last effort to resolve things is deeply human.

They divorce and the parting is not a good thing, but Charlie and Nicole also try to make possible a continuing friendship after their marriage is terminated. They do it for their son, Henry, the innocent caught in the breakup, but also for themselves. There seems to be a clear realization by both of them that what they had was good, not perfect, but good, nevertheless. So, some of what they had is worth saving. “Driver, Johansson and Baumbach bring you to your knees,” Peter Travers says in Rolling Stone, “through the hard truths and aching empathy they express to deliver the true meaning of being alive. It’s the kind of movie that will take a piece out of you.”

Some stories are tragedies, but they are still worth telling. Marriage Story is one such story, and I recommend it to you.