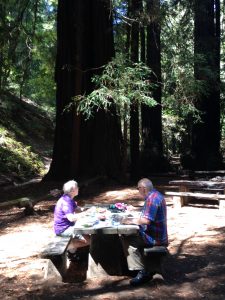 Drought – now there’s a word. Drought. Like California. Like now as I try to write. It’s been like trying to cough up fish bones from a dry throat. I’ve stared at the screen for hours. I’ve looked up the word venal. I’ve eaten a piece of Irish soda bread. I left my office to buy pumpkins and white mums only to find they cost too much. I mean for my current budget. So I bought a spaghetti squash instead because it’s something we can eat and there is this recipe in The Smitten Kitchen cookbook called Spaghetti Squash Tacos. Sounds gross, doesn’t it? [I made them later and they were delicious.] While I was out, with a huge gap in checkbook logic, I bought a latte. But this will help me feel better and I will be inspired, I reasoned.

Denis, Mr. Idea-Man, tells me to write about our trip to California. About the redwoods I’d always ever wanted to see and touch. I did! And our friends who live in a cool apartment for seniors. And how well the retreat went. And how many people I talked to who are miraculously standing after living through terrible loss – people who’ve looked at death and chosen to go on living. I could write about the California Drought which is heartbreaking the countryside. But I want to quit writing, because it gives me a headache. I want to read my book, the one I supposedly only allow myself to read in the evening after my “real” work is done. The Cuckoo’s Calling by Robert Galbraith aka J.K. Rowling. A detective story that is already a #1 National Bestseller. I am so depressed! The first thing I said about it was “She’s begun a series!” Denis says, “She has. I already have her second book. Same detective.” I knew it! You know she really didn’t write the Harry Potter books as a series, she had the whole thing already done planned out in her head before the first one ever hit the market. More to admire. And now Denis walks in and announces, they’ve released her third Cormoran Strike novel. I am so depressed! I’m a little ashamed of myself, but perhaps there are reasons to be more depleted than I allow?

Besides death and funerals – the Great Aunt and Ed Hague went Home – we are parenting our oldest granddaughter and glad to do so, but it was no one’s number one plan for how she would spend  her senior year, least of all hers. Nor was it quite what we imagined for the stable, calm writing life here at House Between. It’s almost laughable. We are into driving lessons, (only nicked one mailbox so far) parent/teacher conferences and watching Scrubs reruns. Our appliances have continued on a path of self- destruction, Denis had a medical scare and our granddaughter fought off an internet catfish that frightened and angered me more than Donald Trump’s comments about women.

That life we want. The one without sickness and suffering and financial hardship and everyone we love happy and safe is something we can imagine, but it isn’t ours to have yet.

Christianity teaches us that “no matter what precautions we take, no matter how well we have put together a good life, no matter how hard we have worked to be healthy, wealthy, comfortable with friends and family, and successful with our career — something will inevitably ruin it.” (Walking with God through Pain and Suffering by Tim Keller.) Indeed.

On the Sunday afternoon I went for a walk, it had been five days since Ed died. Three weeks since the Great Aunt passed away. It is odd to me that some people do their best thinking and praying while walking. I can’t do anything except walk in a cloud of whatever current emotion I’m feeling and maybe look for mushrooms. That  day I asked if God would show me something in creation that reminds me to be happy. Any little thing would do. When I got back, I sat on the deck to watch birds come to the feeders. That’s when a small revelation flew to the rain gauge and sat atop it with a sunflower seed. Chickadees  are one-at-a-time grabbers. They snatch a single seed, fly to a perch, clutch the seed in their claws and hammer it open with their beak. Usually they land on a branch, but not even a bird can get purchase on the rim of a glass tube. After the first peck the seed fell to the bottom and she looked baffled as she stuck her head down the tube trying to reach it. When that didn’t work she hopped down beside it and pecked at the glass wall. She could see it right there, but it was totally out of reach. She didn’t waste more time over this puzzle, but simply flew back to the feeder, snatched another and sat on a more hospitable branch to crack it open. It was a humble, ordinary thing that felt joyful and full of God.

Elizabeth Elliot writes that “No matter how far along our spiritual pilgrimage we may have come, we need to be shown time after time that humble ordinary things can be very holy, very full of God. We may hope for visions and revelations and wonderful experiences, forgetting that the context of the revelation of God to each one of us is, exactly where we are – here on earth, in this house, this room, this work, this family, this physical body.”

Tim Keller notes that “while other worldviews lead us to sit in the midst of life’s joys, foreseeing  the coming sorrows, Christianity empowers its people to sit in the midst of this world’s sorrows, tasting the coming joy.” Ed would have liked this quote. It’s what he did so well the last three years of his life. He sat in sorrow and suffering, and found that God met him exactly where he was, right square in the middle of cancer, and he sat with it tasting both sorrow and joy and a love that he lavished on everyone in his orbit.

This year I’ve included a book in my gift list that I hope you read. Many things stood out, but there was a paragraph I loved in Just Mercy where Bryan Stevenson describes his black pastor who, as the organ started and the choir began to sing, would spread his arms wide and call out to his people: “Make me to hear joy and gladness that the bones which thou hast broken may rejoice.” (Ps. 51:8 KJV)

(This essay first appeared in Letters From the House Between #4 2015.)