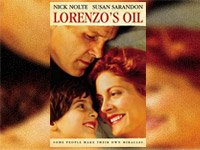 On the surface, Lorenzo’s Oil is the powerful, true story of Lorenzo, Michaela and Augustus Odone who, when a fatal illness strikes Lorenzo, face the crisis with remarkable courage, perseverance and skill, finding a cure for Lorenzo’s disease. This film is, however, so rich in themes and intellectual questions that move beneath its surface, while at the same time full of heartstopping emotional intensity, that viewing it is an experience both exhausting and exhilarating.

As a young boy, Lorenzo contracts adrenoleukodystrophy (ALD), a rare and only recently discovered disease that causes a slow degeneration of the brain, exhibiting symptoms that move from erratic and inappropriate emotional behavior to loss of the ability to walk, see, talk and finally breathe. It is portrayed as every parent’s worst nightmare, and Michaela and Augustus, movingly played by Susan Sarandon and Nick Nolte, decide to fight rather than submit to the disease.

But the fight is not an easy one and the couple encounter one road block after another. First, the disease is so newly discovered and so rare that there is virtually no treatment and very little hard data on it. Second, the research being done on the disease is poorly funded due to its rarity, and the doctors, while portrayed for the most part sympathetically, are loathe to depart from their protocols in order to try the unproved theories which the Odones have adopted. The third obstacle comes from the only foundation set up to help with the disease. It is funded by parents who have lost hope and believe their only function is to serve as therapeutic helpers to the parents facing the deaths of their children. They throw cold water on attempts by the Odones to find a cure. Fourth, and most dramatic, is the roadblock of their own motives. Are they doing this for Lorenzo or for themselves? Do they, the highly successful, highly motivated, highly educated Washington, D.C., couple, really have an obligation to find a cure at any cost or are they simply unable to come to terms with their own finitude and with the “defeat” Lorenzo’s death would represent? Undaunted, they press on with only their faith in God, their perseverance, and their love for Lorenzo keeping them going through an agonizing three years of research, financial loss, self-doubt, accusation by friends and family, and continued degeneration of their beautiful little son’s life.

Each of these roadblocks demonstrates a critical problem facing American culture today, and Lorenzo’s Oil offers a moving and thought-provoking medium for reflection on them. The first, and easiest dilemma to answer is the disease itself. One is reminded of the priest in Albert Camus’ famous novel The Plague who says that we must not fight the plague because it is God’s judgment upon us. The Odones never even consider this an option, though at numerous points during the film they are encouraged simply to let the child die. Their Catholic faith, underlined by scenes of the family at prayer and at worship, and a dramatic score involving a judicious use of classical religious music from masses, requiems and the like, keeps them going rather than preventing them from pursuing the cure. While the theme is not explicit, the movie seems quite clear on the “rightness” in God’s eyes of battling this horrible disease, and the Odones hang on to that faith throughout the movie, even when they have given up on help from the church.

The second roadblock sets up perhaps the dominant conflict of the movie. Time and time again, medical science with its slowmoving, straightline thinking of experimentation, control groups, and protocols is pitted against the oddball “lay” theories of the Odones. The almost comic pinnacle of this theme occurs when the Odones contract with a little old man in an obscure perfume company in England to make the bottle of Lorenzo’s oil that turns out to be the cure for the disease. The interlacing of scenes of the chemist puttering around in his ancient laboratory with scenes of the Odones arguing with the modern American doctor/researchers are a good example of the care and brilliance of the editing of this movie. A remarkable feature of the treatment of this theme by George Miller, the writer and director of the film—and himself a medical doctor—is that the medical professionals are not portrayed as the “bad guys.” Only an impersonal, mechanistic way of thinking that has no time for the love-motivated nonprofessional opinion is portrayed as evil, and even then, the fruits and benefits of modern science are not denigrated unduly.

The hostility of others who are suffering in the same way the Odones are is counterbalanced somewhat by the support of at least one mother who sides with them in their fight, and the roadblock thrown up by their opponents really serves more to highlight the last theme I will mention than it does the opposition of other parents. That theme is the notion of self-doubt. At crucial points in the film, the Odones, who have all the resources this world has to offer, are finally about to give up when a deus ex machina appears. Two scenes demonstrate the point. Augustus, having fallen asleep at his desk in the National Institutes of Health, has a dream in which he is given a vision of how to solve a crucial problem in his research—and it is Lorenzo that leads him to that solution. In another, when Lorenzo seems about to die from excessive seizures, his mother leans over and whispers in his ear that it is all right if he wants to fly home to be with baby Jesus, and he miraculously recovers. In both cases, it could be argued, God has given the parents a message through their son that He wants them to continue, that the individual must battle until they have nothing left with which to battle and that even then He will help them.

Lorenzo’s Oil is a triumph of a movie, brilliantly written, acted, and directed, compassionate and stimulating in its search to provide a model for man’s desire to conquer the destruction sin has wrought in our world. In a day when Lorenzo probably would have been aborted had his parents known what he and they would go through in facing ALD, it is a stirring reminder that truth and joy are only really found through facing life’s suffering and pain with a faith that acknowledges our creatureliness and the necessity of bowing the knee before the loving, holy One.