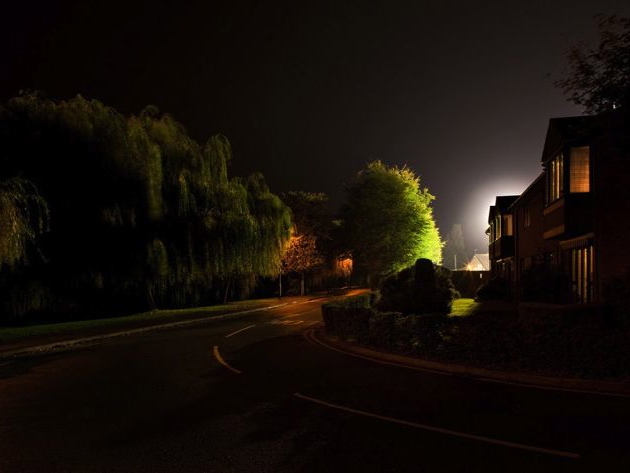 Opening the door and walking out into the warm night, I step out onto the suburban streets of my neighborhood, their grainy texture partially lit by hazy pools of radiance cast by slightly buzzing arc lights. It was a nice, long walk that I craved, desiring the turbulence of my thoughts to be sifted and fall into their proper places. The solitude of the quiet night world offered an atmosphere conducive towards reflection and relaxation, and thus, with purpose, I move out into its richness.

I walk past homes with curtained windows aglow with the spell of electric luminescence, wherein one might find eyes mesmerized, flickering with images, intoxicated by colorful diversions.

The streets were virtually empty, except for an occasional passerby, often a neighbor walking their dog. With one neighbor, pleasantries were passed, a token acknowledgment to the fact that a light brotherhood existed between us, induced by the simple reality that we lived in close proximity to one another. If it were not for this circumstance, perhaps only a single indifferent glance would have transpired between us. Beneath the surface of our greetings, there seemed to reside a resistance to move beyond mere acquaintance. And perhaps this was appropriate, for it is impossible to truly know a large number of people throughout one’s life. The polite civility of fostering various acquaintances in our lives has its necessary place and purposes. With regards to this, it would seem obvious that there has been a serious decline in the desire and capacity for people to engage in even this kind of a common, meager relationship, a circumstance symptomatic of deeper issues in our lonely, broken society. Perhaps we live in what might be regarded as among the loneliest societies to have ever existed.

Tilting my head upwards, I look up at the stars, at shimmering specks scattered throughout the dark immensities of space. We live in a gorgeous world, but it’s also a fallen world and as long as we live in it, loneliness, in varying degrees, will afflict us.

As a Christian, I would think that my experience of loneliness would differ from that of a non-Christian because God—by His grace—has reconciled me to Himself. The non-Christian either has no hope or hopes in that which cannot save (for only Christ can save), and often, if not always, can sense the reality of his separation, his estrangement from God. In light of this, perhaps the unregenerate man feels a more intense sense of loneliness than that of a Christian; having said that, I’ve known Christians, including myself, who have experienced seasons of severe loneliness. Besides one’s state before God, many variables, including neuro-chemical imbalances, genetics, personality, upbringing, and circumstances, could be named as factors holding profound influence regarding the experience, in kind and intensity, of loneliness.

My eyes move from the stars to the road that I walk, a posture I sometimes find myself in when deep in thought. My pastor, who lives in the same neighborhood, has with affectionate humor, made mention of this fact.

From somewhere out in the vast vacancies of night, disturbing my thoughts, the single sharp cry of some nocturnal creature reaches my ears, echoing faintly before dissipating, gone. The phenomenon of an echo, by its very nature, sounds lonely because it needs a hollow space, room to resonate, and the voice it sends is the answer it receives.

With regard to my particular situation, when I’m lonely, it often feels kind of like hunger, which is actually a form of pain, only deeper than a mere physical craving. It really does feel like that. There’s a kind of hollowness to loneliness, an inner crying out like the rumbling of an empty stomach.

For most of us there is a capacity and desire for community, a hunger to love others and be loved in return, to be known, respected, appreciated and involved within a community; there’s also a desire to profoundly love and give of oneself, to unite with another in marriage, to know one particular person deeply, intimately. When this desire is not fulfilled or the experience of it broken in some way, sometimes loneliness can be the result, and even depression.

I think there’s also a kind of fear in loneliness, born out of doubt, hopelessness, or at least the slow erosion of hope in one’s mind. Buried fears often rise to the surface amidst times of loneliness. Certain hopes and pains repressed under protective layers break through, giving voice to their existence.

Also, there’s a subtle warping of perspective that loneliness can engender, emotionally casting the world in bleak hues and gray colors of despair. If continuously indulged in, it will become more and more difficult to discern between truth and fantasy. Perhaps this kind of situation could be more accurately described as when loneliness moves over, at least partially, into the realm of self-pity.

Moving around my block, I pass by homes, here and there, occupied by friends from church. (A large number of people in our neighborhood attend the same church.) A couple of them, both talented writers, I would regard as close friends. A brief sound of casual, hearty laughter emerges from a window glowing in orange-yellow relief against the dark silhouette of a home.

Some of us might think that friendship or marriage will banish loneliness, but in reality, even if one is a Christian, the loneliness will probably, to some degree, persist; it may even occur at a deeper level than before. One thinks of the loneliness of Christ. Despite His perfect intimacy with the Father, Christ must have felt while He walked on earth deeply lonely at times. He was misunderstood, maligned, mocked and rejected; even His closest friends deserted Him when He needed them. Even the Father, though not failing Him, in some real sense forsook Him at the point of His greatest need—at the very moment when His suffering and loneliness seemed to have reached its apex. We indeed have a Savior who can sympathize with our limitations, our frailties, our weakness, our pain, our loneliness, the various difficulties associated with living in a dark, fallen, fractured world.

Against a vast, starry backdrop, the shadow-touched moon is out tonight, adrift in a sea of darkness, glowing in profound isolation, cold and alone.

Most of us, to some extent, have probably felt during moments and different times in our lives the way the moon is described here. There may have been a time, perhaps as a child, when you were happier, felt more at home, but now at times feel lonely. I don’t know your situation, whether or not you struggle strenuously with loneliness, but I do know that the present state of earth isn’t meant to be our home. There was a time when mankind was at home in this world, a particular garden comes to mind, and for Christians, there will be a time when we will be at home on earth again.