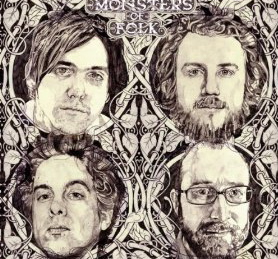 In the Fall of 2009, I found myself at a stalemate with my collection of music. Nothing in my 9 gigs of iTunes was calling out to me and I was not making an effort to reach out to it. This wasn’t junk pop, mind you, these were bands in which I had invested much time, money, and emotional energy, bands that spoke to my brokenness and the things that I was grieving as losses in my life. It’s not even that they didn’t still sound good. I had just explored the depths of the lyrics and music to most of these bands as far as I could go and I had nothing left.

To the best of my ability I seek to purchase music that I can pull out in 20 years and still be drawn into the message that is being conveyed. This is why I believe U2 is the greatest band over the last 30 years. Their music doesn’t age.

Enter Monsters of Folk. Their music doesn’t just grab your attention—it demands that you pay close attention. The music matches the message as well as any band I have ever listened to. “His Master’s Voice” is one of those songs (track #15 on Monsters of Folk, 2009). Sung with a melancholy that holds true to the message, the listener cannot help but be transfixed.

Mohammed rolling dice with Christ at twilight
And they hear their master’s voice
…they run to do their chores
At Master’s calling
Their job tonight: rewrite the Bible
For a whole new generation of non-believers

The pastor screams out to the crowd:
“There’s evil that must be put down!”
And it touches the soldier boy
…he heeds his master’s voice…
His life is calling.

Sweet soldier boy…the speaker is bleeding…
He hears his master’s voice
…do you hear your master’s voice?
Calling…like the lady siren’s call.

Sweet soldier quiet, just staring at the ceiling…
And he hears his master’s voice
…he hears the call to war…
The siren’s singing

Out on the line, there’s something that strikes his side
And he sees his inner child
…he hears his mother’s voice…
Softly calling.

Spirit soldier’s mother hovers
…she holds up a paper cup…
And the sound of life and love fills her ear.

You’re only gonna hear what you want to hear…
Do you hear your master’s voice now?

Perhaps the major issue is raised in the first verse. “Their job tonight: Rewrite the Bible / For a whole new generation of non-believers.” The question being asked is this: Is the Bible relevant to generations of un-churched and those who are on the fringes of our churches? Is the Bible irrelevant, or the way that the Bible is perceived, or being taught, in circles that are described in “His Master’s Voice?”

For sure, disillusionment is being communicated. The contrast between the screaming pastor’s influence on the boy and that of his mother’s is glaring. At the end of the day, when death comes to our door, as it does to this boy, will we hold on to our anger and the anger of others or will we long to be with the one that loves us best? The mother here is “softy calling,” the way the gospel calls to us, not with anger and resentment, but with gentleness and respect for our dignity and the love of the one whose image we bear, God our Father.

As Christians, when we listen to “His Master’s Voice,” we should be willing to point out truth where it is communicated. We should also be willing to think critically and admit that the church bears some of the responsibility for the way in which she is viewed today. For as often as we have been the salt of earth, we have nonetheless managed to be acidic in our approach to who is right and who is wrong.