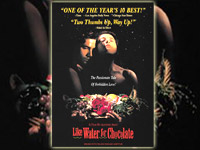 In Mexico hot chocolate is made by adding cocoa to water that has been brought to a boil; the title of the film Like Water For Chocolate alludes to this fact and to the common use of the expression as a metaphor for describing a state of sexual arousal. The film sticks doggedly to its theme, tracing the desire of sad Tita de la Garza (Lumi Cavazos) for Pedro Muzquiz (Marco Leonardi), a handsome neighbor but an unattainable lover due to a tradition, rigidly insisted upon by Tita’s domineering mother, that the youngest daughter must never marry, instead taking care of her mother until the day she dies. Tita, who has become a master chef under the tutelage of their Indian cook Nacha, finds solace only in her cooking, and seeks to influence her life and the lives of those around her by the use of this extraordinary, magical art.

Set on a ranch in Northern Mexico just south of the Rio Grande and taking place from 1910 until 1934, a time of revolution and upheaval in Mexico, the film is at times a delightful, comic portrayal of Tita’s life and art. Though the revolution touches the lives of the family at two important points, this film has little to do with politics or Latin American social upheavals. It has everything to do with freedom, repression, desire, jealousy, art, and most of all romantic, sexual love. The combination of these things in the life of waifish, silent Tita creates a magic that causes her meals not to be simply gourmet feasts but to have an effect on all those who eat them that corresponds to what Tita was feeling when she prepared them. So, for example, the cake that Tita is forced to prepare for the wedding of Pedro and her oldest sister Rosaura causes the entire wedding party to weep uncontrollably since Tita’s tears were mixed into the batter. Later, when Pedro has aroused her passion once again by bringing her a dozen roses, she prepares a rose petal sauce over quail that so touches off her sister Gertrudis’s urges that she must rush out to the bathhouse to take a cold shower. This is not enough to cool her ardor, however, and her flames of passion turn into literal flames, burning down the bathhouse and causing her to flee into the arms of a stray soldier who passes by and promptly carries her off to the revolution. Not the stuff of heavy melodrama, this.

And yet the film is serious in its exploration of the themes it pursues. Using the so-called “magic realism” made famous in the novels of Nobel prize winner Gabriel Garcia Marquez and other Latin American authors like Isabel Allende, author Laura Esquivel and her husband director Alfonso Arau have produced a film that portrays sexual love as perhaps the one unstoppable force in the universe. When the repressive Mama Elena, played masterfully by the best known actor in the film, Regina Torne, attempts to thwart Tita’s desire, she is killed by revolutionaries. When her jealous older sister stands in her way, Tita prepares her meals with such anger and bitterness that they give her sister a gut-wrenching indigestion, and she eventually dies of her bitterness, having become the repressive mirror-image of her mother. Even at the end of the film, when Tita and Pedro are finally able to indulge their passion, they are so inflamed by the sensuous wedding cake Tita has prepared for her niece that the two lovers become “like water for chocolate,” their bodies spontaneously igniting and burning the house to the ground. The narrator of the story, Tita’s niece Esperanza, finds nothing in the ashes but Tita’s cook book, and saves it, declaring that she will hand it down from one generation to the next, allowing Tita to go on living as long as her recipes are prepared.

As romantic and appealing as it appears, Tita and Pedro’s love is really in the end a lie. There is a truth of sorts here: sexual love is one of the most powerful forces in the universe, but it is only a love, sexual and otherwise, that is practiced within the bounds of divine, covenantal loyalty that conquers the bitterness and repression that others force upon us. Only a love that is “faithful in the little things”— the little acts of mercy and of kindness, of patience and of grace— will build a passion fiery enough to set the world aflame, burning away injustice and wrong, and putting in their place a love that reflects the only true source of magic that there is in this world: the relationship Deity enjoys with His people.