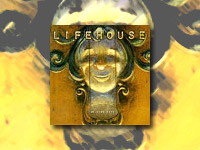 The seventeenth century apologist Blaise Pascal wisely noted that “There are only three sorts of people: those who have found God and serve him; those who are busy seeking him and have not found him; those who live without either seeking or finding him. The first are reasonable and happy, the last are foolish and unhappy, those in the middle are unhappy and reasonable.” It is of the middle group that the alternative rock band Lifehouse sings.

No Name Face, Halloween 2000, is the provocative debut album of the Malibu-based group. Its release date is telling, as the album deals with many of the demons that haunt young adults. “This record deals a lot with self-discovery and breaking out of whatever your parents or your boss or whoever thinks you should be. It’s about trying to find out for yourself who you’re supposed to be; your purpose, your destiny in the world,” states Jason Wade, Lifehouse singer-songwriter-guitarist.

The single “Hanging By A Moment” has received increasing radio airtime climbing the charts to #1 in its first fourteen weeks. One reviewer suggests that the group has the depth and resonance of Pearl Jam coupled with the light hearted rock style of Third Eye Blind. But comparisons do the group no justice. It is Lifehouse’s combination of musical quality, emotional transparency, and substantive content that sets it apart.

The cumulative impact of this record expresses the heart questions of security and significance that frame our longings for love and meaning. Without dogmatic assertions, Lifehouse points its audience to God. Rarely in today’s rock world does one find such honesty and hope combined. Here is authenticity without the typical nihilism. “I don’t tend to write about shallow things. I don’t just want to connect to people and relate to them for its own sake,” Wade explains. “I don’t want them—or me—to be miserable and lonely and feeling there are no answers. I want to say something hopeful, that maybe we can figure out some of this stuff.”

A high school sophomore, Anna Kilgore says, “I really appreciate how Jason Wade is struggling with the deep questions. He’s not afraid to admit he doesn’t have all the answers. In ‘Somebody Else’s Song,’ he talks about feeling like somebody else and wondering where the thoughts in your head come from —a very universal struggle but not one that many people want to admit.”

Wade’s early elementary years were spent on the mission field in Hong Kong with charismatic parents involved in a variety of ministries to the Chinese poor. By twelve, he found himself back in Portland, Oregon, with divorced parents. He admits, “My parents had lots of issues. But they wouldn’t allow me to see the problems in their relationship. Our family was always peaceful; there was never any fighting or anything. We looked perfectly happy from the outside. It was like Pleasantville. The worst part was that I couldn’t acknowledge anything was wrong, so I couldn’t do anything about it. I felt completely powerless.” He moved with his mother to Seattle and there discovered his musical creativity as a way of coping with his emotional pain and spiritual doubts. “I started questioning my spirituality. I started wondering if God was real and if so, could He help me through all these terrible feelings? And if not, then what? That’s what my earliest songs were about—they were me crying out, trying to figure out what I believed.”

This doubt is screaming in my face in this familiar place, sheltered and concealed
And if this night won’t let me rest don’t let me second guess what I know to be real
Put away all I know for tonight and maybe I just might learn to let it go
Take my security from me and maybe finally I won’t have to know everything
I am falling into grace to the unknown where you are
And faith makes everyone scared
It’s the unknown the don’t-know that keeps me hanging on to you

When Wade was fifteen, his mother moved again, this time to Malibu, where she pursued a graduate degree in psychology at Pepperdine University. Few things are more difficult than having one’s parent’s divorce and subsequently moving twice in high school. Wade poured himself into his music. He hooked up with budding bassist Sergio Andrade, whom he met at the Malibu Vineyard church. The two strangers became fast friends. The chemistry of the group is grounded in this now five year long relationship. By Wade’s seventeenth birthday, Lifehouse had become a local hit. Starting with audiences comprising mainly his church youth group, the band was soon playing for audiences at Pepperdine University and the University of Southern California.

The group is cautious not to be identified as a “Christian” group. The album was produced by Ron Aniello, a member at the Malibu Vineyard church, but mixed by Brendan O’Brian, who has mixed albums for U2, Rage Against the Machine, Stone Temple Pilots, and Pearl Jam. Wade allows for ambiguity to remain in the meaning of his songs. “That’s the great thing about a song—a lyric may mean something totally different for someone else than it does for me and still be just as valid.” For many the songs connect at the emotional level. “I can relate to the songs Lifehouse sings, they help me figure out my inner self and help me to discover who I really am,” says high school freshman Meredith Hubble.

Wherever the album meets its listeners, its message points in a definite direction. The romantic melodies point beyond human love to that which is Love itself.

The search for security and significance is rarely without scars. For once the prodigal had his “pig-sty moment,” he still faced a long walk home. He could have easily penned the lines:

Desperate for changing
Starving for truth
Closer to where I started chasing after you.