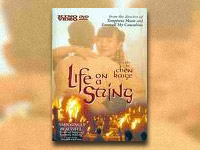 Life On a String, a film by Chen Kaige, the first contemporary Chinese director to live and study film in the West, ironically focuses its attention on the need for a revival of the life, hope, and beauty that Eastern, mystical spirituality imparts to the individual.

The story of an old, blind holy man who wanders through the countryside, singing songs, playing his sanxian (a musical instrument with three strings, oddly translated banjo in the subtitles), and telling stories to villagers is a fable of the importance of faith, hope and love to the human spirit. The story centers on the fact that the old man, simply called “the saint” or “master” throughout the film, is about to break his thousandth string, after which he may take a secret formula hidden in the sanxian to a pharmacist who will give him a magic potion to restore his sight. He has a blind young apprentice named Shitou who falls in love with a young village girl named Lanxiu. After he breaks his thousandth string and then discovers that his paper containing the magic formula is blank, the old man discovers that to have lived a long life helping people by gladdening their hearts through his music and storytelling is reward enough, that, as he sings near the end of the movie, “All came to me and said, you are not blind, you are not deaf.”

In contrast to Ju Dou, Life on a String is full of nature: the old man and Shitou wander through a beautiful, but desolate Mongolia, with mountains, rocks and a rushing river providing some of the strongest images in the film. The characters, with the exception of the old man, are somewhat wooden, and while the acting is passable, it is not spectacular. But again this film is rescued by its depth of philosophical speculation in the midst of an engaging story. The viewer is kept guessing the entire movie about the relationship of Shitou to the old man, and to Lanxiu, and one of the strengths of the film is its view that wisdom does not flow only from the old to the young. Lanxiu and Shitou end up having some lessons to teach the old man, too. The clear and unashamed portrayal of spirituality and magic, reminiscent of the South American novelists Gabriel Garcia Marquez and Isabel Allende, and the popular recent Mexican film Like Water for Chocolate is refreshing, even if it is animistic in its focus.

I once visited Berlin during the cold war and was saddened by the similarities I saw in the faces of the two Berlins. The realization that modernity had given us the choice of two equally pathetic alternatives shocked me: a despondency bred by the opulent materialism of a spiritually devoid West, or a despondency bred by the depressed materialism of a spiritually devoid East. The spirituality and hope of these two films is at least a welcome alternative to these.