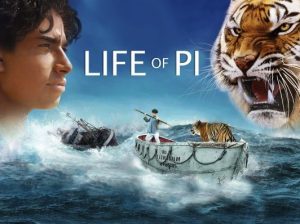 A Theology of the Imagination
Who is God?  Ask a secular friend and his/her answers may surprise you. Yes, it is possible to be secular and a deist. According to Christian Smith, Director of the Center for the Study of Religion and Society at Notre Dame, most young Americans are. They see God as a mix of divine butler and cosmic therapist: a spirit who “grants you anything you want, but not anything bad” and “is there to guide us, for someone to talk to and help us through our problems.”

Ask the question, “How do you know who God is?” and the answers may be even more surprising. Most are qualified with an “I feel,” “I think,” or “I believe.” It seems we are as uncomfortable with a god who can be known as we are with a god who isn’t content to stay in the shadows. In the words of poet Wallace Stevens, “We say God and the Imagination are one…”

Ang Lee’s beautiful film, Life of Pi, is ostensibly a film about God. Early in the film, when Pi meets the writer who will chronicle his adventure, he says he wants to tell him a story that will “make you believe in God.” In the end we hear, not one, but two stories: one is a beautiful, imaginative adventure, the other a grim tale of survival.

The title of the film Life of Pi is a little misleading in that we are given only a brief introductory sketch of his life. We learn that Pi was named after an elegant French swimming pool—the Piscine Molitor in Paris, was raised in a zoo by a rationalistic father and Hindu mother, and became a convert first to Catholicism and then to Islam without ceasing to be Hindu.

Then comes the adventure. While sailing with his family and their zoo animals from India to Canada, the ship sinks in a storm, and young Pi is left adrift in the Pacific in a lifeboat, with a zebra, a hyena, an orangutan, and a Bengal tiger, named Richard Parker. (Yes, there’s a story behind the name.) The other animals quickly become food for Richard Parker, leaving him and Pi as the two players in tense and beautiful drama.

Life of Pi won a much-deserved Oscar earlier this year for Claudio Miranda’s realization of Yann Martel’s novel. Through his visual magic we experience the fury of a storm at sea, the ghostly phosphorescence of sea creatures in a nighttime ballet, a swarm of flying fish pursued by tuna and an island more mysterious than anything Jules Verne ever dreamed of. But most of all we experience what it might feel like to be adrift in a tiny lifeboat with a large Bengal tiger. It’s this story—not the shipwreck, but Pi’s face to face struggle with Richard Parker—that is supposed to make us believe in God.

I’ve watched the film three times so far, and each time I’ve wrestled with what seems to me to be a very obvious question: how is this story supposed to make me believe in God? God makes no appearance in the tale. Although it is filled with wonders, nothing occurs that might be considered a miracle. Instead we witness Pi’s existential crisis, his journey with himself and within himself, and he offers this to inspire faith.

John Calvin begins his Institutes of the Christian Religion with a statement that both echoes and contradicts Pi’s story:

Our wisdom, insofar as it ought to be deemed true and solid wisdom, consists of two parts: the knowledge of God and of ourselves. But as these are connected together by many ties, it is not easy to determine which of the two precedes and gives birth to the other.

Should the knowledge of myself lead to a knowledge of God? Sure, but not in the way we often think of self-knowledge. The Pis of the world seek to discover who they are through their experiences and their responses to them. Having thus defined themselves, they then imagine a god who complements them, a god made in their image. Calvin’s approach couldn’t be more at odd with Pi’s: I only understand myself truly as I understand myself as I stand before and in relation to God in whose image I am made.

Of course, there is another version of Pi’s story. After drifting for months, Pi and Richard Parker make landfall in Mexico, the tiger disappears into the jungle, and Pi is rescued. But when he tells the story we’ve seen to the insurance agents investigating the shipwreck, they are incredulous, so he tells them another story. When the ship sank, Pi was joined in the lifeboat by his mother, an injured sailor and the ship’s cook. After the sailor died due to his injuries, the cook—“a disgusting man”—used him first for fish bait, then for food. When Pi’s mother objected, he killed her, and the next day Pi killed the cook.

After telling this story, Pi asks the most important question in the film: not “Which story is true?” but “Which do you prefer?” Allow me to offer two postscripts to Life of Pi. In the last stanza of his poem “Creed” Steve Turner writes,

Our imagination can produce very beautiful stories about gods. Through the years I’ve enjoyed many of them, especially in fantasy literature. Reading them can sometimes even be good preparation for getting to know God, sparking our divine curiosity as it were. But the God who is there is not the product of our imagination. He is who he is; the fear of the Lord begins with acknowledging this. And as C. S. Lewis noted, merely enjoying such tales isn’t enough.

We want something else which can hardly be put into words—to be united with the beauty we see, to pass into it, to receive it into ourselves, to bathe in it, to become part of it. That is why we have peopled air and earth and water with gods and goddesses, nymphs and elves.

Pi’s quest for god is a beautiful tale, but like any story rooted only in imagination it fails to satisfy. Only a real God will do, one who speaks, acts and is willing and able to present us before His beauty without blemish and with great joy.

Please, watch Life of Pi with some friends, then talk about the film, about who God is, and see where the conversation takes you.

1. What does this movie leave you thinking about? What images from the film linger most vividly in your mind? 2. Pi presents himself as a Hindu/Christian/Muslim. Despite the criticism he receives from his family for his “conversions” Pi himself is obviously delighted with all his religions and sees no problem in holding to all of them at the same time. What reasons does he offer in the film for doing so? He grew up Hindu; what attracts him to Christianity and to Islam? 3. Is it possible to be a Hindu/Christian/Muslim? If in your opinion it is impossible, what makes it so, other than the displeasure of people who practice only one of them? 4. One of the first conflicts in the film is between Pi and his father over Richard Parker. His father insists that the tiger is a wild animal that will kill him without remorse. But Pi insists that when he looked into the tiger’s eyes, he saw “his soul.” What, in your opinion, did Pi see? Is his response more than just a classic case of anthropomorphism? 5. There are clear parallels in the two stories Pi tells between animals and people. The zebra corresponds to the injured sailor, the hyena to the cook, the orangutan to his mother and Richard Parker to Pi himself. Discuss the significance of these ties, especially the tie between Pi and Richard Parker. 6. Which of Pi’s stories do you prefer and why? 7. If a friend of yours were to ask you, “Who is God?” how might you answer? How might you answer his/her follow up question, “How do you know?” What are the concerns—theological and personal—that shape your answers? 8. In my review I state that fantasy tales can sometimes spark “divine curiosity.” Have you ever found this to be true in your experience? If so, which stories were helpful in striking the spark? 9. If you were privileged enough to watch the film with Yann Martell, author of the novel on which the film is based, what questions would you have for him?