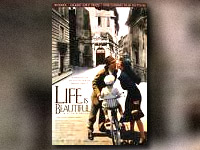 War was raging in Europe as Guido was becoming a man. Through his hilarious antics and charming wit you are drawn to him as he falls in love with Dora, a beautiful young Italian woman. They marry and have a son, Giosue. When Giosue is four, the Nazis capture the family and take them to a concentration camp for Jews. Guido and Giosue are separated from Dora, and Guido must think and act quickly in order to save his son—creating a film unlike any other holocaust era film you’ll ever see.

Guido gave his son the gift of never knowing the true extent of the evil he was surrounded by. He framed his son’s world with beauty, fun, laughter, and tenderness, even though their lives were hanging in the balance every minute. Beautiful!

I have watched this film a couple of times now, and I have read the reviews that call this film disrespectful to the victims of the holocaust. I have also read that this film won the Jerusalem Jewish Experience Award—a high honor given by the Jewish people.

And I do recognize honor in what I saw. To offer an explanation that shields the horrors of fascism from my little boy is something I would do every day of the year if I had to. This film, to me, lives up to its title. Guido offers a life that is beautiful to his son, even though their world is a very fallen and hard place. And I am struck by his determination to keep the game going, even though he is exhausted and oppressed. It is in this perseverance that Guido reflects Jesus’ words to me, “Greater love has no man than this, that he lay down his life for his friends (Jn. 15:13).” Guido did this for Giosue from the moment his son asked why Jews and Dogs couldn’t go into that shop. This is truly beautiful.

1. Life is Beautiful was nominated for seven Academy Awards. It won three: Best Actor (Roberto Benigni), Best Foreign Language Film, and Best Dramatic Score. It also more or less swept the Italian equivalent of the Oscars. Also, it fared rather well at the Cannes Film Festival. Soon, we’ll discuss the film’s themes and content, but as we begin this discussion, let’s start by examining some of the elements at work that have won it such esteem worldwide. 2. What about this film was done well? Were there any characters you thought stood out as excellent? If so, who? 3. Act 1 of this film is very different from Act 2. Some have said this makes the film a bit schizophrenic. What, do you think, is the reason Benigni constructs the film this way? Do you think the two distinct acts hurt or help the film? 4. This film calls itself a fable. What is a fable? What makes this film one? In light of this, how should it affect our interpretation of the grim subject matter? The narrator of this film begins by saying, “This is a simple story, but not an easy one to tell. Like a fable, there is sorrow. And like a fable, it is full of wonder and happiness.” He ends by saying, “This is my story. This is the sacrifice my father made. This was his gift to me.” Who was the narrator, and how does his identity help you understand the film? How does this help you better understand the purpose of Act 1? 5. What is the central theme of this movie? One critic said it was “that people will do whatever is necessary to protect what is most dear to them.” What’s your take? Do you admire Guido’s zeal for life in Act 1 of this film? Have you ever known someone like him? 6. How did Guido approach his work as a waiter? Was he good at what he did? How have you approached some of the more menial work you have done in life? 7. It is a terribly sad thing that movies like this are based on true events. There was a time less than a hundred years ago when respected scientists propagated the idea that the Aryan race was superior to all other races. When Guido pretends to be an inspector from Rome, he discovers he is supposed to give children a speech on why Aryans are superior. And while his speech is comedic, there is a horrible unease in knowing children were taught these sorts of things. 8. How is a belief in a superior race being taught today? Is it being taught to children? If so, how? 9. What was the evolution of Guido’s relationship with his German, riddle-loving friend, Dr. Lessing? What did this tell you about the realities of the persecution of the Italian Jews? 10. What do you know about the holocaust? Who were killed? How many? Why were they killed? One movie critic described the holocaust as an event that goes beyond human reason or understanding. Do you agree? 11. In this film, Guido says a lot of things that are not true. Is it ever okay not to tell the truth? If not, why? If so, when? Are there any examples of this happening in Scripture? 12. This film has come under attack for taking the holocaust too lightly. Movie critic Charles Taylor of Salon said, “That Benigni does not treat the extermination of Italian Jews as a laughing matter is beside the point. The point, I think, is the sheer callous inappropriateness of comedy existing within the physical reality of the camps—even the imagined reality of a movie.” Do you agree with this evaluation? Why or why not? 14. If you think Benigni crosses some boundaries of what is appropriate, where does this occur? 15. Why is this film entitled Life is Beautiful? 16. Does this film challenge how you are going to live your life? If so, in what ways? 17. When Giosue tells us that his father’s sacrifice was his gift to him, what do you think he is getting at? Why was it a gift? What did that gift look like? 18. God forbid you should ever face what this film depicts. But if you were in Guido’s shoes, what do you think your priorities would be? 19. Was Guido a good father? Was he a good husband? Was there anything you saw in him that you would want to emulate? 20. What is common grace and how is it shown through this film? (hint: common grace is grace the Lord gives to all creation—like rain for crops and the sweetness of flowers... and notably, in His restraint of evil. God does not allow evil to have full reign.) How does this film illustrate God’s restraint of evil in the world? 21. If God’s restraint of evil means that he doesn’t allow us to really see all there is to see concerning the fallenness of our world, then are we like Giosue and is God like Guido? If not, why? If so, how? 22. In a nutshell, how is the Gospel message of salvation to the helpless presented? 23. How might this film be used as a point of contact for discussions with non-believers? 24. How is this film a window of insight into how a Christian should live, think and act?