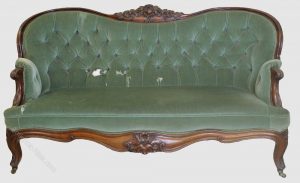 Camelback couch needs a new look
From the moment it was hauled through the front door, I hated that pine-green naugahyde couch. It stank like cat pee and the surface stuck to your bare skin. But is was something to sit on, and it was a free hand-me-down that came during our magical, poverty-stricken third year of marriage. By year sixteen we’d owned and offed many free used couches. They weren’t to my taste, but still we were thankful for remodeling projects that made our friends’ possessions obsolete, like the perfectly useable harvest-gold refrigerator from friends who upgraded to the fashionable black-appliance era. But the first couch we ever owned that I totally loved was a surprise gift.

The moment I spied it at a neighbor’s garage sale I wanted it. From my front porch I could see their driveway lined with tables of clothing, sports equipment, old dishes and an assortment of book cases and wooden chairs that smelled of must. I walked down with the dog – he was a handy excuse to meander past anything of interest. There, among worn linens and old picture frames, was the antique couch I dreamed of owning. It was a camel-back sofa upholstered in rose-y brocade with ornate wood carvings along the back that met in the middle of the hump in a delicate rosette. Graceful Queen-Anne legs supported upholstered arms that rolled comfortably over the side. Exactly what I wanted back in the day of wine-colored carpets and country-blue wallpaper. I peeked at the price. One hundred dollars was more than I could afford. Every day of the sale I walked past to see if the couch was still there and whether the price had been lowered. I’m no bargainer but I screwed up courage to ask if they would take fifty dollars. The owner looked as if I had insulted his mother. “NO! This belonged to our grandmother. It’s a gen-u-ine antique.” I sighed and walked home determined to put it out of my mind.

The last evening of the sale coincided with our small group Bible study. Later as we prayed together I confessed I had a problem with covetousness. I admitted how much I wanted that couch, but was determined to be content with what we had. When the study was over, as usual, I disappeared into the kitchen to prepare our treat which was more complex than my normal throw brownies on a plate. It was homemade gingerbread cake with lemon curd and whipped cream. As I refilled the coffee pot and prepared dessert, several others joined, intending to keep me in the kitchen a little longer.

Meanwhile, noise and laughter from the living room rose to a peak and suddenly hushed signaling the kind of quiet that warns mothers the kids are up to shenanigans again.

Finally we carried in the cake and then I understood what the commotion was about. After I left for the kitchen there had been a whispered conference. Everyone threw cash down and four of the men ran down to the sale, paid for the couch, hauled it back, horsed it through the front door and were now lounging on it. “It’s yours,” they said with big grins.

Over the years it got reupholstered when I left country décor behind and it adorned our living room until the day a dear friend weighing something over 300 pounds stopped by, lowered his weary body onto the cushions and I heard a crrraaackkk. I hid my dismay and after he left I turned it over. Sure enough there was a fresh break along the back frame. It bravely hung together for many more years until one day I woke up and said, I’m done with antiques and purchased our first couch ever – a leather sofa on sale at HOM. But even the new leather smell and bouncy cushions couldn’t diminish the sweet memory of that “antique” gift and the generosity of friends.

Every Christmas we celebrate by giving and receiving gifts. A smarter, better writer could seamlessly lead you to Jesus who is, of course, the greatest gift we’ve ever known. Through him a lot of grace has been horsed in through our doors, surprising us with what we could never afford. I remember the awe of that spontaneous gift when friends threw down the cash for something I couldn’t have and didn’t deserve. But I can imagine Jesus sitting on that couch, and over my objections inviting me to shut up and sit down. Or as my husband would say, just say thank you. And so we do. Glory to God forever and ever.

(This essay first appeared in Letters From the House Between #4 2016.)