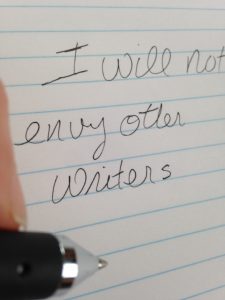 In 1873 a twenty-three-year-old French woman died of tuberculosis. It was a common disease back then and many died from this incurable pulmonary wasting disease. Therese was a devout Christian with an uncommon hunger to serve God without reservation; she was only fourteen when she joined a religious order. It was years after her death when she was named St. Therese of Lisieu and became known for a little treatise she wrote called wherever she went it made her feel sad not to be able to do great things for God (and for others) so that she could be worthy of his love. One day she was especially touched by Proverbs 9:16 “He that is a little one, let him turn to me.” (from the Douay-Rheims translation) That verse changed her life and from then on she learned to accept herself as she was. Small. Unknown. Of little account. Broken and in need of God’s love and mercy. Eventually her life became known as “The Little Way of  St. Therese” and it has spoken truth to many of us.

Most of us, well, me, anyway, spend time examining our interests whatever they are, turning them round and round on the lathe of our brains. When I scrutinize my life, I would like it to lead to self-knowledge and not self-absorption which stinks of conceit.

Lately, out of my soul’s worm holes an appalling attitude has wriggled to the surface and I should have confessed it long ago. Have you noticed it’s easy to admit to things we think are insignificant or common? Safe because, hey, haven’t we all cursed the old lady, of which I am now one, in line ahead of us who empties her purse and for twenty minutes counts out sixty-two pennies? I mean, C’mon! Sure our impatience is bad, but we think it’s not too big a deal.

My secret sin is this: I envy everyone’s writing. Yes. I am jealous of pretty much everyone. You are no exception, unless I think I’m better than you. Pride. Envy. Jealousy. Arrogance.

“Love does not envy” (I Corinthians 13:4). Blah, blah, blah. It’s easy to trivialize that familiar verse. But Jesus words are sharp and painful: “For from within, out of men’s hearts come evil thoughts, sexual immorality, theft, murder, adultery, greed, malice, deceit, lewdness, envy, slander, arrogance and folly.” (Mark 7: 21, 22) Did he miss ANYthing? There doesn’t seem to be a sliding scale of badness. Just ALL BAD and envy right in with all the rest. Yes. According to the dictionary, envy and jealousy are nearly the same. It is “a feeling of discontented or resentful longing aroused by someone else’s possessions, abilities, gifts, qualities or luck. Wanting a desirable attribute that belongs to someone else.” This is contemptible, but I’m determined to own it.

I am jealous of:
… my dear friend Steve Garber, also a member of Ransom’s Board of Directors. To say nothing of the fine books he has written – he somehow manages to get on Facebook and post frequent, insightful reflections on the connection between knowing and doing – filled with compassion for people and played out in many places in the world accompanied by photos of great beauty. New York City skyline. Colorado mountains. Sunsets over the Pacific. How does he do it? I want to write with the same passion and be as prolific. I want the beautiful places and all the “likes.”

… of the acclaim my friend, Nancy Nordenson, has received for her good work in writing Finding Livelihood with Kalos Press. I envy that Luci Shaw has endorsed her book.

… for the absolute brilliance of Maria Popova’s “Brain Pickings” – of her incredible ability to pull from the work of others and distill it into beautiful, wise words. She feeds the human spirit by pointing to great writers, thinkers and philosophers. She’s only 30, for pity sake!

I envy Anne Lamott for her funny, creative memoirs – her phrases and sentences capture everything I wish I could have said myself.

I’m jealous of my soul-mate, Andi, who I’m sure, despite her busyness is writing another wonderful book on loving others in the everyday- ness of where we are called to be.

… of the tightly reasoned, compelling logic of N.T. Wright. However hard I try I could never write with his elegance.

… J.K. Rowling, who is a billionaire, (a billionaire!!) and has now begun another best-selling series.

Ridding my heart of this poison and being content with what God has given me to do means acknowledging that all these writers are doing what God has called them to do (not me). So between myself and God, and because of Sister Therese’s humble ways, I’ve been thinking of my life as “Margie’s Little Way.” You shouldn’t be laughing. I don’t mean in the least that others should follow me. It’s more about accepting who I am without owning a long list of accomplishments of where I’ve been and what I’ve done. A loaf of bread fresh from the oven. Silent prayers for people I love. Preparing a room for a guest. Spreading seeds for the cardinals. Adjusting commas in a sentence. Watching Futurama with my granddaughter. These things are barely discernable on our culture’s meter of What- is-Important. Traveling in this Little Way is a journey filled with ordinary acts and small kindnesses that any Old Joe with a stick could do. The difference between me and the rest of the Old Joes is that [this] not [that] is what God has called me to do, and when I do it, I am blessed and so are others.

In the end, you could rightly ask, why on earth do you need to make this public at all? Just repent and shut up about it. Well, I confess for a couple reasons. First, it’s a good spiritual discipline, we’re urged to confess as in “confess your sins to one another.” It’s the will of God. Second, although sinful weaknesses can threaten to break us apart, they can also become a conduit for a mystery of God. Strangely, he is pleased to work through our weaknesses. So beneath my layers of bluff and smoke-blowing, my repentance and confession becomes a path for God’s strength to enter with forgiveness and love. So, as a “little one” I turn to him with confidence that he will sort me out. I remind you of this in case you, too, need to be sorted out.

A Shady Crevice
Christina Rossetti was another 19th century woman with a deep Christian faith. Overshadowed by her famous Pre-Raphaelite brothers, she remained single all her life, lived with chronic illness and cared for her aging parents until their death.
She also wrote some of the finest poetry of that century with topics that spanned across creation and human relationships. She seemed keenly aware of her sacrifice and calling in life and once in a poignant letter to her brother wrote: “Beautiful, delightful, noble, memorable, as is the world you  and yours frequent, I yet am well content in my shady crevice—which crevice enjoys the unique advantage of being to my certain knowledge the place assigned me.” Most often her poems reflected her passion for and love of Christ.

She had no way of knowing that one of her poems would be set  to music and become a beloved Christmas carol we sing to this day. She was another example of a person who walked a Little Way – one who knew that to be content required knowing that she was called to [this] and not [that].

And inally, I wanted to include a short quote from each of the writers I mentioned earlier, writers I admire, but have, yes, sometimes envied for one reason or another. And there are so many more….

Steven Garber
“We know in our deepest places how hard it is to keep our eyes open to the complexity of the broken world around us, to keep feeling the pains of a world that is not the way it is supposed to be and, knowing the difficulty, choosing to engage it rather than being numbed by it.”

N.T. Wright
“The whole point of the kingdom of God is Jesus has come to bear witness to the true truth, which is nonviolent. When God wants to take charge of the world, he doesn’t send in the tanks. He sends in the poor and the meek.”

Andi Ashworth
“In small and large ways, when we create beauty–in our environment, relationships, music, cooking, poetry, and celebrations–we push back the effects of the Fall and express our hope for the new heaven and the new earth that God promises.”

Nancy Nordenson
“Your eyes may not see beyond where you are now, and that must sometimes be enough.”

Maria Popova
“Boredom is not only an adaptive emotion but a vital one with its related faculties of contemplation, solitude, and stillness. It is essential for the life of the mind and the life of the spirit.”

Anne Lamott
“Jesus would have even loved horrible, mealy-mouth self-obsessed you, as if you were the only person on earth. But he would hope that you would perhaps pull yourself together just the tiniest, tiniest bit – maybe have a little something to eat, and a nap.”

My prayer is that you will choose to live despite the pain of knowing both yourself and the world. Although it is still winter, we know spring is coming.

(This essay first appeared in Letters From the House Between #1 2016.)