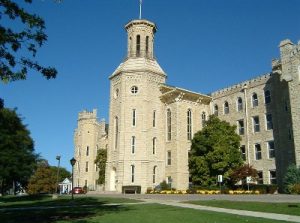 Author’s note: This was originally delivered as a talk at Wheaton College, Wheaton, IL on April 1, 2011, as part of a series of chapel service talks titled “Sexuality and Wholeness.” The theme for this third talk in the series was “Homosexuality.”

I’d like to frame what I have to say today with a story from the Gospel of Mark (10:23-31). In this story, Jesus’ disciples are afraid of being left on the outside of the circle of God’s saving grace. Having just seen a rich man depart with Jesus’ pronouncement, “How difficult it will be for those who have wealth to enter the kingdom of God!,” the disciples wonder about their own fate. If the rich—those who were supposed to be a sure bet as candidates for salvation—may miss the kingdom, then what hope is there for the rest of us?

In an effort to shore up his own chances, Peter blurts out to Jesus, “See, we have left everything and followed you.” He seems to be hoping for Jesus’ affirmation here: Yes, Peter, I can see that. You’re safe! Since you made such a great sacrifice on my behalf, I’ll guarantee you a spot at the heavenly banquet.

Interestingly, that’s not the response Jesus gives. Rather than buttress Peter’s confidence in his own heroic efforts, Jesus undercuts that sort of self-reliance. He says, “Truly, I say to you, there is no one who has left house or brothers or sisters or mother or father or children or lands, for my sake and for the gospel, who will not receive a hundredfold now in this time, houses and brothers and sisters and mothers and children and lands, with persecutions, and in the age to come eternal life. But many who are first will be last, and the last first.”

Notice, Jesus doesn’t condemn Peter’s choice to leave behind his fishing nets and follow Jesus. After all, Jesus is the one who had commanded him to do so (Mark 1:16-17)! Instead, Jesus shifts Peter’s perspective on that act of self-denial. Rather than view it as a badge of honor, or a kind of qualification ensuring him a place on heaven’s roster, Peter should understand his forsaking the life he’d always known as a venture in receiving from Jesus a life so staggeringly full of grace and glory that any sacrifice made to obtain it pales by comparison. If Peter has left behind his family, Jesus says, he receives a new family in his discipleship. If Peter has given up property, he inherits a choicer piece of real estate. If he forsakes a fine house, he gains a mansion. If he gives up his life, then—in Jesus’ favorite paradox—he gains it. Following me, Jesus seems to say, isn’t simply about relinquishing things. It is about receiving the abundance of eternal life.

As you’ll know from the title of this morning’s chapel (if you’re in the habit of checking the schedule ahead of time), I’ve been asked to speak to you on the topic of homosexuality. It was at Wheaton College, during my junior year, that for the first time I told another human being that I was wrestling firsthand with homosexuality. I’d grown up in a Christian home, with two flawed, loving parents. From a young age, I’d been taught the Christian faith, and I trusted in Jesus. I loved Him and wanted to follow Him. Before I was willing to acknowledge, after puberty, the desires for my own sex that I was experiencing in an unremitting, exclusive way, I’d been taught from Scripture that God created marriage for a man and a woman and that gay relationships therefore missed the mark of God’s intention for human flourishing. And yet, confusingly, I found myself, just when all my friends were beginning to notice girls and become interested in dating, having longings to be in that kind of relationship with a member of my own sex.

As a Christian, I needed guidance in how to respond to my sexuality in a way that honored God. But, as you might imagine, I was nervous to tell my parents or my Christian friends in high school about my desires. I grew up in the “Bible Belt,” in central Arkansas, where gay people don’t exactly expect to find the warmest of welcomes.

So I found myself one winter day sitting in the office of a Wheaton professor, telling him my biggest secret. We prayed together that day, we talked about what the future might hold for me in terms of friendships and other relationships, and we discussed God’s compassion and tenderness in Jesus toward those who are broken in the midst of our sinful, fallen world.

As I discovered more about Christianity’s historic teaching, I found myself convinced of the position the church has held with almost total unanimity throughout the ages—that although many people find themselves, through no fault of their own, to have sexual desires for members of their own sex, this is not something to be affirmed and celebrated but is, rather, a sign that we are broken, in need of redemption and re-creation. Gay people are not uniquely broken—that’s a position we share with every other human who has ever lived, or will live—but we are, nonetheless, broken. And following Jesus means turning our backs on a life of sexual sin, just as it does for every other Christian.

That’s the position I remain convinced of to this day, based on what I read about God’s creation of male and female in the book of Genesis and Jesus’ reaffirmation of that ancient teaching. As I think about my life of saying “No” to gay sex and a gay partnership, I find myself thinking of Peter’s impetuous outburst to Jesus, “See, I have left everything and followed you!” I second Peter’s sentiment. I feel, much of the time, that I am turning my back on what would make me happiest and most fulfilled in life. Now that I’m about to turn 30 and many of my married friends are having children, I feel the ache of being without a partner. “Do you see, Lord,” I pray, “all that I am giving up to follow you?”

And it’s at this point that I’m beginning to hear Jesus’ answer to Peter as a word spoken to me, too: “Truly, I say to you, there is no one who has left house or brothers or sisters or mother or father or children or lands, for my sake and for the gospel, who will not receive a hundredfold now in this time, houses and brothers and sisters and mothers and children and lands, with persecutions, and in the age to come eternal life.”

I hear in this a promise that relates, poignantly, to my life: “Truly, I say to you, Wes, there is no one who has left sex or a romantic relationship or marriage for my sake and the gospel, who will not receive a hundredfold now in this time, houses and brothers and sisters and mothers and children and lands, with persecutions, and in the age to come eternal life.”

In the years since I have begun to tell the story of my sexuality to my fellow Christians in the churches I have been a part of, I have found Jesus’ words to be true. Jesus has given me brothers and sisters and mothers and children. Knowing my celibate lifestyle, the Christians I’ve befriended have committed themselves, through the unity secured by the Holy Spirit rather than through biological ties, to being my family, whether or not I ever experience marriage myself. They have invited me into their homes, taken me on vacation with them, and encouraged me to consider myself an older sibling to their children.

But I’ve also experienced the darker side of Jesus’ promise—all of these new mothers and fathers and brothers and sisters are given to me along with “persecutions.” I’m sure I haven’t experienced anything so dramatic as actual persecution, but I’ve known my share of sadness, pain, loneliness, and despair as I contemplate the prospect of lifelong celibacy.

But in the midst of all this mingled joy and sorrow, I’ve also known the hope of Jesus’ final promise: “in the age to come eternal life.” The ultimate gain Jesus holds out for Peter is nothing less than a qualitatively different kind of life, one that never fades, loses its glory, one that encompasses the final renewal of creation itself. And that’s the hope He holds out for me, too—life with God, beholding God, partaking in the newness of life that will come with the resurrection of the body and the unleashing of creation from its bondage to decay (see Romans 8).

If you are here this morning knowing yourself to be gay, or if you are here as a friend of a fellow student who is gay, I want to invite you to think about this double movement of discipleship we have before us here in Mark’s Gospel. First Peter gives up everything to follow Jesus, then Jesus promises him not only a new home and a new family but a new life—eternal life.

If you’re someone living with homosexual feelings, Jesus’ message to you this morning is not primarily a “No” to your deepest self and your deepest hunger. I do believe discipleship to him entails giving up gay sex and gay relationships. And that may be more painful than you can imagine right now in your life as a student (I say as someone about a decade removed from college life). But, ultimately, Jesus is offering you the kingdom. He is offering you eternal life. He is offering you Himself in the gospel. Sacrificing your sexual freedom and sexual expression may seem like a high price to pay—it is a high price to pay!—but He promises you a joy so stunningly great that if you felt the full weight of it now, you would literally come undone.

But I hear one more note in this story that I think applies not only to those with homosexual feelings but also to those here who are not gay. Jesus promises Peter that in leaving his family, he will have a new family. Who do you suppose he is referring to? The answer, I think, is the church. In leaving behind his biological kin, Peter will find a new spiritual family. Which means that all of us who name the name of Christ are meant to be family for one another. We who believe are now each other’s brothers and sisters and fathers and mothers and children. And this means that if one of us is lonely, the others are there to link arms with that person and enfold them back into the family’s fabric. If you are straight and a friend of a gay student, you are that student’s brother or sister through the gospel. Or for that matter, if you are gay and the friend of another gay student, you are that student’s brother or sister through the gospel. You are part of Jesus’ promise to them. God is giving you, in love, to that student who has left everything to follow Jesus.

My prayer for this community is that God will enable you to leave your nets and follow Jesus wholeheartedly, forsaking all to find him. And may God enable you to see your sacrifice—your surrender of your very self—as no ultimate sacrifice. May He open your eyes to the hope to which He has called you, what are the riches of his glorious inheritance in the saints (Ephesians 1:18), and to know Him—the only true God, and Jesus Christ whom He sent—which is the eternal life of the age to come (John 17:3).