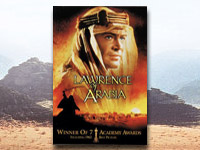 Lawrence of Arabia, academy award winner as best picture of 1962, is perhaps the greatest epic film of all time. One could claim that right for The Godfather, but The Godfather is not an epic in the true sense of the word because the canvas on which it is painted is the world of the city, and the interiors of buildings, not the vast, sweeping outdoors of Nature. The memorable scenes in The Godfather happen in darkened rooms, kitchens, bars, restaurants, but in Lawrence, there is one dominant set, and therein lies the key to this film. Lawrence of Arabia is about a man who seeks to discover himself by finding his place in the world…and his place is the desert.

Simply put, T. E. Lawrence was a young English army officer who helped the British effort in World War I by uniting the disparate Arab tribes against the Turks, creating enough havoc to allow General Allenby to fight, and win, in Palestine and Syria without danger from a vulnerable right flank. But to state it simply is to misstate. Lawrence really was one of the most fascinating and complex characters of the twentieth century, and the movie David Lean (Bridge on the River Kwai, Dr. Zhivago) made about his war experience shows just how fascinating and complex he was.

The movie begins with Lawrence’s death, suffered in a motorcycle accident on a country lane in the garden area of Dorset near his home in England. Remarks by those leaving his funeral take the viewer back to the story of how he became famous. There is little plot to the film. Lawrence is dispatched as a translator by the British to the tents of Prince Feisal, but shows himself to have two qualities that cause him to win the trust of the Arabs over all his superior officers: 1) a deep knowledge of, and love and respect for, the Arab way of life, and 2) a strength of will that seems born from the challenge of the desert. He suggests a daring raid on Aqabah, proposing to cross the uncrossable desert, pulls it off, and the rest, as they say, is history.

But this film is much more than a war film. It explores the ambiguities and difficulties of being the product of one culture, while longing to be the product of another. Lawrence, the Oxford-educated archaeologist—physically awkward, unsure of himself in uniform, quiet, humble, scholarly—becomes “Aurents” when he joins with the Arab tribes in the desert, a leader of men into battle, proudly strutting atop a captured Turkish train with his white robes flowing behind him. But he also becomes a bloodthirsty slaughterer of men, a frustrated defender of human dignity in the face of the Arabs’ cruel ethnic bias against outcasts, and a megalomaniacal believer in his own myth of invulnerability until he is beaten and humiliated by an amused Turkish officer. Lawrence, the dreamer and idealist, comes face to face with reality when the war is over and the Arabs cannot even agree on how to generate electricity in Damascus. Though they have fought and died side by side in the desert, they kill each other over the baubles and trinkets of the spoils of war. In the last scene of the film, a despondent and disillusioned Lawrence slumps in despair as his driver reminds him cheerily that he’s going home to England.

The film has so many exceptional qualities it is difficult to enumerate them. The script by Robert Bolt (A Man for All Seasons) has been called “the greatest script ever written for the medium of film” by no less an authority than Steven Spielberg. The acting is superb: Peter O’Toole and Omar Sharif came crashing into film stardom in this movie, and Alec Guinness, Anthony Quinn and Jack Hawkins play their roles with an élan and clarity that appears effortless. The musical score also won an academy award, as did Lean’s direction.

But the true genius in this film lies in its cinematography. As Roger Ebert put it in his review of the restored and expanded version released in 1989, “It is spectacle and experience, and its ideas are about things you can see or feel, not things you can say.” In one of the most famous entrances in movie history, Omar Sharif rides out of a mirage in the desert, in one long take symbolizing how the Arab way of life flows from the desert and, to survive, must disappear back into it again. The dunes, the swirls, the scrub, the baked, cracked, white-hot sand—all contribute to one overwhelming idea: the desert is harsh and unrelenting, and it will either destroy you or change you into a being not unlike itself—immeasurably strong but primal, cruel, relentless.

W. H. Auden once described Lawrence’s life as “an allegory of the transformation of the Truly Weak Man into the Truly Strong Man.” When, near the end of the film, a half-crazed Lawrence yells “No prisoners!” and leads a charge upon a weary, defenseless Turkish battalion, shooting, stabbing and cutting them to pieces, the camera comes to rest on a blood-soaked Lawrence, unable to understand himself any longer. Such is the price he had to pay to discover strength.

Lawrence of Arabia has recently been released in a two disc DVD that includes an hour-long documentary on the movie and a number of interesting additional features.

1. What was your initial or immediate reaction to the film? Why do you think you reacted that way? 2. What can you add to the above about the role of the desert in Lawrence’s life? What is the “place of place” in our lives? How does the physical terrain of our everyday existence shape both who we are and the way we think and act? 3. In a crucial scene in Prince Feisal’s tent, Lawrence quotes from the Qur’an by heart. What other references to Islam are there in the film, and how do they contribute to the picture the film builds of the Arab way of life? Where you disagree with the message of the film, how can you talk about and demonstrate the truth in a winsome and creative way? 4. The apostle Paul claims “When I am weak, then am I strong.” What does Paul mean by that? How does this compare to Lawrence’s understanding of the development of human character in the movie? 5. There are a great many memorable shots in this movie; which made the greatest impact on you? Why? Lawrence seems to vacillate greatly between the deepest humility and the greatest hubris. In which scenes do you see one or the other (or both) in him? What does the movie teach you about the costs or the benefits of pride and humility? 6. Might the film be a useful point of contact for discussion with non-Christians?