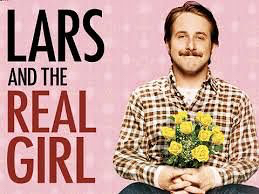 Features & First Impressions
1. Reviewer Louise Keller (Urban Cinefile) writes, “This charmer of a film is one you will never forget. The elements are so bizarre, yet, like the film’s characters, we are able to take a leap of faith and never look back.” What about you? What most captured your attention: the “bizarre elements” or the film’s characters?

2. Given that one of the major characters in the film is a wheel chair bound, plastic sex-doll, it may be helpful to begin by establishing Bianca’s actual role in the film. Did Lars use Bianca for sex? (Be prepared to defend your answer). How would you describe the relationship between Lars and Bianca? What does Bianca provide or do for Lars? How did you find yourself relating to/thinking about Bianca?

3. Another significant character in Lars and The Real Girl is the community that Lars is part of. How might you describe the collective character of this small midwestern town?

4. What other films can you think of that feature community life (whether comedic or dramatic)?

Key Characters & Story Resolution
1. Lars and his brother Gus are the main men in the story. What do we know about these men? How is Lars introduced to us? What does he struggle with (especially externally)?

2. How is Gus presented to us? In what ways is he a contrast to Lars? What would you say characterizes the brother’s relationship to one another? With what does Gus struggle?

3. Why did Lars create Bianca? What does the film tell us about Lars’ past? What present circumstance seems to weigh heavy on Lars?

4. The title of the film is important. By my count there are four significant girls in the story. Who are they? How do they relate to Lars and Bianca?

5. Of these various female characters, who is THE real girl the movie title alludes to?

6. How did the story conclude? Where you satisfied by that ending? Was their closure for Lars? Please explain why or why not?

Basic Theme & Points of Interaction with Christian Faith
1. In light of discussion, how would you summarize what this film is and is not about?

2. Clearly, the advice of the town doctor is questionable. Nonetheless, as a community of believer’s who value truth telling, what might we learn from this film in the general approach taken toward Lars?

3. How is the church portrayed in this film?

5. What do you take away with you from your having viewed this film?

Did you know…
1. The doll employed in the film had nine different faces, each used to show a sort of evolution of the character. Bianca’s face starts out with quite heavy make-up. Later a more natural looking face without make-up is employed. Finally, her face is made up to appear slightly green in order to reflect her “failing health”.

2. To help Ryan Gosling stay in character, the real doll was treated like an actual person (as is done by the characters in the movie). This extended to her being dressed privately in her own trailer and to her being present only for scenes that she was in.

3. In the scene where Lars is reading to Bianca, he is reading from “Don Quixote”, whose main character also has delusions.