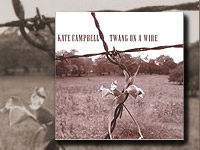 “In each of us…there is part of yesterday’s man; it is yesterday’s man who inevitably predominates us, since the present amounts to little compared with the long past in the course of which we were formed and from whom we result. Yet we do not sense this man of the past, because he is inveterate in us; he makes up the unconscious part of ourselves.”
~Pierre Bourdieu

Southerners have a strong sense of place. In the songs of Kate Campbell one can smell the clay dirt roads of Georgia, picture the kudzu vines of North Carolina, feel the uncontrollable force of the great river of Mississippi. This is tactile music from the heart of a woman who understands the meaning of heritage and home.

Contemporary Americans have lost a sense of place. Like fiddler crabs we scurry from one suburban domicile to another. It’s an ersatz world of designer identities —superficial and terribly the same. It is even eroding what it means to be a Southerner.

“Old Orlando” is lined with cobble-stoned streets and gaslights, giving the impression of history reclaimed. But it’s not. There never was an old downtown Orlando —it is simply a mythic facade used as a setting for tourism.

American Christians have little appreciation for context and physicality —for the weight of the doctrines of creation and incarnation. We are not autonomous individuals shaped somehow by reductionistic rationality. Our identity is derived from our families and from the places we inhabit. We are embodied history. Which is why the sins of fathers are passed down from generation to generation. We don’t know who we are until we know where we’ve come from. For many, homelessness is more than the product of geographic mobility; it is rooted in historic amnesia. Home is ground zero of selfhood.

Kate Campbell is a Southern singer/songwriter. The daughter of a Mississippi Baptist minister, her music is rooted in the glories, ambiguities and sorrows of the American South. Musically, she is compared to Mary Chapin Carpenter, Nanci Griffith, and Lucinda Williams. Her narrative songs are compared to William Faulkner, Flannery O’Conner and Eudora Welty. But such comparisons do her no justice. Here, as few have done before, is a voice that captures the pain and promise of place.

Campbell’s career is also unique. She left a history faculty position at Middle Tennessee State University to pursue music. “I loved teaching, but when I turned 30,” she told the Nashville Scene, “I came to the conclusion that teaching was something I could come back to, that it was something I can do when I’m older. But if I was going to sing my songs, I had to give it a go now.” Her music is the history of a heart, the unconscious memory of a Southerner. Her seven albums are simple, honest, and powerful; her most recent: Rosaryville (1999), Wandering Strange (2001), Monument (2002), and Twang On a Wire (2003). Her songs are soul food. Campbell quotes Flannery O’Conner on the liner notes of Rosaryville: “Art is something that one experiences alone and for the purpose of realizing in a fresh way through the senses the mystery of existence.” In contrast to a world filled with entertainment as diversion, one reviewer wisely noted, “You need this woman’s music in your life.”

Southerners have a strong sense of heritage, but it is a checkered history. How does a child of the South connect his or her identity to a past that is filled with images of slavery and burning crosses? I write as a Southerner. Virginia is my adopted home. I honor the memory of its heroes, Robert E. Lee and Stonewall Jackson. I cried at the recent film Gods and Generals. And yet, my own family was deeply involved in the alleviation of racism in the South. My grandfather served as the Secretary of Negro Work of the Southern Presbyterian Church and was the president of Stillman College in Tuscaloosa, Alabama, a historically black teaching institution. I well remember my father storming out of a little café when he read on the menu: “We reserve the right to serve whomever we want.” Having grown up on the mission field, it was my first memory of segregation. My father’s outrage has left a lasting impression.

History textbooks rarely describe the ambiguities of Southern culture. How then is a Southerner to remember? How is the pride and shame to be faced?

These are questions Campbell, college history teacher turned folk singer, addresses. In her song, “Petrified House,” she tells the story of an aging woman living in a Southern downtown mansion, now surrounded by topless bars and strip malls.

But as the South has changed, there is much that remains the same. It was only last summer that ex-Klansman, Bobby Frank Cherry was convicted for the 1963 bombing of the Sixteenth Street Baptist Church in Birmingham, Alabama, that took the life of four black little girls. The pain of the Civil Rights Movement is still fresh. Of these four girls, Campbell sings:

Four little girls dress up nice
Singing about Jesus, red and yellow, black and white
Dreaming of freedom across the land
And all God’s children walking hand in hand
One deadly blast shattered the peace
Making for a dark Sunday morning on 16th St.
Who can explain such ignorant hate
When the violent bear it away
Bear it away, bear it away
Merciful Jesus, lift up our sorrow
Upon your shoulders and bear it away

In one of her most poignant songs, “Looking Back,” from Rosaryville, she describes the importance of getting the history right and feeling fully both the triumph and tears of the Southern experience. This is wise advice, learned from study, reflection, and life.

I can still recall the night lightning burned the mansion down. We all stood in our pajamas on that hallowed Southern ground. When the flames had turned to ashes only blackened bricks remained and sixteen stately Doric columns there beneath a veil of gray. And it’s a long and slow surrender retreating from the past. It’s important to remember to fly the flag half-mast and look away. I was taught by elders wiser love your neighbors, love your God. Never saw a cross on fire; never saw an angry mob. I saw sweet magnolia blossoms. I chased lightning bugs at night. Never dreaming others saw our way of life in black and white. Part of me hears voices crying. Part of me can feel their weight. Part of me believes that mansion stood for something more than hate.

All of us are rooted in time and place. All our histories bear the scars of both fallenness and grace. Campbell traces these memories through the contours of her heart. In doing so, she helps each of us make our own connections and experience the deeper mysteries of existence. She doesn’t leave her listeners only with nostalgia and pathos. Campbell points beyond to our hearts’ true home.