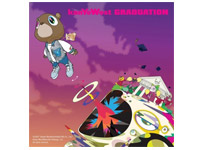 I bought this CD more out of a sense of duty than desire. In the past few years I have found it increasingly hard to listen to Kanye’s music due to his ever-increasing ego. However, as someone who at least attempts to keep up with what’s happening in music I knew I had to get this album. Kanye continues to lead the Hip-Hop world through masterful layering and production.

Graduation is a finely tuned and polished piece of craftsmanship. Musically he continues to bend and break hip-hop, reshaping it into something better. With that said, the lyrical base of the album is extremely disappointing. Where West has ample opportunity to shine he continues to fall into the cliché’s and moral pitfalls of his genre. An example is the track “Stronger.” With its catchy hooks and stellar sampling this song has the most potential on the album.

Unfortunately it suffers from non-stop juvenile lyrics like, “Heard they’d do anything for a Klondike / Well, I’ll do anything for a blonde dike.” Kanye is indisputably a musical genius and my hope is that when he matures a bit as a person he will begin making music that has more depth behind its shine. If you’re a student of culture this album is a must. If you’re not, I’d recommend spending your money on something else.