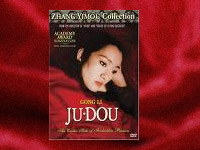 Films by two of what is called China’s “Fifth Wave” of directors demonstrate a simple belief in the individual and in the spirituality of the Chinese people that runs counter to the official secularism of the Chinese state. Ju Dou, a tragic story of forbidden love directed by Zhang Yimou, concentrates on the life of the third wife of a dye factory owner in northwest China in the 1920’s. The wife, Ju Dou, played by the very popular and talented Chinese actress Gong Li, is beaten mercilessly by her bitter and tyrannical husband. She falls in love with her adopted nephew, Tianqing whose faithful love helps her keep her life and her sanity. Over the years they have a child, Tianbai, whose paternity is kept secret in deference to the conventions of the feudal society of which they are a part. Resisting the temptation to kill the old man, they allow their son to grow up thinking his father is Jinshan, the factory owner. In the end, when Jinshan is accidentally killed by Tianbai, Ju Dou and Tianqing are not freed to marry but rather must bow to the decision of the elders of the village who proscribe that Tianqing must move out of the house.

The film is beautifully shot, making the most of a largely interior set in the dye factory, and deftly using the colors of the beautiful silks produced there. Long yellow and red silks blow constantly in the soft wind as they dry in the factory, lending an air of longing for the joy and freedom in love that Ju Dou and Tianqing know they can never have. Superb direction and cinematography and creditable performances by all the actors make it an exceptional film technically, but the strength of this film is its combination of strong story line and political statement.

As Ju Dou and Tianqing stand against the conventions of their community, they stand as symbols of rebellion against the Communist regime that, while coproducing the film through the China Film CoProduction Corporation, still will not allow the movie to be seen in mainland China and refused to allow it to be submitted for the Academy Award for Best Foreign Film when it was released in 1990, even though the Academy had already nominated it. In fact, the movie was made surrounding the events in Tiananmen Square in 1989, and uncertainty about whether the government would allow them to continue halted production for some months. The strong story line, reminiscent of such classics as Shakespeare’s Romeo and Juliet and Sophocles’ Oedipus Tyrannus, places the film in the best tradition of political art: it stands on its own as a sad tragedy, poignant and moving without being maudlin.

Life On a String, a film by Chen Kaige, the first contemporary Chinese director to live and study film in the West, ironically focuses its attention on the need for a revival of the life, hope, and beauty that Eastern, mystical spirituality imparts to the individual. The story of an old, blind holy man who wanders through the countryside, singing songs, playing his sanxian (a musical instrument with three strings, oddly translated banjo in the subtitles), and telling stories to villagers is a fable of the importance of faith, hope and love to the human spirit. The story centers on the fact that the old man, simply called “the saint” or “master” throughout the film, is about to break his thousandth string, after which he may take a secret formula hidden in the sanxian to a pharmacist who will give him a magic potion to restore his sight. He has a blind young apprentice named Shitou who falls in love with a young village girl named Lanxiu. After he breaks his thousandth string and then discovers that his paper containing the magic formula is blank, the old man discovers that to have lived a long life helping people by gladdening their hearts through his music and storytelling is reward enough, that, as he sings near the end of the movie, “All came to me and said, you are not blind, you are not deaf.”

In contrast to Ju Dou, Life on a String is full of nature: the old man and Shitou wander through a beautiful, but desolate Mongolia, with mountains, rocks and a rushing river providing some of the strongest images in the film. The characters, with the exception of the old man, are somewhat wooden, and while the acting is passable, it is not spectacular. But again this film is rescued by its depth of philosophical speculation in the midst of an engaging story. The viewer is kept guessing the entire movie about the relationship of Shitou to the old man, and to Lanxiu, and one of the strengths of the film is its view that wisdom does not flow only from the old to the young. Lanxiu and Shitou end up having some lessons to teach the old man, too. The clear and unashamed portrayal of spirituality and magic, reminiscent of the South American novelists Gabriel Garcia Marquez and Isabel Allende, and the popular recent Mexican film Like Water for Chocolate is refreshing, even if it is animistic in its focus.

I once visited Berlin during the cold war and was saddened by the similarities I saw in the faces of the two Berlins. The realization that modernity had given us the choice of two equally pathetic alternatives shocked me: a despondency bred by the opulent materialism of a spiritually devoid West, or a despondency bred by the depressed materialism of a spiritually devoid East. The spirituality and hope of these two films is at least a welcome alternative to these.