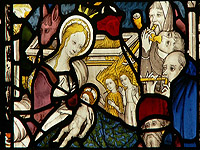 Christmas, the time of magic, the time of mystery. In it’s present manner, surely it’s a bit much sometimes. The pervasive materialism, the shallow celebrations, the common lying of parents to expectant children, frenzied people battling for the last parking place and the playing of “The Christmas Song” exponentially in local malls—ah, Scrooge lives!

And yet there is the innocence of Christmas, of recollections of happy childhoods, church pageants, when the perfect gift was under the tree. Reminders of the love of Christ, humanity worth redeeming, a manger, a cross, the promise, the hope. Yes, it is mysterious and magical.

What of the music of Christmas? Surely it is special, majestic, magical, sweet, peaceful. Suddenly, the ear hears wonderful melody, rich choirs, magnificent orchestras, a plethora of soloist styling’s providing a richness and tranquility often missing the rest of the year. Even Madalyn Murray O’Hair, founder of America Atheists could not deny the beauty of the music of Christmas, evidently sneaking into churches to hear the sweet worship of choirs celebrating the birth of the Lord Jesus.

In this brief overview we will consider a few examples that will hopefully enrich your celebration in the winter wonderland.

O Magnum Mysterium
The mystery of the Incarnation is a recurring theme in Advent/Christmas music. O Magnum Mysterium is a responsorial chant from the Matins of Christmas. (Matins is the early morning or night prayer service of the canonical hours.) Tomas Luis de Victoria (1549-1611) was born in Spain and made his way to Rome to serve in the Papal choir, later becoming the director. His music is in the older practice of the Renaissance: acapella (unaccompanied) settings using imitative polyphony (melodic lines that imitate each other) and homophony (chordal passages) to set words in an ethereal and often peaceful style. O Magnum Mysterium is a wonderful, short setting which captures perfectly the peaceful and awesome nature of the text, which in translation is:

O great mystery
and wonderful sacrament,
that animals should see
the newborn Lord,
lying in a manger!
Blessed is the Virgin
whose womb was worthy
to bear Christ the Lord.
Alleluia!

Two contemporary settings of O Magnum Mysterium come from American composers. Morten Lauridsen (born 1943) is of Danish ancestry and is professor of composition at the University of Southern California. Daniel Pinkham, (1923-2006) was on the faculty of the New England Conservatory of Music. Laurdisen’s setting is for acapella choir using a conservative but highly expressive 20th century style that offers an obvious sympathy for the text that conveys the remarkable idea that the second part of the Trinity would take the form of flesh and blood. Daniel Pinkham’s Christmas Cantata (1958) is patterned after the writing of the great Venetian master, Giovanni Gabrieli (1555-1612). The work is in three movements, utilizing choir, two brass choirs and organ. Pinkham’s exciting use of rhythm and virtuosic writing for the brass easily holds the listener’s attention. O Magnum Mysterium is the text of the 2nd movement where the stark writing for the muted brass and the chant-like setting for the choir cloak the writing in the mysterious. A rousing Gloria in Excelsis rounds off the work in the final movement providing a dynamic ending.

Antonio Vivaldi (1678-1741), known as the red priest for his hair and vocation brought a smile to the high baroque. He is known for writing ba huge number of concertos, including the four violin concertos known as The Four Seasons. His music is rhythmically energetic, generally simplistic (compared to Bach and Handel) and instantly enjoyable. His Gloria is one of the most popular choral works of all time. Being well within the scope of many choirs, the Gloria’s energetic drive and melodic tunefulness assure its popularity.

Handel’s masterpiece, Messiah covers the prophecies about the Christ and then moves to his birth, crucifixion, resurrection and everlasting life. Not a narrative, Handel, the man of the theatre, summons his dramatic skill to clearly and wonderfully set the scriptural testimony to the life and work of Christ. Performed with huge forces or in a chamber ensemble, this wonderful work’s power and beauty is undiminished through time. I recommend listening to the entire work; it has a staggering cumulative effect. Our family tradition is to play Messiah Christmas morning.

The largest of all Christmas works, Bach’s Christmas Oratorio is actually six cantatas (Lutheran musical works used for worship) composed for the entire Christmas season. Written in 1735, Bach provides us with a very complete depiction of the birth of Christ, that takes us from the joyful tidings announcing Christ’s birth calling the faithful to joyful worship, to the Epiphany and the magnificent ending chorus where the passion chorale helps us understand where Christ is headed. Written in the maturity of Bach’s career with astonishing color and texture, this is the work for those who need a richer tapestry for their Christmas celebration.

One of the near-perfect pieces of church music ever penned is Bach’s Magnificat. The song of Mary (Luke 1:46-55) was written for Christmas, 1723 to be performed at the Thomas Kirke in Leipzig. Scored for five soloists (two sopranos, alto, tenor, and bass), choir, and orchestra (with brilliant trumpets and tympani) the work (at roughly 35 minutes) is a great introduction to the great man’s music. Each of the Bible verses is scored in fresh manner with an amazing degree of vocal and instrumental color. Bach’s love of numbers and artistic/theological understanding is clearly seen in the weighting of movements: the gothic arch of the composition and particularly the opening music reappearing at the end of the work round out a meticulously prepared work of worship music.

While I am here let me include two contemporary settings of the Magnificat and Gloria by John Rutter (b 1945). Rutter is responsible for reinvigorating a good deal of church music in the last 30 years. His brassy and percussive setting of the Gloria and lovely setting of the Magnificat have become integral components of the contemporary choral repertoire. His wonderful sense of color and setting demonstrates a masterful technique that makes the best use of the forces involved.

Ralph Vaughan Williams (1872-1958) was an English composer who, as a young man embraced atheism. With a passion for English folk music, he was asked to edit the English Hymnal. Somewhere in the early part of the last century he embraced a spiritual view of life that was sympathetic to Christianity, if not orthodox in theology. Whatever his personal convictions, he set Christian texts for the rest of his life sensitively and beautifully, his final work, curiously enough, was the Nativity Play, left unfinished at his death. Two wonderful works, the Fantasia on Christmas Carols and the Hodie, display Vaughan Williams’ vivid use of color as they embrace the mystical elements of the Incarnation. The Fantasia is scored for choir, orchestra and baritone soloist and is a skillfully put together medley of familiar carols which include the mysterious, rollicking, joyful, and majestic. The ending is a magically peaceful wish for a happy new year. The Hodie is scored for choir, children’s choir, orchestra and soprano, tenor and baritone soloists. A large work (it lasts an hour) employs the children’s choir to tell the story from the scriptures as the other forces comment on the narrative. (A similar effect to that used by Bach in the Christmas Oratorio and the Passion.) The expanse of the large forces and a bewildering number of colors makes this an exciting part of Christmas celebrations. (Check the brass writing on the march of the Three Kings!)

Ceremony of Carols & St Nicolas
Benjamin Britten (1913-1976) composed two masterpieces for Christmas. A Ceremony of Carols is scored for three-part treble chorus, solo voices, and harp. It consists of eleven movements, the texts of which came from “The English Galaxy of Shorter Poems” by Gerald Bullett; the text is in Middle English. The Ceremony of Carols was written as Britten made his way back to England in 1942, an arduous and lengthy voyage across the Atlantic. The composer was known for his adept writing for the voice and the Ceremony clearly demonstrates this wonderful gift, especially with a fine boy’s choir. St. Nicolas was written in 1948 for mostly amateur resources. Britten scored the piece for mixed choir, tenor soloist, strings, piano duet, organ and percussion. St. Nicolas weaves a narrative around the rather sketchy facts of St. Nicolas’ life. Britten’s brilliance as an opera composer is well demonstrated here, his feeling for the dramatic is put to good use throughout the score but especially in St Nicolas’ death.

Carols
Finally, we must not forget the beauty of carols. Carols depict the peaceful quality of the incarnation and the magic of Christmas. There are plenty of collections but some of the best are by Robert Shaw, Sir David Willcocks, and John Rutter. Probably the best known is the service of nine lessons and carols that traditionally comes from Kings College, Cambridge. The alteration of readings and music makes for an exceptionally satisfying musical celebration. Typically, it is broadcast on Christmas Eve in America; don’t miss it.