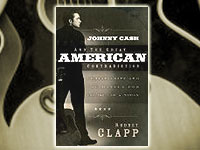 What do country music legend Johnny Cash, Swiss Reformed theologian Karl Barth, and George W. Bush have in common? By most reasonable estimates, little more than their common humanity. But here’s another answer: They all feature prominently in Rodney Clapp’s book Johnny Cash and the Great American Contradiction: Christianity and the Battle for the Soul of a Nation, a creative exploration of the tensions and ironies in the project called “America” through the lens of Cash’s life and music.

Clapp is currently the editorial director of Brazos Press, an imprint of the Baker Publishing Group. He has written extensively for Christianity Today and The Christian Century alike (being one of the few to traverse that divide!), as well as authored numerous books (most recently: Tortured Wonders: Christian Spirituality for People, Not Angels [2006] and Border Crossings: Christian Trespasses on Popular Culture and Public Affairs [2000]). Taking cues from a diverse cadre of Christian thinkers and writers including Henri Nouwen as well as Stanley Hauerwas, Flannery O’Connor and Oliver O’Donovan, Clapp has contended over the years that the Christian Church must be a “peculiar people,” refusing the choice between the politics of the “right” or the “left,” embodying instead an alternative way of being human in the world—one that contradicts the world’s own possibilities in a manner both hopeful and challenging. Johnny Cash gives Clapp his latest platform to rearticulate his hopes for the Church.

Cash was a man of contradictions. Southern through and through, yet possessing a nationwide appeal; a tough-talkin’, hard-drinkin’, steely-jawed man’s man who wouldn’t bat an eye at giving you the finger, yet a practicing Christian who sang at Billy Graham evangelistic crusades and read his Bible and went to church—Cash was a kind of walking microcosm of the unique contradictions of America as a whole. If we can understand how such extremes coexisted in the life and music of one man, Clapp suggests, we might better understand how they coexist in our culture—and what that might entail for our struggle to live faithfully according to the gospel.

What does it mean to be both American and Christian, both patriotic yet ultimately devoted to the kingdom of God? “Christians, precisely as Christians, have something to say to and about America,” Clapp contends. Johnny Cash understood something of the difficulties of that contention, and we can still learn much from him as we live with those difficulties ourselves.

Johnny Cash and the Great American Contradiction: Christianity and the Battle for the Soul of a Nation by Rodney Clapp (Louisville, KY; Westminster/John Knox) 159 pages.