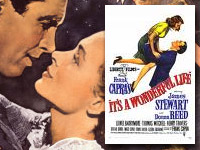 Frank Capra held America in the palm of his hand for awhile; for many he is still the quintessential maker of movies of hope. Director of fifty-two movies spanning five decades, his films were sometimes known as “Capra corn” because their sentiment was so readily apparent and so deeply felt. Pictures he produced were nominated for academy awards five times, winning once (You Can’t Take It With You, 1938), and he took home the Oscar for Best Director three times (It Happened One Night, 1934; Mr. Deeds Goes To Town, 1936; and You Can’t Take It With You, 1938), being nominated for an additional three. If he had not been hindered by the Second World War, there is no telling how much more he would have done; ten of his movies were specifically to aid the war effort.

It’s a Wonderful Life is now generally thought to be his best and most important film. In 1998 it was recognized as number eleven in the American Film Institute’s rankings of the Top 100 Greatest American Movies of the first century of movie-making. Marking Jimmy Stewart’s return to the screen after his time in the war, it moved Donna Reed towards stardom and was filled with supporting characters who were either already famous or were going to be. Gloria Grahame, Thomas Mitchell, Ward Bond and Frank Faylen (the original Bert and Ernie), Beulah Bondi, Henry Travers, and the venerable Lionel Barrymore as the evil Mr. Potter make Life come to life in a way that lesser actors could not have done.

The story is a simple one. A small town banker named George Bailey (Stewart), known for his self-sacrificial deeds of kindness, finally reaches a point of despair and contemplates ending his own life. An angel saves him from suicide by showing him what the world would have been like had he never lived. Wonderful, quaint Bedford Falls would have become evil, sin-soaked Pottersville; numerous people would have been either dead or destitute; Mary, George’s wife, would have been the mousy, spinster librarian of the town instead of the vibrant wife and mother she is. The whole wonderful life that many experience because of George would have been a depressing life of drudgery and defeat. The movie ends with George fighting on and the town bailing him out of his financial crisis to the strains of “Auld Lang Syne” in front of the Bailey Christmas tree.

Capra’s vision provokes a mixed reaction in the Christian. On the one hand, the virtues of decency, hard work, and looking out for the other guy are winsomely promoted; his movies, and especially Life, hold up nicely even in these cynical times. Sex is responsibly presented as the purview of adults who know how to separate mild flirtation from deep, meaningful, married love. While a lax view of alcohol is certainly the rule in Life, it is only fair to remember that such was the standard of the day. At least drunkenness is never presented in a favorable light, as it is for instance in 1946’s Oscar winner The Best Years of Our Lives. Bailey, while attracted to the lights of the big city, notions of progress and building grand buildings, always comes back to reaffirm the superior value of friendship, loyalty, and helping the poor and disenfranchised. The small town virtues of knowing your neighbor and devotion to family are bedrock in It’s a Wonderful Life.

On the other hand, there are dangers in It’s a Wonderful Life that come close to ruining its message of hope provided by a compassionate God. In fact, Life’s God is often a god of the gaps, there when He’s needed, but wholly absent when He’s not. The only shot of a church in the movie is a brief cut during a montage of shots around the theme of post-war America, and while prayer has its interesting place throughout the film (see the first discussion question below), it hardly has a regular place in anyone’s life in the movie. God does answer George Bailey’s famous prayer (“Lord, I’m not a praying man, but if You’re up there and You can hear me, show me the way. I’m at the end of my rope; show me the way, O God.”), but does that mean George is to be a role model for us? He might be the most dangerous type of all: the one who is so good, he doesn’t need God except in a pinch.

But in the end, to fault It’s a Wonderful Life would be unfair; this is a movie to be savored and for the most part appreciated as demonstrating a profoundly Christian world and life view. After all, God does reach down and show mercy to George Bailey, and the movie affirms the supernatural, the strong distinction between good and evil, and a fully admirable ethic based on self-sacrificial love. Yes, the movie famously never punishes the evil Mr. Potter, and it occasionally promotes American values of bigger-is-better and pull-yourself-up-by-the-bootstraps. But for the most part it shows how good life can be when you live it for others in community with them, depending on your Father in heaven to watch out for and protect you. What better movie to show at Christmas?

1. What do you believe about prayer? Is the movie’s view of prayer acceptable? Why or why not? 2. How realistic are the characters in the movie, particularly George Bailey and his wife Mary? How important is that to making a good movie? 3. The movie begins in heaven and offers a distinct picture of how people in 1946 viewed the work of angels. What does the Bible say about angels, and how close to that view was the movie? 4. It’s a Wonderful Life was a flop at the box office when it came out in 1946, despite the presence of one of the era’s most bankable stars, Jimmy Stewart. But over the years, especially since 1972, it has become an enormously popular film. Why is that? What does its popularity in reruns demonstrate about American culture today? 5. At the end of the movie, George receives a note from Clarence on the inside flap of his copy of The Adventures of Tom Sawyer. The note reads, “No man is a failure who has friends.” What is the basis of Christian friendship? How close is the movie to portraying Christian friendship accurately?