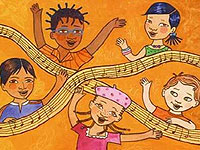 Our children are all over the place with their musical tastes: our 5-year-old son likes anything with a good beat (from rock to bee-bop), our 8-year-old daughter likes Hannah Montana, our 10-year-old son is into alt country, and our 12-year-old is into hip-hop and classic rock. Finding neutral ground for a road trip or in the house is not always easy. Oddly enough, we have found that they all enjoy music from other cultures.

Case-in-point, on a recent trip to Wisconsin we were listening to the Putumayo World compilation One World, Many Cultures. The kids fell in love with the track featuring Idan Raichel, who brings musicians from Israel, Ethiopia and other Middle Eastern countries together to produce riveting songs of faith and life.

This brings me to another key point I’ve noticed with music outside of the Western scope: there is no sacred/secular distinction. Faith is integral to life. This was very clear when we caught Ladysmith Black Mambazo in concert. They opened with a song of praise to Jesus Christ which left me in tears. The rest of the night they sang about love, learning, relationships, family, work, life in community all under the overarching embrace of faith. (Our children became fans of Ladysmith as well when they got to meet them in the lobby after the show.)

One of the record labels providing quality world music offerings for adults and children alike is Putumayo. What I appreciate about their compilations (they have released more than 60 to date) is that they take the time to research the artists, their countries, their customs. With the Putumayo Kids compilations–materials are run by parents, teachers and most importantly children first before they are selected for inclusion on CDs.

The folks at Putumayo have even developed curricula for schools and museums to teach about other cultures using music as a launching point. They have also brought key musical artists to zoos and museums, to bring quality world music to children around the globe.

In our house the Putumayo Kids compilations are like a magnet for attracting the children. While listening to CDs for this article I’d hear feet banging to the beat in our living room, or find children huddled around me in the office listening, or even occasionally peeking in to say, “I like that one.”

So what is Putumayo? The name is that of a river that begins in the South American country of Colombia and flows along the border of Ecuador and Peru until it reaches the Amazon in Brazil. Putumayo’s founder, Dan Storper, had traveled to that region in the early 1970s and was so enamored with its beauty, he decided to name his new handicraft shop after it. Later on the hand made mix tapes he played in these shops became such a hit that he chose to pursue the music business full time. Storper’s goal with the music label was to try to find universal music that all different people can enjoy.

Mona Kayhan, who works the educational side of the house for Putumayo Kids, believes their recordings “give the child and the parent a great way to learn about different cultures.” She says Putumayo’s goal is to get children and adults to hear and understand and appreciate music from all around the world. It’s about exploration, it’s about discovery and that comes through in each collection that Putumayo releases.

As Christians we need to see that when we introduce children (and grandchildren) to other cultures we introduce children to other children who also bear the image of God in their eyes, their faces, their smiles. Music is the one means of expression that can carry a message up and over language barriers. Children know happy and sad whether sung in English, Spanish, Hindi, Greek, Russian or Chinese.

Music helps us understand cultures other than our own; ultimately music from other countries helps us to understand ourselves. I think of my own children’s lineage which draws from German, Irish, English, Scottish, Spanish and a touch of Navajo–music is one way to connect to these cultures. We have friends and family who have served as missionaries in China, Russia, Bulgaria, Croatia and other locations–music is one way we can connect to them. We have friends and acquaintances from Columbia, Brazil, Spain, Kenya, Bosnia, Macedonia, and Holland. While we have not been able to travel abroad, it has been wonderful having them share their lives and their music with us.

One of the cool things Putumayo has created to integrate the education side with the music are their activity kits. Right now they have kits for World Playground and Latin Playground. These come with a CD, a passport, and an activity book for teachers or parents to use. The books feature information about the various countries where the music originates along information about food, dress, customs, a few words, games and activities. There are also details about each song, the artist, the stories behind each song, and the lyrics for singing along.

For other CDs that don’t have booklets there are still very detailed liner notes which are presented in four languages: English, Spanish, French and German.

I highly recommend the CDs and educational materials presented in this article as gifts to children and grandchildren; and I commend them to you as well.

African Playground – 2003
In a land of 50 countries, 1,000 languages and more than 3,000 tribes how does one select 13 tracks to represent the music of this diverse continent? The folks at Putumayo have done well presenting a diverse cross section of tracks from the great continent. Benein, Kenya, South Africa, Congo, Senegal, Madagascar, Uganda, Ethiopia, Nigeria and Cape Verde are all represented here.

Favorite Tracks: Angelique Kidjo opens this collection with “Battu,” a catchy song from Benin. The Mahotella Queens rendition of “Mbube” (aka “The Lion Sleeps Tonight”) is a favorite in our house since we got this CD. Mose Fan Fan’s “Hello Hello” and Tarika Sammy’s “Hendry” instill instant happiness in the heart. The track by Baba Ken Okulolo of Nigeria begins with cacophony and then the groove finds its way and “Laba Laba” takes off.

One World, One Kid – 2006
Seven year old Skylar wanted to cheer up his friend who was struggling with cancer. The result is this tour of world music hosted by Skylar himself. The kids definitely perk up their ears when they hear one of their own telling the stories behind the songs. This CD is now out of print, but you will still find some copies floating around in music shops; I found it at our local library.

Sing Along with Putumayo – 2004
There are plenty of classic kids songs on this release which features well known talents such as Arlo Guthrie, Keb’ Mo’, Taj Mahal and Tim O’Brien. If you don’t know the songs already the lyrics are printed in the liner notes. Caution – some material may cause giggles.

Favorite Tracks: I like the “Bananaphone” song as rendered Rhonda Vincent. Rufus Thomas funky, bluesy, horn saturated rendition of “Old MacDonald” is another highlight. Okay, the voice singing in the “Bellybutton Song” almost hurts to listen to, yet the lyrics about the little, bitty, kind of gritty, lint-laden body part causes a grin to form immediately.

Caribbean Playground – 2004
The CD insert cites that “Caribbean music comes from a mixture of Native American, European, African and other cultures that have all lived in the area.” Countries you’ll sail through on this collection include Jamaica, Trinidad, Haiti, Puerto Rico and more. The liner notes in this CD dispense with lyrics, however there are descriptions of the song content in English, Spanish and French.

Folk Playground – 2006
I remember assemblies in elementary school where folk singers who were traveling the country would stop by and sing classic Woody Guthrie songs along with nursery rhymes with new rhythmic twists. That’s what you’ve got here. Fun songs for kids and adults alike performed by some well-known folkies such as Michelle Shocked and Leon Redbone. Favorite Tracks: It’s hard not to picture Zoe Lewis’ with a red nose and big shoes as she belts out “Sheep.” Former Del Fuego, Dan Zanes, has found his niche with children’s music. Here he performs the song “Hop Up Ladies.” Laurie Berkner is another artists who churns out great, fun music for kids. She is featured playing “Froggie Went a-Courtin’” on this compilation.

Asian Dreamland – 2006
This collection is less about dancing and jumping and more about dreaming and contemplating. The Asian musical palette is probably one that is least familiar to Western ears. Liner notes for this release are in English, Spanish, French and German. Favorite Tracks: Zulya’s “Cradle Song” wisps the listener off to a dreamy world. Kelsang Chukie Tethong’s performance of “Om Ma Nye Bhe Mae Hum” somehow, musically emotes the sense of a mother’s arms comforting you in a rocking chair as you drift between consciousness and sleep. Lastly, the Indian lullaby performed by Ali Akbar Khan transports you into adventurous dream worlds where you are traipsing through Asian lands.

Reggae Playground – 2006
Reggae always gets the feet moving and the mouth smiling. This collection draws from recording artists from across the globe to create a mood shaking musical journey through roots rhythms.

Favorite Tracks: A French man with a groove, Alain Schneider’s “Le Veil Elephant” is great fun. Morocco’s Mousta Largo drives home a solid groove with “Mon Petit Bonhomme.” Toots and the Maytals close out the collection with their roots rendition of “Take Me Home Country Roads.”

Latin Playground – 2002
Latin Playground presents a non-stop jaunt through the music of Latin America. The liner notes include information about the country of origin for each song. Lyrics for each song are also printed in their native language along with English translation. Favorite Tracks: The Cuban classic “Guantanamera” inspires a good mood in all who hear. How can you not dance to this one? Also, the accordion led “Rodopiou” from Brazil is guaranteed to get kids (and adults) galloping around the room.

World Playground – 1998
This tour de force transports you from Senegal to France to Brazil to Australia. This is one of the Putumayo offerings that is offered as a “Multicultural Activity Kit.” You will also find it as a stand alone CD.

Favorite Tracks: The CD opens with the wonderfully upbeat “Fatou Yo” performed by Toure Kunda. Cedella Booker Marley and Taj Mahal deliver a fun version of “Three Little Birds” (a Bob Marley classic). Manu Chao’s “Bongo Bong” is quirky fun fare that will get you making faces and boogie-ing like the “King of the Bongo.”