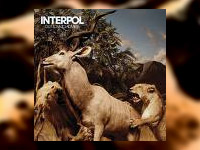 Recorded at the infamous Electric Lady Studios this is the third album from the New York based Interpol; the first on Capitol (a departure from Matador who had released the prior two albums).

Whereas previous albums were guitar-laden and leaning more Joy Division in their sound, this new release adds keyboards and pushes them toward a more produced sound in the vein of Coldplay or Radiohead.

While the melodies move towards pop, their lyrics move towards obscurity. I was looking for a story or a meaningful testimony somewhere in here and did not really find it.

Pioneer to the Falls
Show me the dirt pile and I will pray;
The soul can take three stowaways…

I have never listened to Interpol before, so the first thing that I start thinking about is who they sound similar to. I’d say their styling falls somewhere between Radiohead and Coldplay.

You fly straight into my heart. Girl I know you tried. But here comes the fault.

This song opens with bass and piano riff-ling reminiscent of Nick Cave the Bad Seeds.

There are days in this life; When you see the teeth marks of time.

Note that with Interpol the song titles are often cleverer than the lyrics of the songs themselves.

A very Duran, Duran sounding open to this number.

the pace picks up

spare me the suspense

pace is the trick

A dream of you draped in wires
And leaning on the breaks
As I leave you with restless liars and dealers on the take
And I can read you like a gun
She watched this meeting hall, sweat and shake!
I’ll take you on
You see I’ve got this soul, it’s all fired up

who do you think

Slow decay, I won’t stop fighting yeah
Who do you think that is there?
I came to fight, I am in the air
I know you follow the body

Nobody warned you
Nobody told you
To make up your mind

Interpol are an American indie rock band, formed in 1998. The members of the band are Paul Banks (vocals, rhythm guitar), Daniel Kessler (lead guitar, back vocals), Carlos Dengler (bass, keyboards – commonly referred to as Carlos D.), and Sam Fogarino (drums). Their debut album Turn on the Bright Lights was critically acclaimed, while the follow-up, Antics, has been both a commercial and critical success.