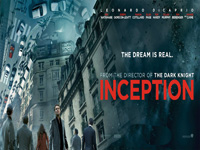 Reality Revisited
Pardon him, Theodotus: he is a barbarian, and thinks that the customs of his tribe and island are the laws of nature. [George Bernard Shaw in Caesar and Cleopatra]

Shaw has had lots of fans in recent years. “Constructivists,” as some are called, think that knowledge has much more to do with social interactions than reality. The upside to this is obvious: freedom, freedom from taking the tension of our differences too seriously and freedom to go with what one feels is right. It’s a freedom Hollywood has long celebrated in films like Dead Poets Society (1989) and Pleasantville (1998).

Christopher Nolan isn’t an old-fashioned barbarian, but at the very least he sees a downside to not knowing. For example consider his latest film, Inception. Cobb (Leonardo DiCaprio) is an Extractor, a thief who makes his living by entering the dreams of others and stealing their ideas. It is quite a lucrative business, but for him it has several downsides: it’s dangerous and, thus, exciting (for us if not for him); it cuts him off from his family for reasons you should learn only by watching the movie; it is confusing. The last in Nolan’s opinion may be the worst.

At first glance Inception is a typical summer movie, teeming with romance, action, and stunning visuals. Cobb is blackmailed by Saito (Ken Watanabe) into using his dream-walker skills to plant an idea in the mind of a business rival. With the help of Ariadne (Ellen Page), Arthur (Joseph Gordon-Levitt), Eames (Tom Hardy), and Yusuf (Dileep Rao), he concocts a scheme complicated enough to confuse Sherlock Holmes.

Thankfully even as it embraces the summer movie motif, Inception transcends it, and its sizzle makes its steak all the more satisfying. The story within Inception’s story is Cobb’s story, a story filled with questions. He and his wife Mal (Marion Cotillard) once chose to live in their shared dreams. In them they enjoyed god-like freedom to create a world in their own image, according to their own imaginations. But their delight in it was tempered by troubling questions: Is it really real? If it isn’t what is? How can I know? Give Nolan credit here: he’s not content to sweep these nagging doubts under the rug and enjoy the fruits of freedom. They obviously drive him crazy and through him, Cobb.

Constructivists think asking such questions is a no-win situation, as Stanley Fish once famously pontificated: “I would believe in absolute truth, if there was an explanation of reality which was independent of the standpoint of the observer.” If he’s right, then all perceptions as far as we know are just perceptions, all are equally trustworthy and untrustworthy, and the question “What is real?” becomes impossible to answer. If he’s right, then so is Saito, when he tells Cobb, “Don’t you want to take a leap of faith? Or become an old man, filled with regret, waiting to die alone?” And Mal is right when she begs Cobb simply to forget the questions and love her: “You’re waiting for a train, a train that will take you far away. You know where you hope this train will take you, but you can’t be sure. But it doesn’t matter, because we’ll be together.”

How does Cobb answer the questions? Well, just as no good question is ever answered well just in theory, you’ll need to watch Inception to appreciate how Cobb deals with his dilemma. But before you do, let me encourage you to do two things. First, watch Nolan’s Memento (2000); it’s a more confusing film in many ways than Inception, but clearer in its revelation of Christopher Nolan’s worldview. Then, read chapter 1 of Romans. Paul argues that there are a couple of things that we cannot not know: that God exists and that we are guilty. One imagines that Paul and Christopher Nolan would have much to discuss after watching his film. I cannot imagine a better film to discuss after watching it with friends of my own.

1. What were you thinking about as this film ended? 2. What images from the film linger most vividly in your mind? Why do you think you were struck by them so forcefully? 3. In one of Inception’s central scenes 19th century opium dens are recreated by dreamers instead of drug-users. How did this sequence make you feel? Why do you think you felt this way? 4. Miles, endearingly acted by Michael Caine, plays the professor, a central figure in Cobb’s life. What does he represent to Cobb? What is his role in advancing the story? 5. Nolan recently remarked, “I like films where the music and the sound design, at times, are almost indistinguishable.”(He lists Pink Floyd’s The Wall as one of his influences here.) Discuss his use of sound/music in Inception. Did it interfere with your perception of the film or undergird it? 6. In your opinion is romance presented positively or negatively in Inception? How does it aid and/or hinder Cobb from resolving his dilemma? 7. Early in the film Saito challenges Cobb, saying, “Don’t you want to take a leap of faith? Or become and old man, filled with regret, waiting to die alone?” What does he mean by this? What is he challenging Cobb to do and why? 8. Cobb’s usual goal is to steal ideas. In Inception he’s forced to plant an idea, which is both more difficult and more powerful, in his words, “The seed we planted in this man’s mind may change everything.” Discuss how the power of ideas is presented in the film. Do you agree with Cobb’s assessment here or not? Defend your answer. 9. What is the chief danger Cobb faces in Inception? How in the end does he face it? Does he find answers to his questions? What are they? Do you agree with him/them? What is he certain of in the end? 10. At the end of the movie, does the top fall or not? Defend your answer, not in terms of what you want to happen, but from what you’ve seen in the film. 11. If you were privileged enough to view Inception with Christopher Nolan, what questions would you like to discuss with him afterwards?