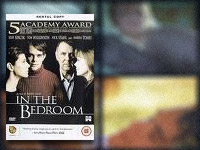 In the Bedroom, the writing and directing debut of actor Todd Field, is one of those character-driven, intricately plotted, so-called “small” films which has so many themes, so many things to say, that the lesser examples of the genre fail miserably because they fall self-indulgently into philosophical complexity, leaving the characters, and with them the viewers, behind. Confusion and dissatisfaction result and the audience goes away bewildered and unhappy. Bedroom, however, never leaves its characters behind and succeeds brilliantly because of it. Matt and Ruth Fowler, played by British actor Tom Wilkinson and Academy Award winner Sissy Spacek, are the perfect couple in the perfect American town of Camden, Maine, but their perfect, controlled life is savagely destroyed in one moment of horror. Spinning hopelessly toward a conclusion that cannot be assuring, Bedroom tells a story of love, passion, revenge, obsession, weakness, miscommunication (and plain old lack of communication), and, most of all, of feeling trapped in a cage of injustice with no way out. It is a parable of our time, a stark and disparaging view of the dysfunctional American family, striving to live “normal” lives with absolutely no resources when the bizarre and the appalling challenge their ostensibly secure existence.

Matt is the family doctor, Ruth the conductor of a choral group at a local high school; they have one adored son, Frank (Nick Stahl), recently graduated from high school and working as a lobsterman for the summer before he goes off to college. A fly has gotten into the ointment, however, in the person of Natalie Strout (Marisa Tomei easily in her finest role ever), a young, divorced mother of two who is neither the social nor the educational equal of Frank. Ruth fears and despises her, not least because she sees Natalie as the older predator to her son Frank and the younger vixen to her husband Matt’s fantasies. The fly becomes a much more serious monster when Richard, Natalie’s soon-to-be ex-spouse, shows up more often, growing angrier and more threatening each time. Events take their course: Richard murders Frank, but is soon released from jail, and Matt and Ruth must now face life without their son and with his murderer free. They experience tension on every side—from their multi-grandparent friends, a legal system that proves inept, and most of all from each other as each blames the other for failing Frank and ultimately letting him die.

Field’s film, co-written with Robert Festinger, is a masterpiece of misdirection, of fragile hopes dashed. Bedroom begins with scenes of Frank and Natalie idyllically romping in the grass and on the beach, Ruth and Matt playfully jostling each other in bed, a comfortable neighborhood picnic, a Saturday morning of lobstering where Matt helps Frank and teaches Natalie’s son Jason about lobsters. It is here that Matt reveals the idea behind the title of the film (another misdirection in that the movie does not even have one on-screen sex scene). Picking up a lobster missing a claw, Matt explains to Jason that when two lobsters, one male and one female, are joined by another “in the bedroom,” as the lobster traps are called, somebody loses a claw…or worse.

Each of the characters is developed thoroughly; even the town becomes a character, peaceful and safe, full of friends and family. All appears so stable that even the problematic Richard seems only a small cloud in a beautiful blue sky. This dependability is so well established that as the plot unfolds, the viewer has the feeling that something will happen to make everything all right. That something never occurs.

For those who love beautifully shot movies, In the Bedroom, despite its dark content, will be a delight. The use of extreme close-ups (a wedding ring at a funeral, lips mouthing platitudes, coins jangling in pockets drowning dialogue), montage, and composition are remarkably fitted to the effects they intend. A sequence after Frank’s death in which Ruth watches TV and smokes cigarette after cigarette is one of the best montage sequences I have seen in a long time, the super-slow fades emphasizing the achingly sluggish pace of life when grief and emptiness consumes one. Frank’s closer relationship with Matt and his more distant one with Ruth are stressed regularly by their placement in the frame; one particularly poignant late night non-talk seats Frank at the extreme left of the screen, Ruth at the extreme right, the hard wooden table of their kitchen, and of their rapport, separating them.

The Christian heart will be rent by the story told in In the Bedroom. The Christian God, so full of forgiveness and redemption, is absent in every way. The church lacks any resources to face the difficulties Ruth and Matt face. When Ruth visits the priest, all he can tell her is a distinctly insensitive and vapid story that proclaims, “Lots of women have lost children; get over it.” At Frank’s funeral, Father McCasslin doesn’t even read Scripture; sappy poetry brings no comfort. There is no gospel that listens or prays, much less one that comforts or hopes. Life may appear happy, but it is at all times one moment away from despair and endless emptiness.

In the end, Matt and Ruth act to try to relieve their pain. The film rightly and brilliantly leaves ambiguous whether or not they succeed, even in a limited sense. But the closing shot, a widening and pulling back until the whole town of Camden lies under the viewer’s eye, peaceful and serene on the surface, but bleeding and festering with unspeakable wounds underneath, whispers the fear that meaninglessness brings overall. There is no hope, even in, or perhaps especially in, the bedroom of this existence.

1. This movie has very little mention of God, either directly or indirectly through symbol, etc. How would it have been different if it had tried to show Him as an active “character” in the plot? 2. The film was written from a short story by Andre Dubus. What are the differences in theme and perspective between the film and the short story? Much is made of the failures of the two main characters, Matt and Ruth, in raising and protecting their son. Did either fail him? In what ways? What did you learn about the practice of raising a child from this movie? 3. The character of Natalie is a tragic one in the movie. What do you think constitutes the center of the tragedy surrounding Natalie? 4. Pain is inflicted on every side in In the Bedroom. Describe the scenes in which the pain is the worst according to your opinion. How could it have been avoided? After being caused, how could the pain have been alleviated? 5. This is a realistic story, told in a strongly realistic style. How does “real” life differ for you from the life Matt and Ruth live? What could they have done differently in order to live life better?