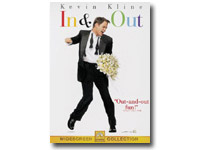 If you have ever said to yourself or someone else, “I’m in the mood for a mindless comedy. I just want to laugh tonight,” then maybe In & Out would be a good choice for a movie. Comedically, the timing is crisp, the characters are physically and verbally very funny and the satire that runs throughout seems to take at least a little jab at almost everyone.

In & Out is also, however, most definitely a film with a message, and that message comes across with such a complete absence of subtlety that you might, ironically, miss it altogether in the humor. In this discussion, we are going to look at the use of comedy as a means for communicating, evaluate its effectiveness and hopefully develop a deeper sense of compassion for hurting and broken people, of which we all are. This film covers controversial subject matter. Remember this as you discuss the film so that your conversation won’t be sidetracked by angry words.

Quotes and Moments
Stereotyping Sexuality (according to this film):
Real men…
wear masculine attire, are not bothered by slovenly dress, say things like “Yo!” and “Hot Damn.” They don’t dance under any circumstances, have no rhythm, grace or pleasure. They work, drink and have bad backs. Use and enjoy pornography, kick, punch and bite ears. They identify with John Wayne and Arnold Schwartzenegger, are bumbling jocks, and are very uneasy around homosexuals.

Homosexual men…
Love the movie Beaches, constantly listen to “Macho Man” by the Village People, and walk and carry their hands a certain way. They like poetry and literature, are smart, well dressed and clean. They ride bikes, are aware of colors that clash and those that go well together, like Barbra Streisand, and prefer good grammar. They use their napkins, are fans of Richard Simmons, are sensitive, and are prone to sex-change operations and talk funny.

Sonya: But I promised Isaac I’d do his show. The new collection is this afternoon. I have to shower and vomit.

Emily: I lost 75 pounds! You’re sorry? After I wait for you my entire life? After I base my entire concept of self-esteem on the fact that you’re willing to marry me? Thank God my parents are dead! This would have killed them!

Peter Malloy: I was tired of lying to those people I love. One day I just flipped out and said, ‘Mom, Dad, Sparky… I’m gay.” My mom cried for exactly ten seconds, my boss said, “Who cares?” and my dad said, “But you’re so tall…” Everyone surprised me by being okay when I let them.
Pastor: “Do you, Howard, take this woman to be your lawfully wedded wife, to have and to hold until death do you part?”
Howard: “I’m gay.”
Howard: “Do I look gay to you?”
Mr. Halliwell: “I don’t know. Would you walk for me?”

…Howard visits the confessional and the priest gives him very unconventional advice.
…Howard’s parents react to his coming out.
…Emily reveals her previous weight problem.
…Peter kisses Howard and tells him, “You noticed.”
…All the Freudian slips running through the entire film.
…Peter describes coming out as simply a matter of being honest with those you love, clearing the air.

1. Was there anything about the cinematography or music that stood out to you? If so, what? 2. What did you find redeeming in this film? What did you find offensive? 3. What do you think was the overarching message of this film, if there was one? 4. Hollywood seems to be making fun of itself at the awards ceremony. Why do you think they did this? If this film had a message, did the Oscars segment help to communicate it? 5. Which cast member do you think out-shined the others? Why? 6. What are some of the ways human sexuality is described in this film by its characters? 7. When the boys are in the locker room, what is the nature of their conversation concerning homosexuality? How is marriage portrayed in this film? Consider the following characters treatment of marriage—Howard, Emily, Frank and Berniece Brackett, the priest in the confessional. 8. In your opinion, is human sexuality dignified in this film? Why or why not? 9. Are you satisfied with this film’s treatment of sexual issues—particularly homosexuality? If so, why? If not, what was missing? 10. What assumptions are made concerning how a person determines if they are homosexual or not? Where in the film are these assumptions made? Do you agree with them or disagree with them? Why? 11. What is said to be the reason and outcome of coming out? 12. Trace Howard’s path to admitting his homosexuality, including his moment of coming out. Do you think this is how it works in real life? How does he come to believe it about himself? 13. Once Howard comes out, do you think the fall-out over his pronouncement is too much or too little? Why? 14. In the beginning of the film, do you think Howard was actually gay? Or did he become so as a result of the media frenzy? 15. Emily used to be obese. How is her battle with weight portrayed? Is it funny? What comedic value was added by attributing her weight loss to Richard Simmons? What is your reaction to her self-image issues? 16. After Howard confesses he is gay, are you satisfied with the exchange he and Emily have in the back room of the chapel? 17. Who are the primary “voices of reason” in film? Do they have anything in common? 18. What was your reaction to Peter and Howard’s kiss? 19. Did you like Cameron Drake? Was his character consistent throughout the movie or did it change? 20. What did you think of Cameron’s girlfriend, Sonya? How are Christians portrayed in this film? How is small town Indiana portrayed? How much of the different portrayals of people and places were strictly for the sake of comedy? 21. Where is each character’s purpose in life found? What did you make of Frank and Berniece’s renewal of vows? 22. Who does this film dignify? Who does it offend? In your opinion, is this film helpful for the homosexual community? Why or why not? 23. Does this film adequately resolve its loose ends? Does it pretend to? 24. Should Howard have been fired? Why or why not? If you were at the graduation ceremony, would you have stood up for Howard or remained in your seat? Why? Does this film have a contradiction concerning the “influence” gays have on people? If so, what is it? How are people devalued for the sake of the message? What is your reaction to this? How can this devaluing lead you to true compassion for homosexuals? For people with eating disorders? For Hollywood? For victims of stereotypes? 25. How might this film be used as a point of contact for discussions with non-believers? 26. How is this film a window of insight into how a Christian should live, think and act as you seek to extend the love of Christ to the watching world?