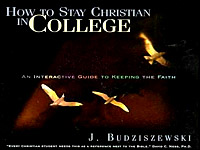 “At the age of ten I had committed my life to Jesus Christ and was baptized. As a teenager I had not been a mature believer, but I had certainly been an enthusiastic one…Why [did] I fall away from faith? For many reasons. One was that I had been caught up in the radical politics popular among many students…I had my own ideas about redeeming the world, and my politics became a kind of substitute religion. During my student years I had also committed certain sins that I didn’t want to repent. Because the presence of God made me more and more uncomfortable, I began looking for reasons to believe that He didn’t exist.”

While earning his Ph.D. at Yale, J was convinced he’d found plenty of reasons for atheism and moral relativism, so much so that the latter became more than a personal faith to him; promoting it became his career. “Eighteen years ago, I stood before the Government Department at the University of Texas to give my here’s-why-you-should-hire-me lecture. Fresh out of grad school, I wanted to teach about ethics and politics, so I was showing the faculty my stuff. What did I tell them? First, that we humans beings just make up the difference between good and evil; second, that we aren’t responsible for what we do anyway. For that, I was hired to teach…”

“How then did God bring me back? I came, over time, to feel a greater and greater horror about myself—an overpowering sense that my condition was terribly wrong. Finally it occurred to me to wonder why I should feel horror if the difference between the wonderful and the horrible was something we humans make up. I had to admit that there was a difference between the wonderful and the horrible after all. And that meant that there had to exist a wonderful, of which the horrible was the absence. So the walls of my self-deception collapsed all at once.”

To his credit J not only reaffirmed his faith in God, he changed his academic goals. He turned from the study of relativism to natural law (see his Written on the Heart, IVP, 1997). Even more importantly the man who once tried to undermine the faith of his students is now perhaps the most eloquent and out-spoken Christian witness on the University of Texas faculty.

He wrote How to Stay Christian in College with three needy groups in mind: Christian high school students who plan to go to college, Christian students (especially freshmen) who are there already, and the parents of students. The shortage of good books on apologetics written for this audience is a pity, for no one needs them more. How to Stay Christian nicely fills the gap between such excellent books as Susan Maculay’s How To Be Your Own Selfish Pig (David C. Cook, 2001—for younger students) and Steve Garber’s The Fabric of Faithfulness (IVP, 1996—for more mature students).

The style of How to Stay Christian is pure USA Today: wide margins with big type and lots of highlighted boxes full of catchy quotes, comments, and questions. At first glance readers of J’s articles in First Things may find this disappointing, but only at first glance, for How to Stay Christian is a rare example of the triumph of substance over style. In this book, J not only tackles the intellectual issues of the campus—the world’s ideas vs. God’s ideas—he is immensely practical. Chapters on loneliness, sex, dealing with hostile teachers, even “Holding Your Own Without Being a Jerk” make faith a matter of doing, not just knowing.

Perhaps the best thing I can say about How to Stay Christian is simply this: after reading J’s book, one knows that he hasn’t only read lots of good books; he has spent hours enjoying the company of real students. To those of you who know and love real students, I heartily recommend this book.

How to Stay Christian in College by J. Budziszewski (Colorado Springs, CO: NavPress; 1999) pp. 140 plus notes.