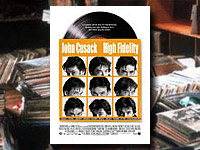 Rob Gordon, a not-so-thriving independent record store owner in Chicago, makes lists: Top 5 dream jobs, Top 5 songs for any situation, and Top 5 break-ups. Unable to commit to his girlfriend, either to hold on or to let go, Rob analyzes his past relationships in an attempt to understand his lists, and, thus, himself. This film, based on a Nick Hornby book, is certain to be a classic among current late-20-somethings, though the questions it asks, at the same time humorous and very human, are relevant to everyone.

Notable Quotes (all from Rob)
Should I bolt every time I get that feeling in my gut when I meet someone new? Well, I’ve been listening to my gut since I was 14 years old, and frankly speaking, I’ve come to the conclusion that my guts have shit for brains.

What came first, the music or the misery? People worry about kids playing with guns, or watching violent videos, that some sort of culture of violence will take them over. Nobody worries about kids listening to thousands, literally thousands of songs about heartbreak, rejection, pain, misery and loss. Did I listen to pop music because I was miserable? Or was I miserable because I listened to pop music?

It would be nice to think that since I was 14, times have changed.

Relationships have become more sophisticated. Females less cruel. Skins thicker. Instincts more developed. But there seems to be an element of that afternoon in everything that’s happened to me since. All my romantic stories are a scrambled version of that first one.

I can see now I never really committed to Laura. I always had one foot out the door, and that prevented me from doing a lot of things, like thinking about my future and… I guess it made more sense to commit to nothing, keep my options open. And that’s suicide. By tiny, tiny increments.

1. What is your initial emotional response to the film? Do you feel depressed, hopeful, melancholy, amused, merely entertained, or something else? 2. In the opening scene, and throughout the film, Rob addresses you, the audience. What effect does this “conversational narrator” have on you, and why do you think the director chose this method? 3. Do you feel any sympathy for Rob, and does that change throughout the movie? Is there a recognizable turning point for him in the film? If so, what causes that change? 4. Why does Rob keep lists? What is the appeal of making such lists? Is there danger in keeping/revisiting the subjects of such lists? What is the difference between biblical remembrance and nostalgia, which is an abuse of memory that tries to remember only the easy parts? In short, what keeps us from “getting over” things? 5. In what sense are all of Rob’s relationships a version of his first? Is that a pattern for most people? Does this have anything to do with the concept of generational sin? How prevalent is the goal of “finding a mate” in influencing our decisions? What might account for the differences in percentages between two single people, especially? How has the church responded to this? Thinking about the behavior of the employees in the record store, what accounts for cultural snobbery/elitism? In what areas is the church guilty of this? Is there ever a sense in which the church should hold onto a form of snobbery? 6. Why is music such a powerful force in so many people’s lives (consider Rob’s autobiographical categorizing of his albums)? How should the church respond to this? 7. What is the appeal of artists, especially musicians? What is the biblical definition of idolatry, and how does it relate to this? Maybe on a related note, what is the effect of “movie scene moments” on our lives? What is the biblical view of such moments? 8. How does personal change affect relationships, especially romantic relationships? When is personal change healthy and when harmful? Why might we seek to retard change in the other in a relationship? More and more, we see a cultural desire “to hold on to youth,” “not to sell out,” to avoid “being boxed in” or “bored.” What accounts for this? Is this legitimate (how much is a right response to an abuse and how much a failure to “grow up”)? How should the church respond? 9. Rob tries to make himself feel better by contacting his old girlfriends. What exactly is he looking for, and what does he find? Are his conclusions legitimate? Have you been in a position where you’ve dredged up an old relationship under the banner of “making sure I’m forgiven” or “letting her/him know that I’ve forgiven her/him”? If so, have you seen other motives in that? 10. Rob says, “What matters is what you like, not what you are like.” Do you agree? How might different generations answer this, and what would account for those differences? What are the questions we ask people when we first meet them? What do those questions reveal about our understanding of identity? 11. When asked why he wants Laura back so badly, Rob isn’t able to provide an answer. Why hadn’t he considered that before? 12. Rob’s five dream jobs are almost laughably unreachable, an interesting parallel to his five relationships. What is the parallel? Is there a place for holding on to “dreams”? 13. Rob admits at one point that Laura is everything he’s ever wanted, and almost immediately after that, he begins flirting with the music columnist in the record store. What accounts for that? 14. As he’s making a mix tape for the music columnist, Rob says, “When is this gonna stop?” What brings him to this point? Do you think he stays with Laura after the credits roll? 15. Discuss notable quotes #3 and #4 above. 16. This film is on its way to attaining cult status with late 20-somethings. Why, and how should the church respond to cultural hallmarks like this?