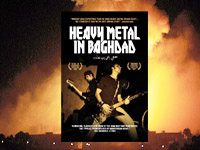 The Right to Thrash in Post-War Iraq
Despite the enthusiastic fan base (albeit small) heavy metal is not a welcome musical style in Iraq. To hard-liners it represents an embrace of Western ideals and thus is frowned upon. The musical genre, which had found some funding for public concerts under Saddam, is not welcome under the current regime. That’s not to say that Saddam was a more gracious ruler or that he was necessarily a heavy metal fan.

There is so much to absorb in this film which focuses on young, college educated men trying to make a go at life in post-war Iraq. They work hard to support their families and to work towards the dream of playing the style of music they love most. A series of heartaches plague the band and ultimately they are broken up for a time, only to re-unite in the refugee settlements in Syria.

This film weaves a fascinating story about the bandmates and providing a unique glimpse inside of the new Iraq–a county who still has huge security hurdles to overcome for both visitors and residents. A country whose biggest challenge is avoiding the drain of young, educated, professionals from their workforce.

Heavy Metal in Baghdad will have you rallying around the lives of these young men and their musical dreams. There are a number of interesting twists that have come about for the band since the film’s release. Please wait to Google the band (Acrassicauda) until after you’ve seen the film.